Nature protection groups are opposing the recent plan by the government to build more villages and add to the population on the Golan Heights. 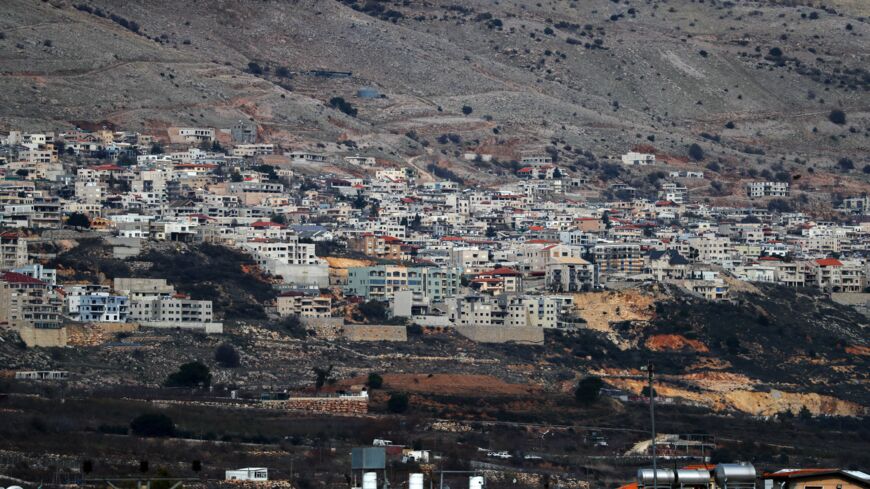 This picture shows a general view of the village of Majdal Shams in the Israeli-annexed Golan Heights, on Dec. 28, 2021. Israel's government approved on Nov. 26 a 1-billion-shekel plan ($320 million) five-year plan to double the Jewish settler population in the Golan Heights, a strategic area that Israel seized from Syria in the 1967 Six-Day War. - AHMAD GHARABLI/AFP via Getty Images

Some dramatic declarations emerged from the special Cabinet meeting Dec. 26 at Kibbutz Mevo Hama in the Golan Heights. The meeting opened with a statement by Prime Minister Naftali Bennett: “This is our moment. This is the moment for the Golan Heights. A combination of circumstances has led us today to a dramatic government decision to channel considerable resources, around NIS 1 billion, to strengthening communities on the Golan Heights.”

Bennett was of course well aware that the international community, considering the Golan Heights occupied territory, would not welcome this plan with open arms. Thus, he tried to overcome the diplomatic obstacle by citing American support for Israel’s control of the region, with the Trump administration recognizing Israel sovereignty and the Biden administration not retracting from this policy.

The decision approved by the government includes more than half a billion shekels for planning and creating the necessary infrastructures to add 7,300 housing units in the next five years. These are to be divided as follows: 3,300 units in Katzrin, and 4,064 units among the various settlements of the Golan Regional Council. The latter will include several hundred units in the Trump Heights village, whose first residents are already living in temporary housing at the site until their permanent homes are built. Another 4,000 housing units are planned for the two villages of Asif and Matar. All in all, the target of the government’s decision is to double the number of residents in the Golan and Katzrin in the coming years by adding another 23,000 people to the region.

The plan also has a clearly defined program to transform the Golan Heights into “the technological capital of renewable energy in Israel.” This will be achieved, explained Bennett, by promoting local research and development in sustainable energy there, including solar energy and wind turbine technology.

However, environmental organizations have expressed their opposition to the plan for several reasons.

First among these is the environmental damage that will inevitably be caused by the construction of new localities since this eliminates even more open spaces in the region. The Society for the Protection of Nature in Israel (SPNI) released this statement in a tweet: “For the most part, the government’s decision offers destruction and ruin to the Golan, its natural environment and its expansive open areas, home to hundreds of species of wild plants and animals, drawing millions of visitors every year. The Golan will suffer significant critical damage for the sake of new localities, infrastructure and energy initiatives. The establishment of new localities makes no sense from a planning, social, environmental or economic perspective. The cost-efficiency of a new settlement is negative by every parameter, especially when compared with strengthening and expanding existing settlements. This is certainly true in the Golan, where many existing settlements are desperate for a boost.”

The Planning Administration, Israel's main planning body devoted to national planning, holds similar opinions to that of SPNI. In an opinion paper on the topic published a month ago, it wrote, “Proper planning policy involves giving clear preference to the expansion and strengthening of existing settlement. The creation of new settlements should be avoided, except in exceptional and unusual cases. Furthermore, increasing the number of settlements runs counter to the planning approach of centralizing development in urban areas and preventing suburbanization, as well as the protection of a contiguous stretch of open space and dependence on existing infrastructures.”

The problem is that the government decided to ignore these positions. One senior government official told Al-Monitor that in the periphery, including the Negev and the Golan, large open spaces demand the establishment of new localities.

The issue of wind turbines in the Golan Heights faces even greater opposition. Environmental organizations, and especially Shomrei HaGolan (Guardians of the Golan), had hoped that the defense establishment would oppose the construction of enormous wind turbines, which has been in the works for a very long time already, because it could interfere with air force maneuvers in the area.

Then, two days after the government met in the Golan, the Ministry of Defense announced that it had signed an agreement with Energix to construct 41 more huge turbines in the northern Golan Heights to produce electricity from wind power. According to the Ministry’s statement, “This is another significant milestone in the national effort to produce energy from the wind.”

Like other countries around the world, Israel has committed itself to reducing the amount of greenhouse gases and carbon emissions it produces. These wind turbines are intended to be part of that effort.

Shomrei HaGolan and most other environmental organizations think differently. Position papers they produced contend, among other things, that the construction of these wind turbines would be harmful to a national natural treasure, as it will result in hundreds of wind turbines covering the volcanic hills unique to the Golan Heights. This, together with the attendant infrastructures, will alter the Golan completely, transforming it from a pastoral natural treasure into a region devoted to electricity production. They also say that the turbines’ blades, which can spin at a speed of 300 km per hour, are deadly to birds, bats and insects, and could result in the extinction of entire local species, including vultures of different sorts.

The most interesting argument, however, is that these turbines will produce less than 1% of all of Israel’s electricity needs, and even then, only if they operate at full capacity. The cost of this electricity will be more than twice as much as electricity being produced today by solar facilities and natural gas.

One environmental activist, Eyal Gary, attempted to speak with the ministers who attended the meeting in Mevo Hama, but to no avail. In a letter addressing Bennett Dec. 14, he wrote, “If the ecological systems fail, even a trillion turbines won’t help. One problem should not be solved by creating another. This is going to be exactly like the Dead Sea and the Hula Valley (one drained partially, the other drained almost fully, for different reasons). The only difference is that back then there was no awareness and the need to act was existential. We are in a different place now.”

The environmental organizations’ main hope is that the recent decision, like most government decisions concerning the Golan, will barely be fulfilled, if at all. Should that happen, the Golan’s natural beauty will be spared.