Relocating its weekly meeting to the Golan Heights Kibbutz Mevo Hama, the government approved a 1 billion-shekel plan for the development of the region. 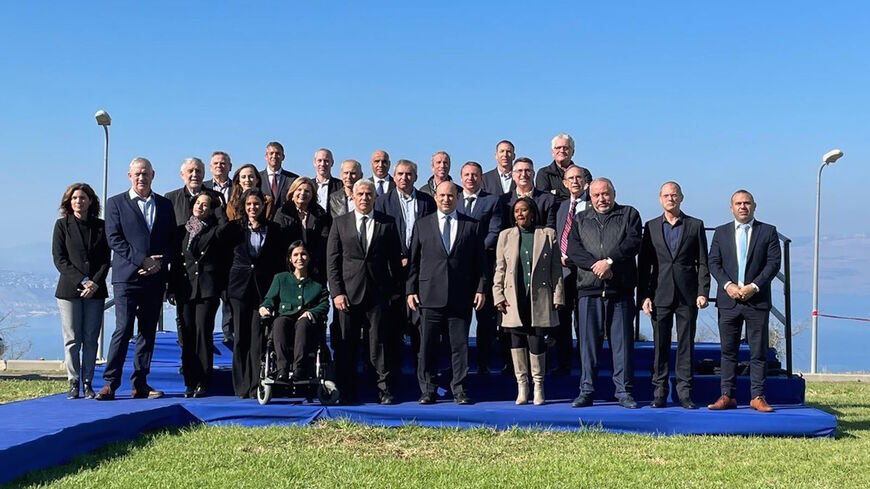 Israel’s Cabinet approved Dec. 26 a 1 billion-shekel ($317 million) plan for encouraging demographic and economic growth in the Golan Heights. Aiming at doubling the Israeli population there up to 100,000 residents, the government plans to approve the construction of 3,300 new housing units in the already existing town of Katzrin, the construction of some 4,000 units throughout the Golan Regional Council and the construction of 4,000 new housing units in two new villages to be soon established in the Golan Heights — Asif and Matar. A special planning committee will be set up, to fast-forward the production of a national master development plan and for eliminating bureaucratic red tape for issuing construction permits.

The decision, announced already in principle last October, was formally taken at the Dec. 26 weekly Cabinet meeting, which took place not in Jerusalem, as usual, but at Kibbutz Mevo Hama in the Golan Heights.

Posting on social media networks after the meeting, Bennett noted, "You, Israelis who are looking for a place to build your home — the Golan Heights are waiting for you; come to the Golan."

Referring to possible apprehensions about the distance between the Golan Heights to the center of the country, Bennett wrote, "In the last two years, many have discovered that it is possible to work from home and not have to live in the center. In this sense, the Golan Heights can be a great option for anyone who prefers clean air, space and quality of life."

In a sign of protest, Regional Cooperation Minister Issawi Frej of the left-wing Meretz party did not join the meeting. Other Meretz ministers did participate at the meeting, however. Israel passed in 1981 a law for the annexation of the Golan Heights region, a decision considered contradicting international law by most of the international community.

Ahmad Tibi, senior member of the opposition Arab Joint List, posted after the meeting, “It doesn’t matter how many Cabinet meetings are held on the Golan, it is occupied Syrian territory. All parts of the coalition are responsible for the decisions made during this Cabinet meeting, as well as for the deepening of the settlements and the violence of settlers.”