At a conference on developing the Golan Heights, Prime Minister Naftali Bennett said he plans to greatly increase the number of Israeli residents of the contested region. 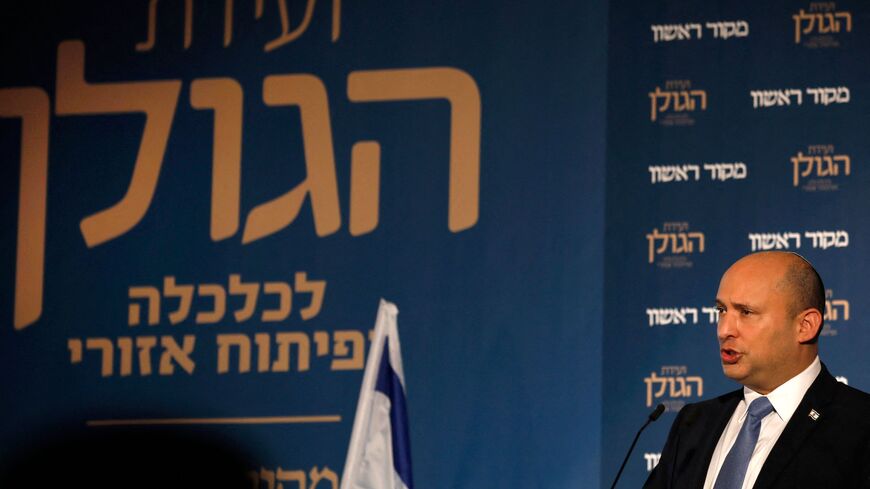 Israel Prime Minister Naftali Bennett speaks during a conference on economic and regional development in the Israel-annexed Golan Heights on Oct. 11, 2021. - JALAA MAREY/AFP via Getty Images

Prime Minister Naftali Bennett intends to dramatically increase the number of Israelis living on the Golan Heights. Speaking at the Makor Rishon Golan Conference in the village of Hispin Oct. 11, Bennett said that in six weeks, his government will present a plan to greatly increase the Golan Heights' Israeli population. The plan includes the construction of two new towns as well as expansion of existing communities and investment in local infrastructure. Several ministers on the right and center including Justice Minister Gideon Saar of New Hope, Interior Minister Ayelet Shaked of Yamina and Energy Minister Karin Elharar of Yesh Atid participated in the conference on the economic development of the region.

President Isaac Herzog opened the conference. In his opening remarks, he said that while Israelis tend to pay attention to the region in times of security crisis, the state must address its needs in normal times by developing the full potential of the Golan Heights.

Bennett said, “The development of the Golan is a national interest. It is not enough to say, ‘The people are with the Golan;’ the government also has to support the Golan.” He explained the goal for the first stage is to double the population there, stating, “In another six weeks, we will hold a government meeting in the area, during which we will approve a national program for the Golan Heights, with its goal being to go from 26,000 residents to 50,000, and then from 50,000 to 100,000; to establish two new towns in the Golan Heights, to create new jobs and to significantly invest in infrastructure.”

The prime minister clarified that Israel has no intention of withdrawing from the region no matter what political or security developments unfold in neighboring Syria. “Our position on the Golan Heights has no connection to the situation in Syria. It is true that the atrocities taking place there for a decade convinced many around the world that maybe it is better for this beautiful and strategic piece of land to be in Israeli hands, that it is preferable for it to be green and flourishing than another theater of killing and bombing. Even in a scenario in which, as can happen, the world changes its position toward Syria, or toward Assad, this would have no connection to the Golan Heights. The Golan Heights is in Israel, period,” he noted.

Bennett also referred to US recognition under the Trump administration of Israel’s sovereignty over the Golan, two decades after Israel’s 1981 annexation of the region, suggesting the Biden administration follows the same policy. “Exactly 40 years ago, the government of Israel led by Menachem Begin made an incredibly brave and important decision: to apply Israeli law to the Golan Heights. Almost three years ago, we were informed of another significant development: The decision of the previous American administration to recognize the Golan Heights as part of Israel — a perception that has been adopted by the current administration,” he said.

Bennett was referring to the March 2019 announcement by then-President Donald Trump recognizing Israeli sovereignty over the Golan Heights. In token of appreciation for the move, then-Prime Minister Benjamin Netanyahu decided to dedicate a new village in the region to the president, naming it Trump Heights.