Trying to appeal to his right-wing electoral base, Prime Minister Naftali Bennett advances plans for increased Jewish settlement in the Golan Heights. 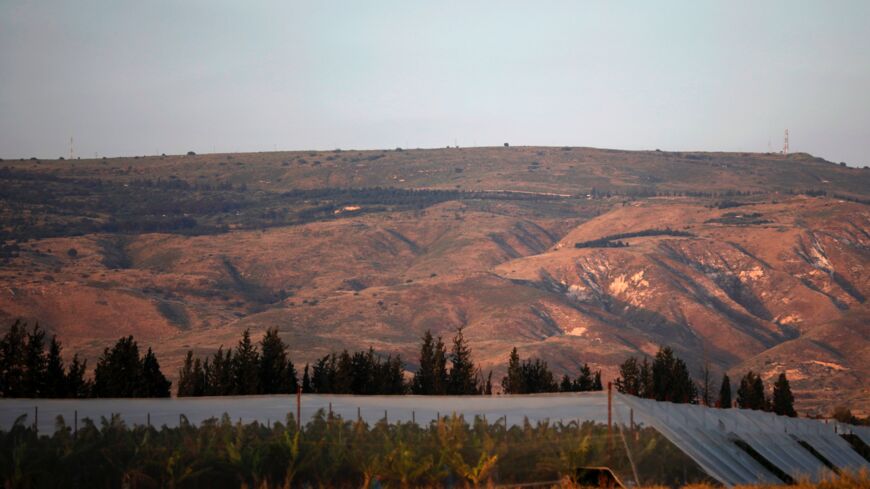 A picture taken on April 23, 2019, shows a general view of the Israeli-annexed Golan Heights, which Israel seized from Syria in the 1967 Six-Day War. - JALAA MAREY/AFP via Getty Images

Some two months ago, Prime Minister Naftali Bennett took part in a conference devoted to the development of the Golan Heights and organized by Makor Rishon, a newspaper identified with the ideological right and the settlement movement. The widely covered event was held in Haspin (also known as Hispin), a largely religious community in the southern Golan, in the presence of several other members of Bennett’s “government of change.”

“The Golan Heights is a strategic goal. Doubling the communities in it is a goal of the government of Israel,” Bennett declared to the sound of applause. Bennett said he would start out with a realistic goal of establishing two new communities, bettering employment opportunities and increasing infrastructure investment on the Golan. “The government is providing the required resources for the implementation of this concept and we are now working toward it,” he told the crowd. “This is the commitment of the government I lead, and we will abide by it. When the government sees out its term, I want us to look back and say, ‘Done.’”

Very little seemed to have occurred following this rousing Oct. 11 statement until last week when Israeli media reports suggested that in this case, Bennett was determined to quickly put the government’s money where his mouth is. After all, his term ends in 18 months.

According to a Haaretz report, the Prime Minister’s Office is advancing the formation of a special planning committee to be granted broad authority in order to accelerate development and construction plans on the Golan. The establishment of the committee will be part of a proposal to be submitted soon for government approval. As Bennett promised, the proposal to be soon submitted includes two new localities and foresees a Jewish population growth of 50% by 2025 and a doubling by the end of the decade — from the current level of some 27,000 (not including the Druze communities). Achieving the goal will require extensive housing construction along with providing job opportunities and developing employment initiatives such as laboratories and agriculture-related services.

The idea of a special planning committee evidently stems from Bennett’s desire for speedy progress, and therefore, in a departure from regular zoning panels, this one will not include public representatives.

The proposed move is already prompting criticism on the part of environmental protection organizations, which argue that bypassing the zoning and planning system in order to establish new communities unnecessarily endangers the preservation of open spaces. However, this is only one part of Bennett’s planned move, which is likely to prompt protests and possible court petitions.

The ambitious plans reflect the prime minister’s urgent political needs given his failure to mobilize public support since taking office some six months ago and losing a significant part of his voting base. His weakness has been increasing commensurate with his failure to provide the ideological right with any of the promised goods. In other words, despite his previous declarations that the right-wing members of the mixed government would be dominant, he has already turned his back on some of his major promises, first and foremost on the advancement of construction in West Bank settlements. Two weeks ago, under heavy US pressure, Bennett was forced to inform the White House that he would not advance construction plans in east Jerusalem, drawing harsh criticism from his right-wing electoral base.

Bennett’s performance in this regard makes the flagship Golan plan a strategic imperative.

Israel took control of the Golan, as it did of the West Bank, in the 1967 Six-Day War. The rocky plateau is still considered by many in the international community as conquered territory. Although it annexed the territory 40 years ago, Israel also conducted negotiations on evacuating the area in return for peace with Syria — both under Prime Minister Yitzhak Rabin in the 1990s and under Prime Minister Ehud Olmert some 15 years ago. However, unlike the West Bank, the Golan enjoys broad consensus with most Israelis opposing its return to Syria, especially after the vicious civil war of the past decade there.

Bennett’s predecessor, Benjamin Netanyahu, declared in April 2016 that the Golan would remain under Israeli sovereignty for eternity, adding that after 50 years it was high time for the international community to recognize this fact. The Syrian government responded at the time with harsh condemnation, calling the statement a provocative measure requiring a response by the international community. In this sense, Bennett is adopting the same line as Netanyahu, without incurring anger on the part of the center-left parties in his coalition.

What's more, some of the communities on the Golan are kibbutzim, identified with center-left political parties, presenting Bennett with a win-win situation — he is both advancing communities/settlements in an internationally contested area while ensuring the support and even encouragement of his center-left partners. Going full steam ahead with the implementation of his declared goals would allow Bennett to present the public with tangible progress, which he badly needs given the public perception of him as being all talk without a single concrete achievement.

Bennett’s Golan conference speech was clearly designed to appeal to the right wing. Thus, for example, he mentioned the historic 1981 decision by then-Prime Minister Menachem Begin, the revered Likud and right-wing leader, extending Israeli law to the Golan Heights. He also noted that almost three years ago, the Trump administration decided to recognize Israeli sovereignty over the Golan, which the Biden administration has not contested. “That was the gift President Trump gave Israel and his friend Benjamin Netanyahu that generated anger among the international community,” Bennett added, alluding to another admired right-wing leader.

Bennett also highlighted the Golan’s significance in terms of Israeli security, especially given the continuing lack of stability in Syria. Israel, he said, is closely following developments in Syria and its affiliation with Iran, which is “sending armies to surround Israel and striving to establish an additional offshoot on the Golan Heights border. We will act wherever and whenever necessary, proactively taking the initiative to remove the Iranian presence in Syria.” Iran, Bennett added, has no business being in Syria. The Golan Heights is located about 1,000 kilometers (600 miles) to Iran’s west, “and their adventurism along our northern border must end, not only ensuring the well-being of the Golan Heights residents but of all our citizens.” Such statements are also aimed at bolstering Bennett’s image as a hawk on security issues, an aspect of his performance in which he is polling very poorly.