Trump paves way for Israel to expand settlements in Golan

Shortly after US President Donald Trump decided to recognize Israeli sovereignty over the occupied Golan Heights, Israel announced a plan to build 30,000 new housing units for settlers in the area. 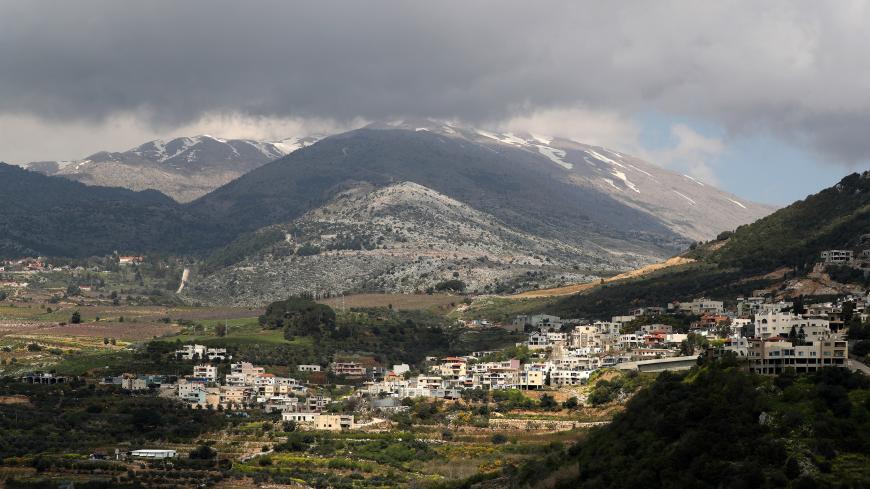 The village of Ein Qiniya is seen in the Israeli-occupied Golan Heights, March 26, 2019. - REUTERS/Ammar Awad

RAMALLAH, West Bank — Israel's Ministry of Housing has confirmed government plans to develop the Golan Heights to accommodate 250,000 Israeli settlers there by 2048, when the country marks its 100th anniversary. The plan, prepared by the ministry in cooperation with the Golan Regional Council and the Council of Katzrin settlement, was revealed one week after US President Donald Trump announced March 25 that the United States would recognize Israel’s sovereignty over the Golan Heights.

The plan is to build 30,000 new housing units in Katzrin, build two new settlements, create 45,000 jobs, develop transportation networks, including railways and airports, and clear land mines from 80,000 dunums (almost 20,000 acres). No further details were available regarding when the plan will be implemented and whom it might employ.

“Revealing a long-term plan to Judaize the Golan would not have been possible without the US decision,” Antoine Shalhat, director of the Palestinian Forum for Israeli Studies (MADAR), an independent research center in Ramallah, told Al-Monitor. Successive US administrations had always considered the Golan Heights occupied territory.

In December 1981, the Israeli Knesset passed a law to annex the Golan Heights and impose Israeli jurisdiction over it. However, the UN Security Council passed Resolution 497, which considered the Israeli law null and void and called for canceling it.

“Launching this settlement plan in the Golan Heights is proof of the US decision’s power in Israel. It allows it to set in motion settlement, tourism, economic and demographic projects,” Shalhat said, adding, “The plan was already thought up and immediately introduced as soon as Trump announced his decision.”

Israel seized the Golan Heights from Syria in 1967 and has refused to give it up since. The Israeli government held a Cabinet session there in April 2016, during which Prime Minister Benjamin Netanyahu pledged to keep the Golan Heights “forever” and called on the world to recognize Israel's sovereignty there.

Israel had appointed members and heads of local councils in the Golan until Interior Minister Aryeh Deri decided in October to hold elections for local authorities in the four villages there: Majdal Shams, Baqatha, Masada and Ein Qiniya. The mostly Druze population, however, rejected the elections and Druze candidates in Baqatha and Masada withdrew, while voter turnout in Majdal Shams and Ein Qiniya was low.

Yet Israel still completely controls the Golan villages and their residents.

Shalhat said the reason for the difference was that "during Israeli-Syrian negotiations, there has been an unofficial Israeli approval for returning the Golan Heights to Syria in exchange for normalization and signing a peace treaty.” He added, “This position was expressed by former Israeli Prime Minister Yitzhak Rabin during the negotiations between 1993 and 1996." However, with Trump's decision, such an arrangement is no longer an option.

Meanwhile, Trump's decision was met with popular condemnation and protest in the Golan Heights. On April 2, 300 Syrian Druze demonstrated against the decision and against a project approved by the Israeli government in 2014 to build 31 wind turbines, arguing that the Golan Heights would remain Syrian territory, the Yedioth Ahronoth daily newspaper reported.

“Trump's decision is complementary to his decision to recognize Jerusalem as the capital of Israel [and proves] the lack of respect for international law that considers the Golan Heights occupied land,” political activist Salman Fakhreddine, who lives in Majdal Shams, told Al-Monitor.

“We have been living under occupation for 50 years now, and Trump's decision will not change anything. In the end, this land is occupied Syrian territory and its sovereignty goes to the Syrian state, which is obliged to liberate it,” he said.

“We, as residents, are doing our duty toward our land, which is limited to popular peaceful resistance. We insist on rejecting the occupation and not recognizing it,” he said.

“Settlement activity in the Golan Heights has not stopped since 1967, and the [April 1] announcement of the settlement plan comes under [the rubric of] Israeli election propaganda,” Fakhreddine said. “Settlement activity in the Golan Heights in recent years has not been as urgent to Israel as it is in the West Bank, [which is] close to the center of the state. But it will now focus on its expansion here, and we cannot [do anything] but hold on, because the land we stand on is all we have left.”

Majd Abu Saleh, a lawyer who lives in Majdal Shams, told Al-Monitor, “Trump's decision will not change our affiliation with Syria and our refusal to be part of Israel. We have expressed this through popular demonstrations in the villages of the Golan Heights. Under occupation, we will never accept this decision.”

He said, “Israel has been trying to Judaize the Golan Heights since the first day it set foot here and established its settlements. Trump's decision will only encourage it to further Judaize the area.”

“We are familiar with the policy of Judaization and imposing a fait accompli that Israel has been pursuing for years to force its sovereignty and control over the Golan Heights. But we, as civilians under occupation, will always stand against it,” Abu Saleh said. “The biggest effort will have to be on the Syrian state’s part as well as the Arab world to restore the Golan Heights.”

Residents can only take to the streets to protest against Trump's recognition of Israeli sovereignty over the Golan Heights. In light of the ongoing war in Syria, the US decision has given Israel the green light to carry out its settlement projects in the Golan Heights as it pleases.