Some Druze residents of the Golan Heights protested US recognition of Israeli sovereignty over the territory, but others welcomed it. 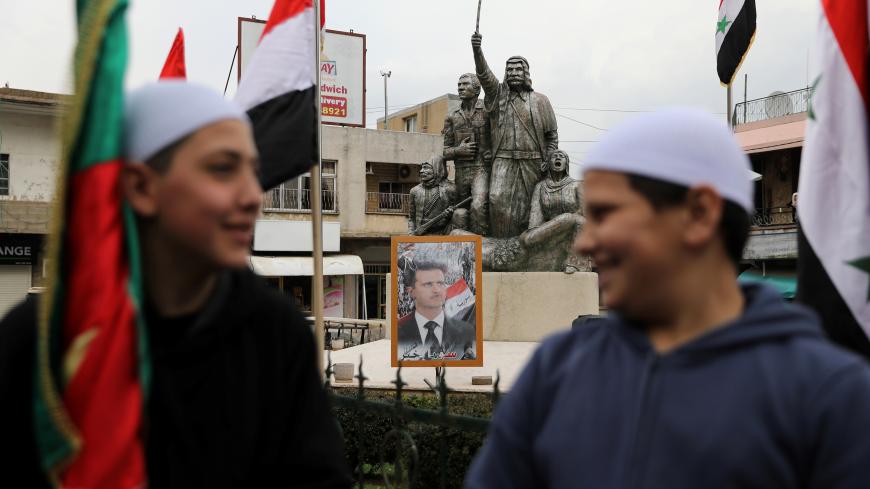 Druze people take part in a protest over President Donald Trump's support for Israeli sovereignty over the Golan Heights, in Majdal Shams near the ceasefire line between Israel and Syria in the Israeli occupied Golan Heights, March 23, 2019. - REUTERS/Ammar Awad

Israel has occupied 1,250 square kilometers of the Golan Heights for 52 years, ever since capturing it in 1967 from the Syrians, who used its strategic position to attack Israeli villages in the Galilee and Jordan Valley for nearly 20 years. Of the 128,000 Syrian citizens who once lived there, only 6,000, most of them Druze, decided to remain there. The rest abandoned their homes and fled to Syria.

After 14 years of Israeli military rule, the Knesset passed a law annexing the Golan Heights and offering Israeli citizenship to residents of the territory. In response, the UN Security Council adopted Resolution 497, declaring the annexation “null and void” according to international law.

Since that day in 1981, few residents have requested an Israeli identification card. According to Interior Ministry estimates, no more than 10% have chosen to become naturalized Israeli citizens. According to data obtained by Al-Monitor, there had been a sharp rise in the number of naturalization requests in recent years. Whereas in 2014 only 39 Druze requested citizenship, in 2016 the number increased to 188. It then decreased to 85 in 2018, but requests continue to be made. As of mid-March, 34 Druze had submitted applications to naturalize this year.

Wahel Tarabiah, an art teacher from Majdal Shams and an activist with the Al-Marsad Arab Human Rights Center, sees himself as a Syrian citizen living on Syrian land. He says he will not seek an Israeli identification card.

“In Israel, they call us the ‘Druze villages,’ but culturally we are Arab, and our political affiliation is Syrian,” Tarabiah told Al-Monitor. “We are Druze as a religious identity. We are not the Druze villages! We are the Arab Syrian villages! The Israeli regime calls us this in order to bring religious identity to the forefront and to erase the cultural roots of our identity.”

Tarabiah hopes for the return of the Golan to Syria. “My position against the Israeli occupation is unequivocal,” he explained. “Israeli fascism and apartheid are not essentially different from President Assad’s dictatorship. The only difference is that the Israeli regime is smarter at marketing itself to the world.”

Tarabiah does not, however, believe the Golan will soon change hands. “The return of the Golan to Syrian sovereignty is contingent on the existence of a democratic regime in Syria,” he asserted.

“Following the Arab Spring in Syria, 90% of the Druze prefer Israeli sovereignty. There’s no question here at all,” he told Al-Monitor. “Three hundred people went to protest out of 24,000 Druze. That’s nothing. Supporters of Syrian nationalism are few.”

As for why the majority of Druze aren’t rushing to identify with Israel, Abu Awad asserted, “Many have family across the fence. They fear that if they support Israel, their families in Syria will be harassed.”

Abu Awad claims that the Druze don’t feel safe siding with Israel. “Israelis have a history of returning territory,” he said. “Israel was in Lebanon for 25 years and then abandoned its allies. The same story happened with Yamit in Sinai [which was returned to Egypt]. For years Israeli governments have held overt negotiations over returning the West Bank and covert negotiations over returning the Golan Heights. People [here] think that Israel could leave the territory, and whoever supported the Israelis would pay a heavy price.”

Despite the minority seeking Israeli citizenship, in recent years a desire to integrate into Israel could be discerned in the rate of people participating in local elections.

Until 2018, as an act of denying Israeli authority, the four Druze villages on the Golan — Majdal Shamas, Masaada, Ein Qinia, and Buqa’ata — had refrained from holding local elections and were content to have affairs managed by a committee appointed by the Israeli interior minister. On October 30, 2018, following protests, threats and general uproar, Ein Qinia, Majdal Shams, and Buqa’ata held elections for the first time in 52 years. Although few participated, that the elections took place should not be taken for granted. Masaada continues to be managed by an Interior appointee.

“The discussion among the Druze is divided between the public and the personal,” Eli Zigdon, chairman of the Masaada committee, told Al-Monitor. “In public they have to support Assad, but in private conversation you hear the complete opposite. They support remaining under Israeli rule.”

Zigdon is convinced that in a few years, opposition to naturalization will decrease substantially. “Israel has controlled the Golan Heights for more years than Syria controlled it,” he said. “Reality is more powerful than anything.”

Tarabiah refuses to accept this as a possibility. “Israeli occupation of the Golan Heights contravenes international law and the resolution of the Security Council, and we will never recognize it,” he said. “Trump’s declaration is a disaster. It proves that occupation pays off. It hurts all international values that were decided following the First and Second World Wars. It takes us all back to the law of the jungle.”

As Tarabiah sees it, the one good thing about Trump’s declaration is its returning the issue of Syrian refugees to the international headlines.

“In 1967, Israel expelled [residents of] 340 villages and two cities from the Golan Heights,” Tarabiah remarked. “Today their descendants number nearly half a million people, and I support their return to the Golan. This right is no less than the right of the return of the Palestinians, but no one talks about the Golan. Now, thanks to Trump, we can bring up this issue. In this respect, I thank him.”

Abu Awad sees Trump’s decision differently. “The Druze are happy with Trump’s move, because it gives us another indication that Israel is not leaving here,” he said. “But we are a suspicious people. It will take many more years until people will believe that the romance with Israel is permanent.”