Golan residents unhappy, yet unsurprised by US decision

Golan Heights residents were dismayed but not altogether shocked by the US president's sudden decision to recognize Israel's annexation of their homeland. 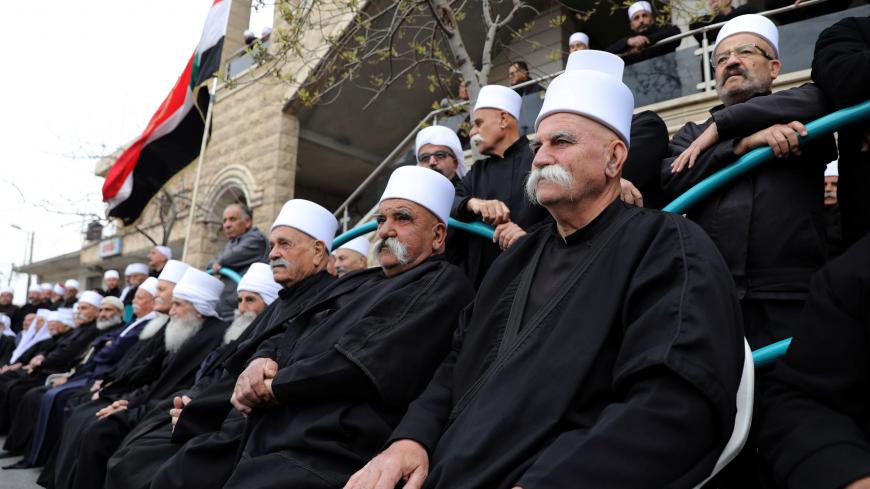 Druze people take part in a rally over US President Donald Trump's support for Israeli sovereignty over the Golan Heights near the cease-fire line between Israel and Syria in the Israeli-occupied Golan Heights, March 23, 2019. - REUTERS/Ammar Awad

When the Israeli prime minister met with the US president earlier this week, each had a gift for the other. Benjamin Netanyahu, the Israeli prime minister fighting for his political life amid charges of corruption and bribery, gave Donald Trump wine made by illegal Jewish settlers in the Golan Heights. Many people around the world and even in Israel itself boycott Golan wine because it is produced on stolen lands.

In return, Trump had prepared a much nicer gift. The US president, reportedly without the knowledge of some of his own senior staff, decided to unilaterally recognize Israel’s 1981 annexation of the Golan Heights — a decision that the entire world community has rejected and issued United Nations Security Council resolutions to that effect.

The US decision came one week after the US State Department reversed five decades of US policy by changing the term it uses to refer to the status of the Golan Heights from “occupied territory” to “Israeli-controlled territory.”

Demonstrations spread across Syria March 26 opposing the US recognition of Israeli sovereignty over the Golan in a rare show of unity in the war-torn country.

A more interesting reaction, however, took place in the occupied Golan Heights itself, where demonstrations were staged March 23 on both sides of the fence separating the areas under Israeli occupation and the rest of Syrian territory. Residents of the Golan Heights town of Majdal Shams protested the US decision along with their counterparts on the Quneitra side.

But demonstrations aside, the US decision was no great surprise for the 20,000 Syrian residents that remain in five villages in the occupied Golan.

Nehad Rada, an actor who runs a nongovernmental theater organization called Golan Heights Artistic Production, told Al-Monitor that nothing will change as a result of the US decision. “In general, our opinions are the same. This land is Syrian and this will not change.”

Rada mocked the US president for “giving away land that is not his own simply on his own whims,” saying, “If someone is interested in one of the 50 states of America, please let me know and we will hold a rally to call for that person getting, say, California or Florida.”

Thaer Abu Saleh, one of the leading local community leaders among Syrian residents of the occupied Golan Heights, told a Haifa-based website that Trump’s decision was no surprise to those following events in the region.

Since 2011, Israel has been trying to enforce a new reality in the region using the internal war in Syria. “In 2016, Netanyahu held a Cabinet meeting on the Golan Heights and called on the world to recognize Israeli sovereignty over the area,” Abu Saleh told the Arab48 news site. He noted that Israel is also promoting settlement activities and goading the young generation to accept Israeli citizenship. “These attempts have failed. Less than 6.5% of the residents of the Golan Heights have applied for and carry Israeli citizenship.”

Israeli law considers the Golan Heights, much like East Jerusalem, part of the state, but the people living in it are considered permanent residents, not citizens. They are allowed to apply for citizenship, but the state doesn’t guarantee it will be granted. In East Jerusalem, a city of 330,000, only 6,000 have been granted citizenship — less than 2% of the population.

Samih Ayoub, a Syrian activist in the Golan Heights, also expressed little surprise. “This is nothing more than an electoral gift to Netanyahu that will fail to materialize as a result of the steadfastness of the Syrian people and rejection by the international community,” Ayoub told Palestinian outlet Al-Hadath March 26. He added that the Israelis will leave the Golan as they left Lebanon and the Sinai Peninsula. “The Syrians will stay on the land, defending its national identity, rejecting collective punishment and attempts at normalization.”

Ayoub, along with the majority of the Golan residents, belongs to the Druze community — though they disagree politically with the Israeli Druze, who are conscripted and serve in Israel's military. He explained that his local community will use social and religious tools like shunning to punish anyone who participates in Israeli schemes on the Golan Heights.

The Golan residents are farmers with strong survival skills. As a community, they have used nonviolent methods to ensure compliance with issues of national consensus. They see the US decision as another blip in their long struggle to preserve their way of life and their patriotic connection to their Syrian motherland, even through difficult times.