Prime Minister Benjamin Netanyahu is dealing with blowback from settlers over both the agreement reached with the United Arab Emirates and the suspension of the annexation plan. 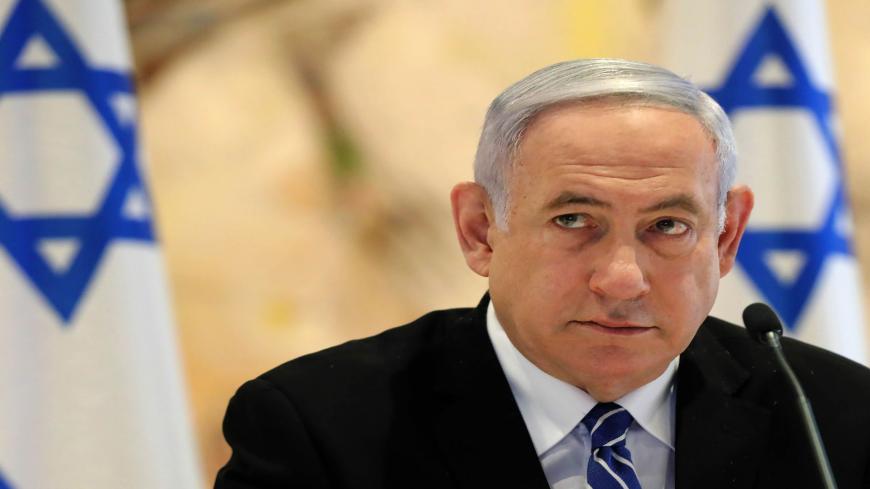 It was hard to ignore the goodwill gesture made by Prime Minister Benjamin Netanyahu to the right-wing Channel 20, at the opening of the press conference that he convened Aug. 23. Netanyahu had summoned the political correspondents to announce his acceptance of a compromise with the Blue and White party. By accepting to delay the vote on the state budget by 120 days, Netanyahu avoided for the Knesset to be dispersed and for new elections to be called.

After making his announcement, the prime minister was ready to take questions. But with everyone raising their hands, including all the leading channels on prime time live TV, Netanyahu kept looking for the Channel 20 correspondent, to grant him the first question. Still, what looked like paying homage to the style of Netanyahu’s friend — US President Donald Trump — went far beyond that.

Netanyahu knew that he would be asked about the agreement with the United Arab Emirates (UAE) and the steep price he paid — in the eyes of the right-wing camp — when he waived the annexation of West Bank settlements. Indeed, giving up on annexation had raised the ire of large swaths of the right. Therefore, the prime minister wanted to demonstrate his loyalty to his ideological base, in full view of the cameras.

Netanyahu knew that some of the settler leaders — mainly heads of the Yesha Council, the settlement umbrella organization — were very angry and disappointed with him. But he also knew that others in the settler leadership were more understanding of his varied considerations as a statesman and, thus, will remain faithful to him.

Channel 20 had backed the prime minister after the normalization agreement with the Emirates was revealed. Journalists considered close to him came to Netanyahu’s rescue on social media. They came down against Yesha Council Chairman David Elhayani when the latter claimed that Netanyahu had cheated the settlers.

Elhayani had been claiming for some time already that Trump’s plan was a disaster anyhow since it called for the establishment of a Palestinian state. In fact, in an interview with Haaretz last June, Elhayani claimed that Trump is not a friend of Israel. Netanyahu had quickly invalidated Elhayani’s statement, but Elhayani did not retract his words.

The grassroot struggle against Netanyahu has gone up another notch. With pro-settler Yamina Chairman Naftali Bennett gathering strength in the polls, the self-confidence of Netanyahu’s opponents in the settlements is also growing. In fact, Bennett is preparing to run for prime minister in the next elections, as a right-wing "alternative" to Netanyahu. This reality changes the rules of the game regarding Netanyahu and the latter’s future; the prime minister is the first to understand all the implications involved.

For several months, Netanyahu has observed how Bennett — who had served in the past as Yesha Council chairman — is now closing ranks against him with the settlers. Thus, for example, immediately after the Emirate agreement was revealed, Bennett ran an anti-Netanyahu campaign and tweeted, “It’s unfortunate that Netanyahu has squandered a once-in-a-hundred-year chance to extend Israeli sovereignty to the Jordan Valley, Ma’ale Adumim, Beit El and the rest of the settlements.”

The right-wing offensive continued, with Elhayani saying, "He [Netanyahu] misled us for a long time.” Samaria Regional Council head Yossi Dagan, one of the Likud’s strongmen, was no less scathing. He said, “Netanyahu is selling our sovereignty in exchange for a piece of paper from a country that has never threatened Israel. This is the scam of the century.”

This week, the Yesha Council shifted into high gear in the battle against Netanyahu; now they attack him for freezing building permits in the West Bank settlements in the last half year. And the Construction Planning Committee has not convened in half a year, effectively freezing new construction there. In fact, the Construction Planning Committee was supposed to convene this week but the meeting was mysteriously canceled. Thus, many accusing fingers are pointing to the prime minister.

In a press briefing, the Yesha Council said that the current situation is a de facto planning freeze in all parts of the West Bank. When we add to that the annulment of imposing sovereignty on West Bank settlements and the Jordan Valley, the picture from the settlers’ point of view looks bleaker than ever.

In the face of these militant voices, Netanyahu seeks to woo the more pragmatic elements within the settler camp — those council heads and opinion leaders who understand that the prime minister was forced to freeze the annexation, until Trump will give him the green light. These pragmatics claim that Elhayani and his group are the short-sided ones who are harming the right-wing camp and Netanyahu, and this could lead to Netanyahu’s downfall (as had happened in the past).

Efrat Council Head Oded Revivi is one of the settler leaders supporting Netanyahu. He claims that while the annexation plan is now tabled, the price was fair. The pragmatics remind others of Netanyahu’s firm stance vis-a-vis President Barack Obama for eight long years, when the prime minister halted Obama’s aggressive attempts to dry up the settlements and impose a two-state solution.

Other pragmatic voices blame the anti-Netanyahu settlers for sabotaging from the outset annexation efforts. These other voices keep reminding that the more extreme settler leaders campaigned from the very beginning against Trump’s plan; they even campaigned against it within the Christian Evangelist community — Trump’s hard-core supporter. Now the same extreme settler leaders are angry for the suspension of Trump’s plan. The pragmatic voices are also reminding the historic moves instigated by Trump, ever since he took office, such as the transfer of the US Embassy to Jerusalem and the recognition of the Golan Heights.

Of course, this internal debate within the settlement leadership serves Netanyahu well, as he is a master of the "divide and conquer" approach. In fact, he was the one to generate this reality on the ground. In Netanyahu’s first term of office as prime minister (1996-99), he negotiated with PLO leader Yasser Arafat in accordance with Israel’s commitments in the Oslo Accord, and all the settler factions opposed him. But that's not the case now — a significant portion of them continue to credit and rely on him. This is a good starting point for the next election campaign, which is expected to take place in March 2021.

Meanwhile, Netanyahu himself strongly argues that the annexation plan has not been taken off the table, despite the agreement with the UAE. This will be his propaganda line in his next campaign. Still, this won’t be easy for him, mainly if Trump remains in office. He will have no one in Washington to blame. On the other hand, a Trump victory will help him greatly among the right-wingers, most of whom understand and appreciate that such a pro-settlement US president is a rarity indeed.