Netanyahu gets one more — perhaps last — gift from Trump

The cancellation of the US ban against supporting research in West Bank settlement institutions would surely benefit Prime Minister Benjamin Netanyahu in his efforts to appease the settlers. 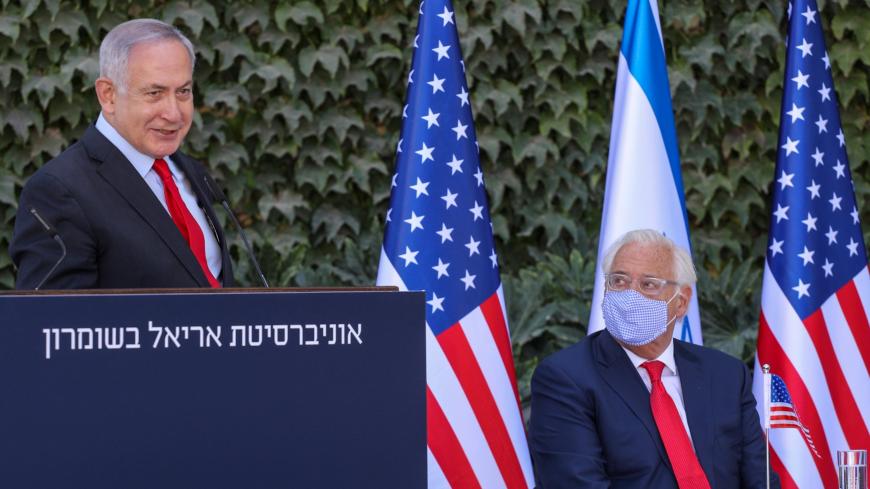 US ambassador to Israel David Friedman (R) listens to a speech by Israeli Prime Minister Benjamin Netanyahu during a ceremony for the signing of an extension of the Israeli-US scientific cooperation agreement at Ariel University in the occupied West Bank, Oct. 28, 2020. - EMIL SALMAN/POOL/AFP via Getty Images

On Oct. 28, Prime Minister Benjamin Netanyahu and US Ambassador David Friedman stood beside each other in the open air of Ariel University’s events square to write yet another chapter in the emerging story of de facto American recognition of Israeli sovereignty over the West Bank.

The official reason for this celebration was the signing of an official agreement lifting bans that prevented scientific collaboration between Israel and the United States in the West Bank and Golan Heights. The ban had prevented Ariel from receiving US financial aid because of its geographical location. But behind the need to correct this situation in the name of “science” was a resounding political statement that took place just six days before the US presidential election.

For the first time, funding for research and development will be made available to universities and other institutes of higher learning in Judea and Samaria, effectively lifting the US academic boycott of the region.

The terms of this decision were worked out behind the scenes over the last few years. Given the difficulties along the way, it was only finalized recently, in the shadow of the impending US election. Should President Donald Trump lose, the settlers would lose the best friend they ever had in the White House. Sources familiar with the move say that it was pushed forward by billionaire Sheldon Adelson, one of Ariel University’s biggest donors and a close friend of both President Donald Trump and Netanyahu. Apparently, he pressured the US administration to sign the agreement before the presidential election.

For Netanyahu, this was yet one more expensive gift — perhaps the last — from Trump, who had already fulfilled so many of the prime minister's dreams in such a short time span. Netanyahu was the “winner” when he showed up in Ariel, particularly given the anger he faced from many settler leaders because of his decision to forgo annexation in order to sign the Abraham Accords, which normalized Israeli relations with the United Arab Emirates and Bahrain.

At the Ariel ceremony, Netanyahu proved to the settlers yet again that there has never been a prime minister like him who showered so many gifts on the right in such a short period. He was able to obtain US recognition of Jerusalem as the capital of Israel, which included the relocation of the US embassy there, to win recognition of Israel’s annexation of the Golan Heights and to maintain a warm and friendly attitude toward the settlers.

What made this especially meaningful was the fact that all of this came right after eight very difficult years under the Obama administration. Netanyahu arrived in Ariel to remind the settlers what might happen if a Democratic president wins the White House. While this was never said explicitly, it could be felt in the air.

As if all this was not enough, on the same day, US Secretary of State Mike Pompeo announced that US citizens born in Jerusalem can list Israel as their place of birth in their passports. Up until now, and for many years, Americans born in Jerusalem had only the word ‘’Jerusalem’’ written as place of birth in their passport — not ‘’Jerusalem, Israel.’’ While the newly introduced change has little practical meaning, it was a powerful statement for Trump’s evangelical base and Netanyahu’s ideological one just days before the US election. The Obama administration could have taken steps to change this long-standing policy, but preferred to keep it as is.

At the Ariel University ceremony, Netanyahu said, “Today, we are applying the Israel-US science agreement to Judea and Samaria [the West Bank] and the Golan Heights. This is a great change. This is a victory against all of the organizations and countries that boycott Judea and Samaria.”

Friedman is often considered the friendliest ambassador the settlers have ever known. He was undoubtedly the godfather of this event. At the ceremony, he described the efforts that took place behind the scenes to amend the existing situation. He recalled how, in the 1970s, the United States and Israel began to collaborate on scientific and agricultural research and development through ties with three professional organizations. Together, these organizations brought enormous success to Israel and the United States in a variety of different fields.

He went on to say how, just a few years ago, the Trump administration began to look at ways to move things ahead even further. As he put it, “I was disappointed that these agreements devoted to academic and scientific growth were subject to political limitations that did not serve the goals sought to be achieved. These geographic restrictions no longer comport with our foreign policy.”

He went on to say how, about a year ago, he took steps to eliminate the offending clause statement from the agreement. “Plainly, this geographic restriction within these three agreements was an anachronism. We are righting an old wrong, and we are strengthening yet again the unbreakable bond between our two countries.”

For the past two years, one of the people most active behind the scenes in amending this agreement was Ofir Akunis, then the minister of science and technology and now the minister of regional cooperation. In late 2019, he was invited to a working meeting at the White House with the president’s science adviser, during which he pushed the agreement forward. Negotiations over the final agreement lasted two years. It was a long and arduous process where Friedman was a constant presence making sure that the process moved along.

Akunis told Al-Monitor on Oct. 30, “This agreement is the direct consequence of Secretary Pompeo’s declaration that settlements in Judea and Samaria are not in violation of international law. It is, effectively, the practical implementation of American recognition of Israel’s rights to the territory of the Golan Heights, Samaria and Judea. When scientific and investment agreements stopped at the borders of June 4, 1967, it was a political statement. The agreements, which we worked hard to adjust, are a powerful new political statement with major significance for the future.”

Netanyahu should be able to use the event in Ariel as a shield against the ideological hard right and the settlers, many of whom have become so angry at him that they switched their allegiance to Yamina party leader Naftali Bennett. In fact, some of them were so furious that they made a point of boycotting the ceremony in Ariel in protest. The fact that Trump is changing priorities to benefit the settlers up until the very last minute should help Netanyahu electorally, even if Trump is not elected. He will be able to bring it up to the voters on the right who abandoned him to show what he has been able to achieve in just four years. It also would help make the argument that he should be the Israeli leader elected to deal with the US president, regardless of whether the office is held by a Republican or a Democrat.