Israel’s most nationalist government ever pledges to annex the occupied territories, and then approves a historic trade pact with South Korea that boycotts the settlements. 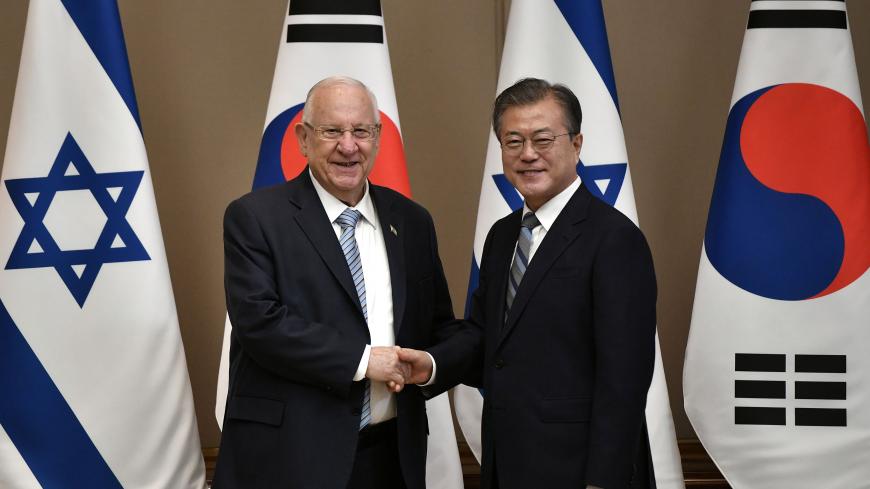 “Historic agreement” was how Israel’s Ministry of Economy and Industry described the free trade agreement just concluded with South Korea, Israel’s first such pact with an Asian state. The photo of the Aug. 21 announcement ceremony shows Economy and Industry Minister Eli Cohen — recently “imported” from the Kulanu party in a trade deal with the ruling Likud — alongside South Korean Minister of Trade Yoo Myung-hee. The ministry said the agreement with the world’s 11th largest economy would increase Israeli exports and encourage investments and growth. Cohen described it as “a celebration for free market adherents,” and his ministry believes the deal will generate similar agreements with other Asian countries, chief among them China (if Big Brother US President Donald Trump gives his blessing).

Prime Minister Benjamin Netanyahu was noticeably absent from the festive event. Why did “Mr. Economy” cancel his participation at the last minute? After all, ties with the burgeoning Asian economy are Netanyahu’s trump card vis-a-vis the European Union (EU) — the same union Netanyahu reviles over its refusal to accept Israel’s occupation of Palestinian territories and its insistence to ignore the Israeli settlement enterprise. Netanyahu has depicted stronger ties with Asian economies as Israel’s "economic Iron Dome" against the threat of EU sanctions. Why, then, did gift-loving Netanyahu absent himself when South Korea handed over presents worth thousands of shekels in discounts to Israeli buyers of the Hyundai and Kia brands clogging the nation’s highways? How can one explain the timing, just weeks ahead of the Sept. 17 elections in which every vote could determine his fate?

The answer to this riddle — or the “devil” in the details, one might say — lies in the small print of the agreement signed by Israel’s most nationalistic government ever, which includes two radical right-wing ministers — Rafi Peretz and Bezalel Smotrich. By keeping silent on the deal with South Korea, these two far-right ministers lent a hand to the division of Jerusalem into east and west — into its predominantly Palestinian eastern sector and its predominantly Jewish west. They lend a hand to the exclusion of the Golan Heights settlement town of Katzrin and of the Ma’ale Adumim settlement town adjacent to Israel’s capital. Had Netanyahu posed for a photo alongside the minister from Seoul, a leftist journalist might have asked him how his pledge to annex parts of the West Bank or his June 2017 declaration that the settlement town of Ariel would always be a part of Israel fit in with the exclusion of these areas from the new free trade agreement. A speech on this “historic” occasion would have added Netanyahu’s name to those of his predecessors Ariel Sharon and Ehud Olmert who signed a free trade agreement with the EU, which required the Jewish state to specifically label products manufactured or grown by Israelis in the territories captured in 1967. That includes East Jerusalem, which, as Netanyahu repeatedly states, has been joined with the west into a “unified whole,” and "Trump Heights," the isolated Golan Heights spot named after the US president.

Surprisingly, leaders of the settlers, as well as their political patrons, kept mum on this exclusion. Chair of the Judea and Samaria Settlement Council Hananel Dorani went so far as to announce that he was “glad to hear that the position of the State of Israel, as expressed in the discussions with South Korea, clarifies explicitly that it rejects any territorial distinctions within Israel’s territory.” Dorani added, “This is an important statement of principle representing the fact that Judea, Samaria, the Jordan Valley and the Golan Heights are an inseparable part of the State of Israel.”

This strange reaction to the agreement that discriminates against the settlements may lie in internal right-wing politics on the eve of the elections. Another possible explanation could lie in the equanimity with which the news was received. Israel has decided on a mechanism — similar to the one it adopted vis-a-vis the free trade deal with the EU — which would compensate exporters from the settlements in the occupied territories. The compensation reflects the difference between the duties paid on their exports and the duties that would have been paid under the beneficial terms of the free trade agreement. This mechanism significantly eases these exporters’ discrimination compared to those exporting goods and services from sovereign Israeli territory.

Yet another explanation can be found in a Canadian court decision handed down in late July in a petition against the marketing of spirits from the wineries in the West Bank settlements of Psagot and Shiloh in Canadian supermarkets. Canada’s federal court ruled that labeling the settlement wines as "Products of Israel" was “false, misleading and deceptive.” In a debate on the issue conducted in 2004 in the Knesset’s Economic Affairs Committee, Danny Bash, the director of an aluminum plant in the settlement of Mishor Adumim, admitted, “We are trying to avoid [paying duties of 7.5%], and if they give us trouble in Hamburg, we get the goods into Europe via Trieste, which costs more in transportation.”

Comments made at the time by Knesset member Gilad Erdan, who would eventually be named the minister in charge of Israel’s fight against the boycott, divestment and sanctions movement, indicated his displeasure with this con job described by Bash. “The State of Israel, led by the Likud, has decided on a process of capitulation and not on a legal process, lest a court determine that these are not Israeli territories,” Erdan said with rare candor, “which courts do in any case, even without our surrender.”

Now a leading Asian state has joined others that translated their stance on the occupied territories into a legally binding document. It appears that Trump’s recognition of Jerusalem as the unified capital of Israel and of the Golan Heights as sovereign Israeli territory did not make much of an impression on his country’s biggest ally on the Asian continent.

The most outspoken criticism of the agreement with South Korea — if not the only one — emerged from the ranks of the opposition Blue and White party. Knesset member Zvi Hauser of the party’s hawkish wing claimed that signing an agreement that runs counter to a presidential executive order that Israel worked so hard to achieve “was absurd, a farce.” His colleague Yoaz Hendel added in derision that the government’s decision “illustrates the true meaning of a strong right.”

The absurdity in this case is that leading Knesset members from the party that presumes to lead the “centrist” bloc of Israeli politics are overtaking the Netanyahu-Smotrich regime on the right.

The farce is that Netanyahu pledges to annex “Judea and Samaria” (the West Bank), and at the same time agrees to exclude the West Bank from the State of Israel. The farce is that Netanyahu mounts a relentless war against boycott of the settlements, and at the same time approves boycotting measures. And on the backdrop of this double farce, Netanyahu prefers canceling his participation at the signing ceremony. He lacks the courage and honesty necessary for publicly facing the reality that he himself has created.