Israeli Prime Minister Benjamin Netanyahu freezes construction in settlement blocs, hoping to keep the diplomatic process underway — not for the sake of reaching an agreement — and reduce international pressure. 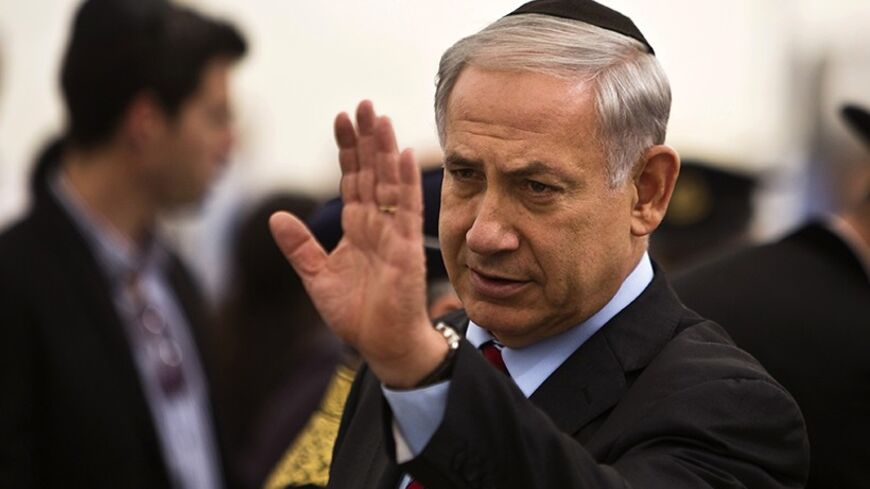 Israel's Prime Minister Benjamin Netanyahu gestures as he arrives for a ceremony marking Memorial Day in Jerusalem, May 4, 2014. - REUTERS/Nir Elias

Heads of local authorities who are Likud Party members are protesting Prime Minister Benjamin Netanyahu's not approving construction plans in Judea-Samaria, despite that negotiations with the Palestinians have reached a dead end.

They claim that they discovered that plans authorized by Defense Minister Moshe Ya’alon were halted by the prime minister’s office under Netanyahu’s direct instruction. Thus, for example, while Ya’alon approved in recent days building plans in the settlement of Oranit near the Green Line, the authorization was frozen by order of Netanyahu.

According to the Likud mayors, the greatest damage wrought in recent years was the construction within the settlement blocs because these are in the US line of fire. Following the blowup in the talks with the Palestinians, the heads of local authorities assumed that Netanyahu would now unfreeze planning and building procedures in Judea-Samaria.

They say that they were disappointed to discover that the prime minister chose to halt most of the plans instead of taking advantage of the window of opportunity to permit construction in the settlement blocs.

Why did Netanyahu do this even though he is certainly aware that such conduct will harm his right-wing electorate and cause him political damage? The answer may lie in what transpired on May 19 at a weekly meeting of the Likud faction.

Likud mayors living beyond the Green Line waited for Netanyahu in the conference room, where they asked him for an explanation regarding the continuation of the construction freeze. Benny Kasriel, mayor of Ma'ale Adumim, held a petition in his hand demanding that Netanyahu immediately approve the construction of the Mevaseret Adumim neighborhood in his city to alleviate the housing shortage. The signatures of numerous Likud ministers and Knesset members graced the petition, including Ministers Yisrael Katz and Gilad Erdan, Coalition Chair Yariv Levin, Deputy Minister Ofir Akunis, Knesset members Gila Gamliel and Miri Regev, as well as most of the heads of Likud’s local branches.

Netanyahu dedicated most of the opening remarks he delivered before the cameras to a detailed description of Israel’s booming foreign relations, including economic cooperation with Japan and China and other countries. The common denominator of these states is the fact that they are not located in Europe.

At first, it was not clear to the audience why Netanyahu was providing them with these details. Only afterward did the connection between his words and the blowup in the talks, and also with the way Netanyahu envisions "the day after" the break in diplomatic negotiations, become clear.

“I come here now after signing an agreement with China’s vice premier, and last week I signed similar agreements with the prime minister of Japan,” emphasized Netanyahu. He said, “I conversed with the Nigerian president who asked me to send Israeli help for the struggle against Islamic terror. Yesterday, I spoke with the president of Serbia, who asked me to send Israeli assistance against the floods that are striking his country. Yesterday, at a government meeting, we also advanced a resolution for cooperation with the five countries that constitute the Pacific Alliance in Latin America.” Netanyahu took a deep breath and continued, “Several days ago, I conversed with Prime Minister Narendra Modi who was elected to lead India, and in this conversation he expressed his strong desire to strengthen relations with the State of Israel. This is the answer to those who want to isolate us, and we also have a rejoinder to those who view the establishment of the Jewish state, Israel, as a catastrophe. The answer is a Basic Law that defines the State of Israel as a Jewish and democratic state.”

When he finished his speech and the media was asked to leave, it was clear what Netanyahu had attempted to do. On the backdrop of the failure of the talks, the international pressure — mostly European, which is returning these days to center stage — and the accusing finger waved by the United States at Israel, Netanyahu actually tried to depict Israel differently. He wanted to describe Israel as a state surrounded by friends that is taking action to open its markets to new countries, a state with a strong economy.

According to a Likud minister, “It was clear to us that Bibi [Netanyahu] wants to show the world that he is not the problem. We can manage even without Europe, and this is the Israeli answer to the European boycott on settlement products.”

Yet, something else bothers the mayor of the West Bank Jewish settlement of Ma'ale Adumim. “Mr. Prime Minister,” said Kasriel to Netanyahu, while noting that about 850 Ma'ale Adumim youths were enlisted this year to the Israel Defense Forces, “it is not conceivable that, when they complete their military service, there will be no houses for them to buy and live in.” According to the mayor, today only about 85 residential units are being built a year in Ma'ale Adumim, as opposed to 1,000 units in years past. “I think that no US or European pressure should have any influence here,” he concluded.

Netanyahu answered that he is familiar with the subject and again mentioned the new markets in the Far East and the isolation.

“In short, he did not have an unequivocal answer, not one way or the other. The conclusion is that Netanyahu is afraid of the Americans,” Kasriel told Al-Monitor. “What I understood from him is that actually, he wants to calm things down vis-a-vis the Europeans and not antagonize [US President Barack] Obama. He is under very heavy pressure from the Americans. It was brought to our attention, from all kinds of Defense Ministry sources, that the prime minister was the one who instructed the defense minister not to advance the construction plans.”

To Al-Monitor's question about what the significance of this is, Kasriel replied, "We will aggravate the struggle and take to the streets. Behind us are ministers, Knesset members and almost all the heads of the Likud branches. We thought that the moment the diplomatic process was halted due to the Palestinians, there was no reason that Netanyahu should not build in the [settlement] blocs."

“Kasriel is correct,” Knesset member Gamliel told Al-Monitor. “What is happening in Ma'ale Adumim is a tragedy. Construction in Ma'ale Adumim is absolutely imperative, people there have nowhere to live. There are also no differences of opinion regarding the fact that Ma'ale Adumim will remain in Israeli territory under all scenarios, so I don’t understand why this place has to be dried up. The prime minister must make this clear to the Americans.”

So where is Netanyahu headed these days? According to a senior Likud minister, “Clearly, the prime minister wants the Americans to believe that he wants a diplomatic process. He really does want it but not arrive at a solution, only so that they don’t pressure him. That is the ideal situation for him. This way, he keeps his government intact and keeps [Justice Minister] Tzipi [Livni] satisfied.”

Kasriel told Al-Monitor about the right wing, "This will start becoming a problem. The right will not limit itself to the nation-state bill. It will also want construction in the settlement blocs. What we saw this week at the faction meeting — this was only the beginning.”