Prime Minister Benjamin Netanyahu reportedly admitted that he has halted settlement construction because of the delicate international setup, but this is aimed at appeasing the United States, pretending that he is battling rightist coalition forces. 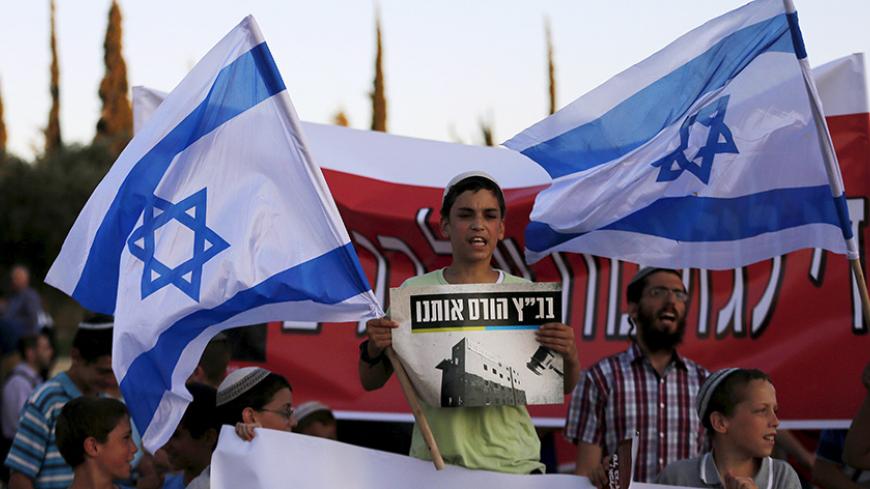 An Israeli protester holds a placard and a flag during a demonstration against a court decision to demolish housing units in the Jewish settlement of Beit El, outside the Supreme Court in Jerusalem, July 8, 2015. - REUTERS/Ammar Awad

On July 14, exactly when reports were flowing in about the signing of the historic nuclear agreement between six world powers and Iran, the Likud Party sent a respectable delegation of five ministers on a tour in Samaria.

Twenty-four hours earlier, at a Likud faction meeting at the Knesset, a clash took place between Prime Minister Benjamin Netanyahu and the heads of Judea and Samaria local councils. These officials argued that construction in Judea-Samaria has been under a de facto freeze and that Netanyahu is not fulfilling his promise of building 300 housing units in the Beit El settlement. Reportedly, Netanyahu did not deny this, and even admitted to them that Israel is not building in the settlements and cannot develop existing settlements due to the tense international situation in which the State of Israel finds itself.

Netanyahu’s response stunned the settlers. At least, that is the impression we get from the angry statement immediately afterward from the settlement umbrella organization — the Yesha Council. The publicized reaction stated, “A government that does not build in Judea-Samaria loses its very right to exist. The argument that the prime minister freezes construction in order to protect the settlement enterprise has long since been refuted. The correct way to protect the settlement enterprise is via development and construction. … The path of obsequiousness and kowtowing [to the world] will lead Israel to the edge of the abyss.”

Five Likud ministers — Danny Danon, Yariv Levin, Ofir Akunis, Ze’ev Elkin and Haim Katz — tried to calm down the ostensibly tense atmosphere between Netanyahu and the settlers. In effect, they went to great lengths to make it clear that if it were up to them, they are completely committed to construction in Judea-Samaria. Katz even promised that “if we need to make waves, that’s what we’ll do. … If there is a freeze on the ground, we need to wake up. We are obliged to do so. We are the ruling party with 30 Knesset members.”

Some of Israel’s media outlets have reported a “new freeze”; that was the headline July 14 in the daily Yedioth Ahronoth, for example. But the burning question is: What really hides behind the Netanyahu-settler confrontation? Is it real or not?

Has Netanyahu really changed his mind? Only in October, in the fervor of the election campaign, the prime minister instructed the government to shorten the planning and building procedures for some 1,000 housing units in the Ramat Shlomo and Har Homa Jerusalem neighborhoods. He even defended this decision in the Knesset when he said that Israel possesses full rights to build in the Jewish neighborhoods of Jerusalem and in the settlement blocs.

Thus, it is not at all clear that Netanyahu is backtracking on his pro-settlement position. At the moment, Netanyahu is not keen on bandying about settlement-construction issues for tactical, international reasons. This is especially true as tension has risen to new heights between him and the United States in the background of the nuclear deal. In addition, with regard to domestic politics, Netanyahu has been working on wooing the Zionist Camp into joining the government. Thus, to lay the groundwork for warming up relations with the Zionist Camp, he would not want to appear as someone accelerating construction in the territories.

According to Peace Now Settlement Watch Director Hagit Ofran, construction in Judea-Samaria has not been halted and reports of a new freeze have no factual basis. Ofran told Al-Monitor that updated data (for the beginning of 2015) actually show a 200% jump in construction when compared with the corresponding period last year. “There is a lot of building going on, such as in the Ariel and Efrat settlements. It’s a real construction craze. We see Defense Minister [Moshe] Ya’alon authorizing all kinds of things to the settlers that had not been authorized before. It could be that at this moment it was decided to slow down the planning pace for tactical reasons, but the complaints only stem from the fact that they have become accustomed to a frenzied planning pace in recent years. The Netanyahu government, in contrast with what the settlers claim, is good to the settlers.”

So what are the settlers complaining about, and why? Former Knesset member Mossi Raz of Meretz, who has been keeping close tabs on construction in the settlements over the years, argues that what we are seeing is, clearly, a game being played between the settler leaders and the prime minister. Raz said, “For the outside world, Netanyahu wants it to seem that no construction is going on. The settlers also know that his statements are geared to the outside world. But they like to complain, they’ve always acted this way. After all, ever since 1967 the settlers have been saying that ‘they don’t let us build,’ yet somehow, though ostensibly without being allowed to build, they went from zero to hundreds and thousands of homes. According to my follow-up, there has been construction going on in the recent year as well.”

Raz also told Al-Monitor that the current complaints of the settlers are “connected to what’s going on with [President Barack] Obama. It’s part of the whining syndrome vis-a-vis the United States. Netanyahu supposedly tells Obama, ‘I’m freezing construction and that is causing me political problems, you are pushing us into a corner.’ As far as the settlers are concerned, they know that if they would say, ‘What a wonderful government, we are building on every hilltop’ — that would raise the ire of the press, the human rights organizations and the Americans. Their technique in the 48 years of occupation is to say, ‘They are all against us.’ This is their strategy, and it is very shrewd.”

Corroboration of Raz’s theory can be found in the words of Internal Security Minister Gilad Erdan in an interview with the Israeli army radio station the morning of July 14. Erdan was questioned regarding the clash between the prime minister and the settlers and the purported construction-freeze decision. Erdan answered that he really hopes that it isn’t true, adding, “I also heard from the prime minister’s people that no such statement was made. … Beit El is an important settlement with Jewish history, we have thousands of years of rights [to that site] and we have every reason to fulfill our commitment. I hope that we’ll build hundreds of housing units there, as we’ve committed ourselves to do.”

When the interviewer stuck to his guns and asked bluntly if there was indeed no construction in Judea-Samaria despite a right-wing government including the HaBayit HaYehudi Party, Erdan said, “I’m not sure if that’s true. I think that there is construction. Since, unfortunately, Israel has all kinds of organizations such as Peace Now that deal with denouncing us and heating up the territory, I have no intention of starting to count [land] tenders. As far as I’m concerned, construction is necessary.”

Thus perhaps, the real answer lies in these words. Construction is going on but the right is playing a cat-and-mouse game and acting as if there’s a new settlement construction freeze, to serve everyone’s interests: Netanyahu vis-a-vis the United States and the Zionist Camp; the settlers, who disseminate a false reality of a right-wing government plotting against them; and the Likud ministers, who demonstrate their determination and resolve to their right-wing electorate.