Does Netanyahu have plan for settler withdrawal?

The settler movement is anxious about the possibility of the Israeli government making a deal that would force them to leave. 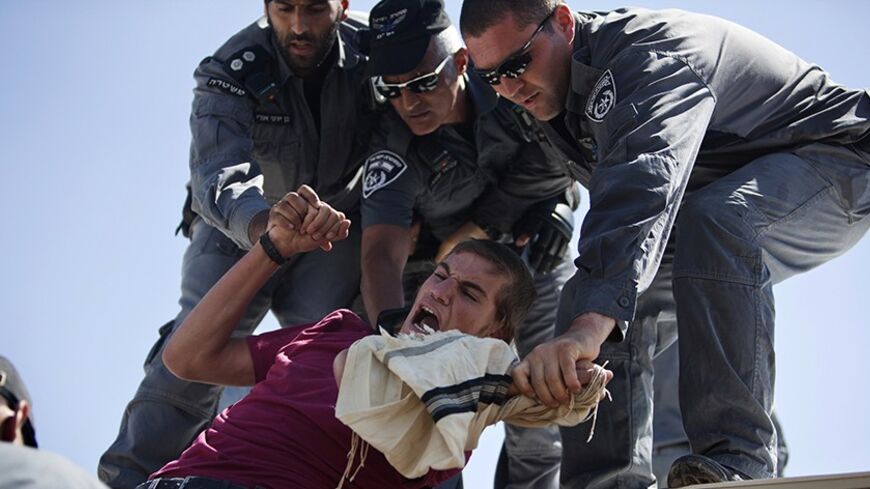 Israeli police scuffle with a Jewish settler as they remove him from a roof on which he barricaded himself in the illegal outpost of Migron, near the West Bank city of Ramallah, after eviction orders were handed to residents Sept. 2, 2012. - REUTERS/Nir Elias

The reactions of the settlers and their political associates to rumors that US Secretary of State John Kerry will manage to push forward the two-state solution are reminiscent of the symptoms a junkie experiences in the first stages of withdrawal. Even before the US proposal document could become official, the Yesha Council, the settlement umbrella organization, produced a film slamming Kerry. Defense Minister Moshe Ya’alon labeled him “messianic” and “obsessive,” whereas Economy and Trade Minister Naftali Bennett accused Prime Minister Benjamin Netanyahu of an “irrational loss of values.”

Although the current Israeli government is the most right wing in the state's history, the settlers are restless. Even before the ministers conducted a preliminary discussion about a document that has yet to be born, the settlement organizations are buying giant ads in newspapers, reminding their representatives in the Knesset and government of their oath of allegiance to the Greater Land of Israel or to the annexation of the territories.

Local council heads in the Samaria region launched a “Samaria on the Bar” campaign, fanning out over pubs in the center of the country to treat the young patrons to alcoholic beverages produced in the settlements. Between nibbling and imbibing, the clients are also treated to generous portions of Zionism, tinged with a touch of occupation.

It is therefore no wonder that reports to the effect that the document of principles being formulated by Kerry includes a proposal to vacate distant settlements is driving the settlers crazy. For decades they were told that they were the “salt of the earth,” “new pioneers” and “harbingers of salvation.” Now, suddenly, they are being treated like enemies of the state, threatened with a cutoff of funding and being uprooted from their homes.

Western states that for many years had made do with lip service against the settlement enterprise began boycotting their products. Even though Israeli administrations — all of them, without exception — encouraged them to settle throughout “Judea and Samaria,” opened legal loophole after legal loophole for them and invited them to take anything they wanted.

Even late founder of the leftist Meretz Party Shulamit Aloni, the hero of human rights and of the left who passed away Jan. 24, participated in a 1995 compromise that enabled the establishment of the Olive Hill neighborhood in the settlement of Efrat. In an interview with Hani Kim in Haaretz on Jan. 6, 1995, the late Knesset member Hanan Porat of the National Religious Party, one of the settlement movement leaders, boasted, “The construction on Olive Hill, with the approval of the ministerial committee of which Shulamit Aloni is a member, is very good news.” That very week, she scolded Knesset member Ahmad Tibi for “stirring up” the Palestinians about the expropriation of land in the vicinity of Ariel for the sole purpose of building by-pass roads. Once she found out that the parcels were intended for building a road to the small settlement of Psagot, Aloni said that if this was true, she would retract her words. It was not the only occasion that Aloni was misled by the settlers and their supporters in the government, and she acknowledged this with regret.

Zehava Gal-On, who was then-secretary-general of the Ratz Party and is now chair of the Meretz Party, said that she was “stunned” by Aloni, then a member of then-Prime Minister Yitzhak Rabin's cabinet, who voted in favor of the construction of dozens of new houses in the settlement. Gal-On said, “If this were any other government, we would already be lying in the roads [in protest].” Her colleague at the time, Knesset member Avraham Poraz, claimed his party’s ministers were “humiliating themselves” by remaining in government.

During the term of the Rabin government, the construction in the West Bank of 9,850 housing units (launched during the previous administration's term) was completed. At the time of the establishment of Rabin's administration in 1992, before the Oslo Accord, the settlers numbered 100,500. In 1996, the year in which the Likud Party, headed by Netanyahu, returned to power, their numbers reached 141,500.

At a meeting with members of his Labor Party, Shimon Peres, then foreign minister, announced that he did not believe in any evacuation of settlements whatsoever, Kim wrote in the interview with Porat. During the seven years after the signing of the Oslo Accord until September 2000, when the second intifada broke out, the number of housing units in the territories grew by 54%. The sharpest increase — 4,800 housing projects — occurred in the year 2000, during the term of the Labor-Meretz government.

True, the settlers have enjoyed the bounty of the land for years, and their politicians are conducting a de-legitimization campaign against Israeli and Palestinian members of the peace camp. True, the settlers wish to impose their ideology and interests on an entire country, and they indulge the “price tag” criminals. But the responsibility for turning the settlers into lords of the land is, first and foremost, that of those governments and politicians who supplied them with more and more of the drug that addicts its users to the illusion that one can expand the settlement enterprise, deepen the occupation and at the same time conduct negotiations over the division of the land and maintain Israel’s international standing. The Babylonian Talmud has this to say about such cases: ''It is not the mouse which steals; it is the hole that steals.'' (BT Gittin 45a) Meaning, the party guilty of the theft is the one who opened the hole in the wall, not the one who passes through it to eat the cheese.

The Israeli politicians who nurtured the settlements cannot shake off responsibility for the thousands of families who enjoyed the status of favorite sons. Neither are Western leaders, who did not set an appropriate consequence for ignoring the issue, entitled to shirk responsibility for the fate of the people who will be forced to pay the heaviest personal price for a diplomatic arrangement. Now, when the time has come to choose between an isolated Greater Land of Israel and a whole and accepted State of Israel, anyone who was complicit in the addiction process, directly or indirectly, must take part in the withdrawal process.

Experts from Retorno, an organization in Israel that treats drug, alcohol and gambling addictions, explained, “The addict is exposed to sensitive and dependent situations, and it is thus advisable that the withdrawal process be fully accompanied by professionals, by enveloping support and a continuous treatment process.” Retorno experts stress that the withdrawal process might be deeply-felt and gradual.

The complaint voiced recently by the mayor of Ma’ale Adumim, Benny Kasriel, to my colleague Mazal Mualem, that during the time of the Netanyahu government the pace of construction in his town was markedly slower than the wave of construction during the Rabin government — might indicate that this deep, slow and gradual process is already well-underway. “Absurdly,” as Kasriel said, maybe it should fall precisely on the leader of the Israeli right, Netanyahu, to lead the withdrawal process.