Prime Minister Benjamin Netanyahu hopes to get immunity in exchange for his willingness to annex West Bank settlements. 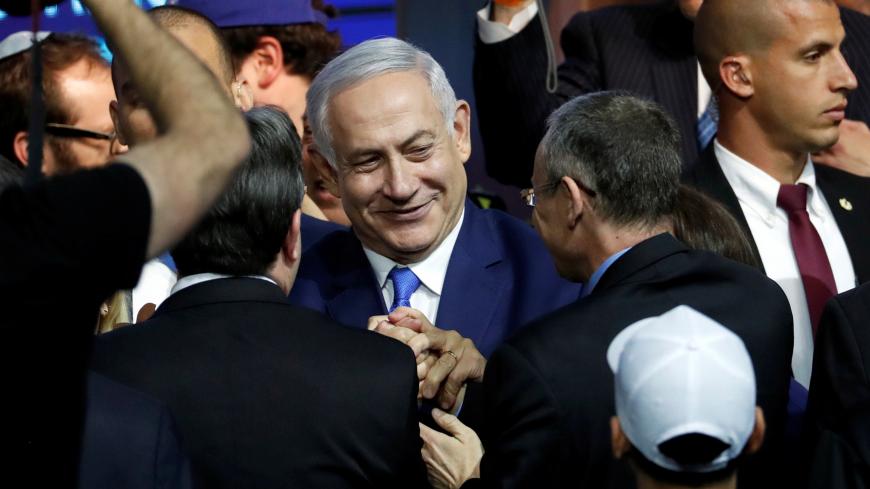 Israeli Prime Minister Benjamin Netanyahu is greeted by supporters of his Likud party as he arrives to speak following the announcement of exit polls in Israel's parliamentary election at the party headquarters, Tel Aviv, Israel, April 10, 2019. - REUTERS/Ronen Zvulun

As of this writing, the New Right party led by ministers Naftali Bennett and Ayelet Shaked has not garnered sufficient votes to get into the Knesset — it did not amass the four-mandate threshold. When the extent of his party’s election failure became clear after the polls closed on April 9, Bennett — the man who crowned himself Israel’s next defense minister — claimed the soldiers would take care of his party the way he always looks out for them. He was referring to the votes of tens of thousands of serving soldiers that are counted after the other ballots and which could yield a sufficient number of votes for the New Right to cross the electoral threshold into the Knesset. However, even if the soldiers save him from oblivion, Bennett’s party will only have four representatives in the new Knesset, depriving him and Shaked of any significant sway in the radical right-wing government that Netanyahu is expected to form. That said, the seeds sown by Naftali Bennett in Netanyahu’s fourth government will sprout in Netanyahu’s fifth.

Bennett first flew the banner of annexation of West Bank lands in 2012. In the 2019 election campaign, he drew all the right-wing parties, including Netanyahu himself, into a competition of annexation declarations. The two words “territorial annexation,” once considered acceptable only in radical circles, have slipped into legitimate public discourse. After the right wing crushed Palestinian President Mahmoud Abbas, depicting him as an obstacle to peace, and with most Israelis disbelieving that peace with the Palestinians based on a two state for two people solution is possible, the annexation prospect no longer sounds so absurd. As far as the right-wing electorate is concerned, annexation may even be de rigeur.

Netanyahu has thus far thwarted all attempts by the right to legislate annexation of the West Bank. In February 2018, he blocked a proposed bill to impose Israeli sovereignty in the settlements, authored by Knesset members Yoav Kisch of the Likud and Bezalel Smotrich, then a member of HaBayit HaYehudi and now No. 2 in the alliance known as the United Right. Netanyahu argued at the time that promoting such legislation prior to the presentation of President Donald Trump’s highly touted plan for Israeli-Palestinian peace could undermine future annexation. That was also the argument he used to block a proposed bill imposing Israeli sovereignty on the settlement town of Ma’ale Adumim.

Things are different now. Netanyahu will have no choice. Despite his tremendous achievement in obtaining the renewed trust of the Israeli electorate that granted him a fifth term in office, Netanyahu is more vulnerable to pressure than ever before. On April 6, Netanyahu said in a Channel 12 interview that discussions were underway on extending Israeli sovereignty to the Etzion settlement bloc. To buttress his argument in this regard, Netanyahu noted that he had convinced Trump to recognize Israel’s sovereignty over the formerly Syrian Golan Heights and over Jerusalem as Israel’s capital. “I will not divide Jerusalem, I will not evacuate any community and I will make sure we control the territory west of Jordan,” he declared. To underscore the seriousness of his intentions and draw the borders of his planned annexation, he added, “Will we move ahead to the next stage? Yes. I will extend sovereignty, but I don't distinguish between the settlement blocs and the isolated ones because each settlement is Israeli and I will not hand it over to Palestinian sovereignty.”

On March 26, Netanyahu cut short a visit to Washington due to tensions along Israel’s border with Gaza. On the plane home, a senior Israeli official told reporters that US recognition of Israeli sovereignty over the Golan affirms the principle that allows control of land captured in a defensive war. “Everyone says you can't hold an occupied territory, but this proves you can. If occupied in a defensive war, then it's ours,” the unnamed official said.

Netanyahu assumes he can count on Trump’s backing for a certain measure of annexation, at least of major settlements, i.e., the Etzion bloc and the settlement towns of Ma’ale Adumim and Ariel. However, the criminal indictments on charges of corruption lying in wait for him make him more vulnerable to pressure and increases the appetite of his prospective right-wing coalition partners.

During the intense election campaign, which included numerous interviews with Israeli media, Netanyahu evaded questions on whether he would push for legislation to protect himself from indictment. Meanwhile, Knesset member Smotrich, who is expected to be named a minister in Netanyahu’s next government, is working on such legislation. Shortly after results of the exit polls were aired, he declared unequivocally, “The right-wing bloc has won. A right-wing government will be established in the State of Israel and will serve out a four-year term.” Smotrich said the key to such longevity would be restoring legislation that existed until 2005 and provided Knesset members with automatic immunity from criminal prosecution. “The prime minister promised two days ago to extend sovereignty over Judea and Samaria [the West Bank]. That promise must be kept,” he said in conclusion. In other words, the alliance of right-wing parties would hand Netanyahu the legislation required to protect him against criminal indictment, and he, in turn, would fulfill his promise to extend Israeli sovereignty over the territories — a sort of “You scratch my back, I’ll scratch yours” deal.

Netanyahu is a seasoned political fox. He knew what he was doing when he floated the sovereignty issue in the lead up to the elections. He did so not only to attract settlers’ votes but also to pave the way for the deal he knew he would have to make with other right-wing parties in order to form a coalition. All that remains is to agree on the annexation borders — the settlement blocs to be under Israel’s sovereignty. This will be the departure point for negotiations on forming the government coalition — not on the very question of annexation, but on its extent.

The right-wing government that Netanyahu will apparently form in the next few weeks will annex the territories. His coalition partners — the United Right, the ultra-Orthodox Shas and Yahadut HaTorah parties — and the center-right Kulanu Party led by Moshe Kahlon will not stand in his way. All of them favor annexation, none believes in the peace process with the Palestinians and each depends on the other. Netanyahu depends on them, and they on him. Without him, each of the new coalition parties is small, even tiny. Some just barely made it into the Knesset.

They will, therefore, promise him a “French Law” or another similar law that protects incumbent prime ministers from criminal prosecution. Netanyahu, for his part, will satisfy their hunger for more territory and more sovereignty. The task is simpler now that the tenant of 1600 Pennsylvania Avenue is not throwing up any roadblocks.