Benjamin Netanyahu must cope with a Trump administration whose policies are not yet known while facing pressures from the far right to annex settlement blocs and other pressures from Defense Minister Avigdor Liberman, the prime minister's rival from the pragmatist right. 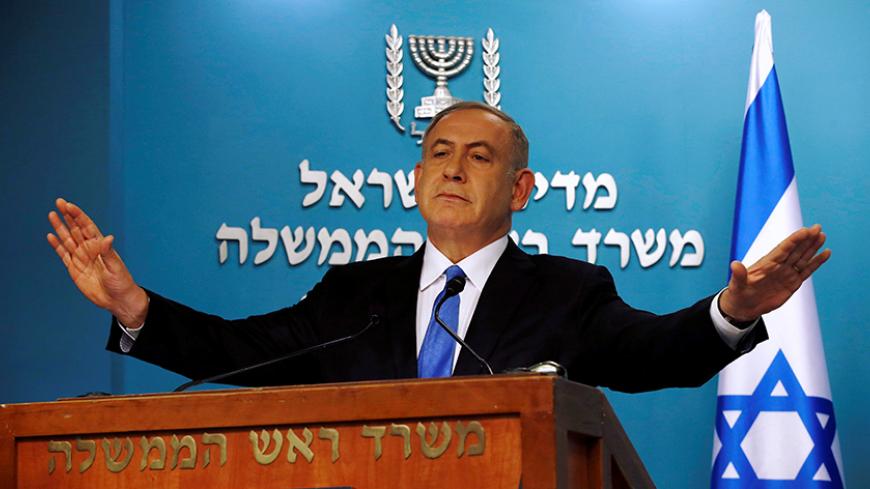 When he served as prime minister for the Likud, Ariel Sharon was often pressured by his own party to reject US demands to rein in construction in the settlements and move forward in the negotiations with the Palestinians. Yet Sharon knew exactly how to derive political and diplomatic advantage from this pressure. The angrier people were at him, the better excuse he had for the White House as to why his hands were tied in his dealings with the Palestinians. Washington would then turn a blind eye to any continued construction in the West Bank.

Prime Minister Benjamin Netanyahu also has taken advantage of this dynamic ever since returning to power in 2009. Whenever the Obama administration applied pressure on him, he cited his political constraints at home to show that he had limited space to maneuver politically. The more extreme the Likud Party grew, the more he could use this as an excuse. This benefited Netanyahu in another way, too. It allowed him to present himself before Likud supporters as the one person standing up to the pressures of a hostile US administration. His troubled relationship with President Barack Obama, which only deteriorated over the years, helped Netanyahu considerably in all of his recent election campaigns and whenever he found himself entangled in some political crisis.

Paradoxically, it is the Trump administration that presents Netanyahu with an unusually complex political and diplomatic challenge. Ostensibly, Netanyahu was just given the “president of his dreams” on a platter. He could now fulfill all the deepest desires of the Israeli right. But since the Trump inauguration Jan. 20, Netanyahu has instead found himself trying to ward off a barrage of pressure from the right. Spearheading that campaign is Netanyahu rival Naftali Bennett, the education minister who claims that the new US administration offers Israel a historic opportunity to annex the settlements.

Suddenly, Netanyahu found himself in a position that he is not used to, one that could cause him serious harm among his power base on the right. He must now be the voice of moderation in his government and block any initiatives proposed by its more right-wing members. Netanyahu is well aware that HaBayit HaYehudi leader Bennett is scoring political points at the prime minister's expense, but nonetheless, his hands are tied. He cannot burn all his bridges with the international community. Furthermore, Trump is unpredictable, and Netanyahu does not know what his policy will be. For instance, will he really move the US Embassy to Jerusalem, or will he renege on his promise?

Netanyahu’s first test came less than two days after Trump’s inauguration. Bennett started waving about his Law for the Annexation of the settlement town of Maale Adumim in every possible forum, announcing that he would submit it for a vote before the Ministerial Committee for Legislation. He and the No. 2 person in his party, Justice Minister Ayelet Shaked, presented a determined vision in contrast to Netanyahu’s efforts to postpone the discussion of the law until after his first visit to the White House, planned for next month.

Bennett used Twitter to lash out at the prime minister about this sensitive subject. On Jan. 21 he posted, “We have entered a new political era. For the first time in 50 years, the decision lies with the prime minister: sovereignty or Palestine. Continuing the Bar-Ilan/Palestine approach will lead to generations of tears. We will work to attain sovereignty.” Bar-Ilan was a 2009 speech by Netanyahu on the two-state solution.

As if that was not enough, various plans popping up in the Likud have also pushed Netanyahu into a corner. These include one put forward by Yisrael Katz, who serves as both transportation minister and intelligence minister. Over the weekend he announced that he plans on presenting his own “Israeli Initiative Program” for discussion by the Cabinet. This plan calls for the annexation of the settlements surrounding Jerusalem, including Maale Adumim, Givat Ze’ev, Gush Etzion and Beitar Illit. Katz wants them incorporated into what he calls “Metropolitan Greater Jerusalem,” though they would remain independent municipal entities. As the minister wrote on his Facebook page, “This is the first necessary political step in the Trump era.”

Jan. 22 should have been an important milestone for the Israeli right at the start of the Trump era. All of the annexation initiatives should have been discussed at the Security Cabinet in order to update the coalition’s policy in accordance with anticipated changes in Israel’s relationship with the new US administration. However, Netanyahu managed to postpone the Security Cabinet trap at least until after his February meeting with Trump. Netanyahu expected a phone call with the new president just a few hours after the Cabinet meeting. The prime minister told the Cabinet members that the Americans had begged him not to surprise Trump with any diplomatic moves that were not coordinated with the new president first.

HaBayit HaYehudi did not really buy into Netanyahu’s explanation about messages from the White House. Shaked went so far as to mock Netanyahu’s claim in an interview with Army Radio. “I did not receive a message from Trump’s office either way. It is important to realize that the rules of the game have changed, and that we must stop playing by the old rules. The message we are getting from the United States is, 'Come tell us what you want.'”

While blocking these attempts at annexation, Netanyahu is also trying to adjust himself to this new era and a renewed struggle to win votes from the right. And so he went out of his way to explain that he shares the vision of applying Israeli sovereignty over all the settlements, and announced at a meeting of the Security Cabinet that all restrictions on construction in Jerusalem would be lifted and that construction would be expanded in the settlement blocs. The prime minister said, “The city [of Maale Adumim] will be under Israeli sovereignty, but now is not the right time to take new steps without coordinating with the US government.”

That evening, Netanyahu indeed spoke with Trump on the phone. Both sides reported that it was a good conversation, but anyone looking for a green light for the right’s initiatives came away disappointed. Apart from some general talk about security cooperation, the international war against terror and negotiations with the Palestinians, nothing of substance was apparently said.

The question now is where things are headed in terms of the new administration’s policies. Furthermore, how long will Netanyahu be able to maneuver between the various diplomatic constraints and his personal struggle against his rivals, both in general and in the Likud?

This latter question is especially important now that the prime minister has a new rival in the coalition, the leader of Yisrael Beitenu, Defense Minister Avigdor Liberman. Liberman is trying to insert himself into the position of the pragmatic, moderate right. What this means in practice is that he opposes annexation, at least at this stage. He has also come out against Bennett, which is something that Netanyahu cannot allow himself to do right now.

Caught between these pincer movements, with the criminal investigations into his dealings bearing down even harder on him, Netanyahu is vulnerable from every possible political angle. If his hard-core voting bloc starts trickling toward Bennett, he could find himself dragged toward extreme political initiatives, regardless of their ramifications in the international arena.