How Liberman is positioning himself to lead Israeli right

Avigdor Liberman's strategy to take leadership of the Israeli right wing was on display at a recent Yisrael Beitenu meeting. 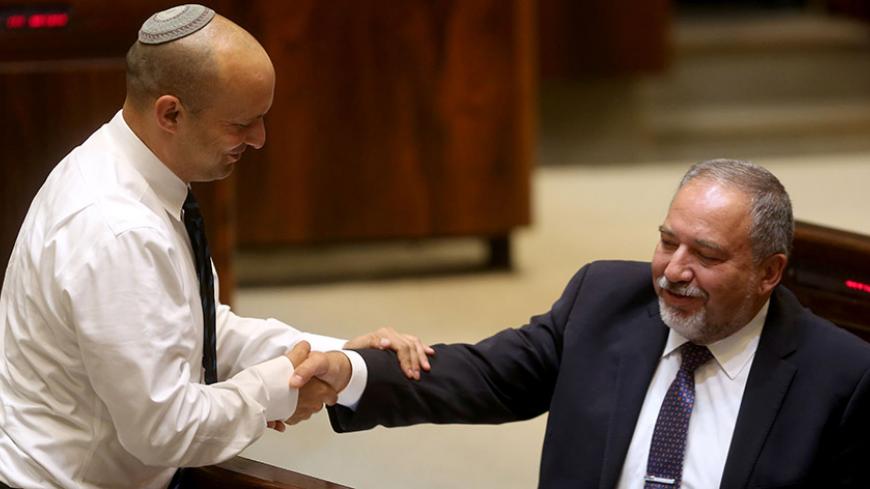 Avigdor Liberman (R) greets HaBayit HaYehudi leader Naftali Bennett during a session of the Israeli parliament in which deputies debated whether to approve Liberman's appointment as defense minister, Jerusalem, May 30, 2016. - MENAHEM KAHANA/AFP/Getty Images

One day after the deadly Jan. 8 vehicular attack in Jerusalem’s Armon HaNetziv neighborhood, Yisrael Beitenu's Knesset faction meeting focused on the strategic approach recently espoused by its chairman, Defense Minister Avigdor Liberman. The approach, which Liberman has deployed over the past few weeks, is intended to position him as leader of Israel’s moderate right.

In normal times, the comments Liberman made would have been perceived as signs of a bitter clash between him and another candidate for leadership of the right, Education Minister and HaBayit HaYehudi Chairman Naftali Bennett. While Liberman’s remarks were overshadowed by the tempest surrounding the criminal investigation into Prime Minister Benjamin Netanyahu’s various dealings, they nonetheless shed light on the struggle emerging among the Israeli right. It is now clear that it will be one of the most intriguing aspects of the next election cycle.

Meetings of Liberman’s faction are generally open to journalists. The chairman always starts with a detailed statement about his positions on pressing issues and then allows reporters to ask questions. This time, it was hard to ignore the common thread running through all the issues he raised with the media present, including Al-Monitor.

Liberman presented himself as the responsible adult in the room and the voice of reason on the right. He adopted the stance of officialdom, a leader who takes all of Israel’s strategic considerations into account. In other words, Avigdor Liberman 2017 is a far cry from the populist Avigdor Liberman of the 2015 elections, when he led a vicious, uninhibited campaign against Israel’s Arab population.

The Yisrael Beitenu leader has his sight set on Bennett as his main rival within the non-Likud right. Liberman is doing everything possible to present the HaBayit HaYehudi chair as delusional and messianic, as irresponsible and childish and as tossing about meaningless promises to his supporters on the far right while putting Israel’s foreign relations at risk.

The Jan. 9 faction meeting took place against a backdrop of bitter feelings surrounding the vehicular attack in Armon HaNetziv, which left four Israel Defense Forces (IDF) soldiers dead. Liberman decided not to take a more bellicose stand and overheat the already volatile mood on the right. Instead, he remained faithful to his strategic approach, according to which there are now three streams on the Israeli right: the populist, messianic and pragmatic. Liberman is determined to present himself as the leader of the pragmatic wing.

In his opening remarks, Liberman tried to dismiss the claim circulating in far-right circles that the soldiers at the site of the attack had failed to respond quickly enough, because they were afraid to get entangled in a criminal trial. This view stems from fallout from the highly publicized trial of Sgt. Elor Azaria, the soldier convicted of manslaughter for killing a wounded Palestinian assailant.

“It is simply incorrect,” the defense minister asserted. “Since the Elor Azaria [shooting], we have taken out 39 terrorists and wounded 15 …"

He then ridiculed Bennett’s call to pardon Azaria while trying to paint the chairman of HaBayit HaYehudi as taking the position of the more aggressive right. “What we are saying is very important,” Liberman said. “I recommend that we all stick to Article 442 of the law concerning military courts. Anyone unfamiliar with it can go online and read about it. According to that law, the process [of requesting pardon] can only begin after sentencing. If I might offer some advice to Elor and his family, it is to stick to the law concerning military courts, to follow it and not to appeal.” It was easy to forget Liberman's firm support of Azaria in court, when he was just a Knesset member in the opposition.

The “new Liberman” also later made it indisputably clear that he opposes the initiative to annex the Maale Adumim settlement, an initiative raised against the backdrop of right-wing celebrations over the new, presumably pro-Israeli right US administration of Donald Trump. Bennett has led this campaign since the US elections and has called on Israel “to impose Israeli law on the predominantly Jewish areas of Judea and Samaria: Maale Adumim, the Jordan Valley, Ariel and Ofra. In the rest of the area, there will be Palestinian autonomy.”

Liberman accused Bennett and other ministers whom he considers populist — such as Culture Minister Miri Regev, who famously remarked, “Who is Obama? Obama is history" — of impugning Israel’s relationship with the United States. “Annexing Maale Adumim or all the settlement blocs or all of Judea and Samaria for that matter is a dramatic decision,” Liberman said. “It is a strategic matter. It cannot be done simply through legislation in the Israeli Knesset. Anyone who thinks that this can be done without first coordinating it with the United States is mistaken."

Finally, Liberman took great pleasure in bursting the balloon when it came to Bennett’s pride and joy, the Regularization law legalizing unauthorized West Bank settlements. Liberman remarked, “This law, which passed a preliminary reading, will not advance any further. … My position is that this law is inappropriate. … There was a ruckus around it, as you know. The Regularization law was not passed and will not be passed, but it nevertheless seems to be the straw that broke the camel’s back for the president of the United States. We took a blow in the Security Council [with Resolution 2334, affirming the illegality of settlements], and that is a direct consequence of the Regularization law, without it even being passed. … I am trying to act responsibly and sensibly and will continue to act that way in all of the arrangements we reach, whether they are about settlements in Judea and Samaria or the Middle East in general. We must be patient and really start to engage in serious, in-depth dialogue. Only then can we take the appropriate measures.”

The response from HaBayit HaYehudi was unequivocal: If the Regularization law does not advance in the Knesset, there will be a coalition crisis. Knesset member Betzalel Smotrich said just that in an interview with Army Radio Jan. 11. As he put it, should the Regularization law fail to pass, it would undoubtedly result in the “collapse of the coalition and early elections.”

Polls show that the right-wing bloc is not losing any strength. In fact, it is getting stronger, despite Netanyahu’s entanglement in criminal investigations. Both Liberman and Bennett are well aware of this and are locked in a struggle to win the votes of disillusioned Likud supporters. A poll conducted by the Walla website puts numbers to this fight. It found that if elections were held today, the Likud would drop to 24 seats, while Yesh Atid, led by Yair Lapid, would be the biggest party with 27 seats. As for the party blocs, however, the figures remain the same. Both Liberman and Bennett are benefiting from Likud's decline. Liberman's party would take nine seats to Bennett's 13.

As things now look, the fight over Likud voters will likely be bitter, but those voters will stay in the right-wing camp. In many ways, this fight has the potential to reconfigure the power structure of the Israeli right.