By advancing the regularization bill for legalizing West Bank outposts, HaBayit HaYehudi Chair Naftali Bennett shows the settlers that he is fighting for their cause. 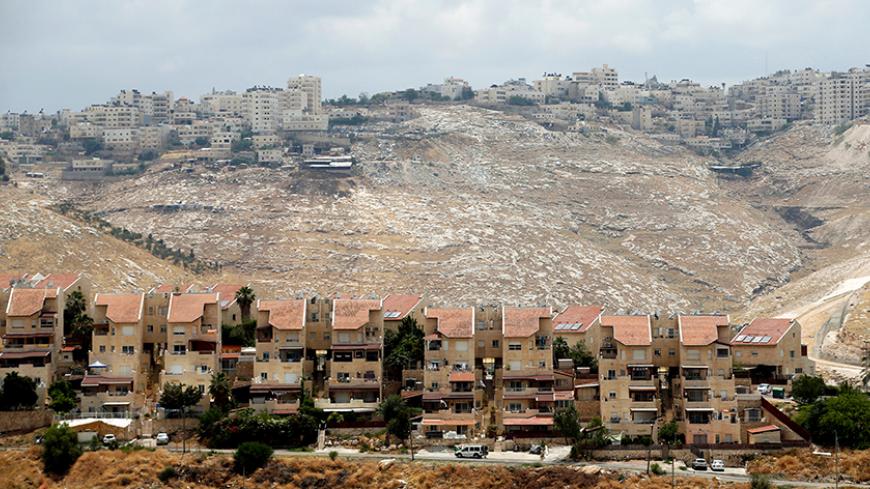 Houses are seen in the Jewish settlement of Ma'ale Adumim, with the Palestinian village of al-Eizariya in the background, West Bank, May 24, 2016. - REUTERS/Baz Ratner

Chairman of HaBayit HaYehudi Naftali Bennett may have scored a victory over Prime Minister Benjamin Netanyahu and Defense Minister Avigdor Liberman on the evening of Nov. 13, when the Ministerial Committee for Legislation approved the regularization law proposal — but it was just a tactical win.

Bennett did boast after the voting was over that it was “a historic move of regulating settlements in the West Bank,” but he also knows that the new law will never stand the test of a Supreme Court appeal. State Attorney General Avichai Mandelblit warned the committee members yet again that he could not defend the law before the Supreme Court, not least because it violates international law.

Knesset members from HaBayit HaYehudi and the Likud formulated the regularization law. It is intended to prevent the evacuation of homes in the Amona West Bank outpost, which was established on privately owned Palestinian land, even though the Supreme Court ruled that the settlement must be evacuated by Dec. 25. It is also intended to prevent future rulings regarding places in which the settlers built homes on privately owned Palestinian land.

According to the proposed law, in cases of unauthorized outposts the state will expropriate the Palestinian landowners’ rights to use their own land. The law will cover settlements where the state was involved in their creation, and absolve their residents of the charge of illegal settlement. Palestinian landowners who are able to prove ownership will receive financial compensation.

Last week, Netanyahu and Liberman attempted to convince Education Minister Bennett and Justice Minister Ayelet Shaked to postpone presenting the law before the ministerial committee to avoid embarrassment before the Supreme Court, as well as damage to Israel’s reputation internationally. Bennett and Shaked not only refused to succumb to the requests and pressure. They also spearheaded a well-planned ideological conflict, which was very much like an organized campaign.

Bennett and Shaked pushed forward this move despite knowing that even if they would win the vote in the committee — as indeed happened — the chances of the Knesset approving such a law were slim at best. Then, even if the law was passed, the Supreme Court would revoke it.

What the leaders of HaBayit HaYehudi faced was pressure from the right-wing settlers, who form their core constituency. They demanded that the two ministers fight against what they consider as the expulsion of Jews from their homes. Until just a few weeks ago, neither Bennett nor Shaked showed any real enthusiasm to fight for Amona, and that is putting it mildly. Over the past few days, however, they realized that this struggle has the potential to benefit them politically on the right.

Then there was the surprising election of Donald Trump as the next president of the United States, which Bennett pronounced to be the best thing to happen to the Israeli right. It provided him with the backwind he needed to fight for the regularization law, based on his assessment that the new administration in Washington will ignore any efforts to bolster the settlements.

Bennet tried to send a very simple message: Netanyahu and Liberman, the two senior leaders of the right, are falling in line with the Supreme Court and lending a hand to the destruction of Jewish homes, leaving him the only person to fight on the settlers’ behalf. The chairman of HaBayit HaYehudi has no intention of resigning from the government, even if the inevitable happens and the regularization law is defeated or revoked. Nevertheless, he will always be able to show the settlers that he took on the struggle on their behalf.

Anyone who has followed Bennett over the last few days can see how he used the media to add fuel to the crisis. On Nov. 10, his staff briefed the press about how he and Shaked refused to succumb to the prime minister’s pressure to postpone the vote in the ministerial committee. This message gained intensity on Saturday night, when Betzalel Smotrich and Shuli Muallem, the two Knesset members from HaBayit HaYehudi who proposed the law, joined the fracas.

On the morning of Nov. 13, Bennett himself escalated the crisis. In an interview with Army Radio, he announced, “We must pass the regularization law. Only 42 days are left until a settlement in Israel is destroyed, God forbid, and that will just be the first of many other, similar instances.” Later in the interview, he took aim at Netanyahu, claiming, “I have been giving the prime minister and others a chance to come up with other opportunities [to solve the legalization of the Amona issue] for a very long time, but now their time is up.”

Later that morning, just before entering the weekly Cabinet meeting, Bennett took advantage of yet another opportunity to make a similar statement. This time he expressed the hope that the prime minister will help correct “this injustice.” Netanyahu was furious when he received reports of Bennett’s statement, and prepared to attack him in the Cabinet meeting.

It quickly became evident that Bennett’s statements were just the beginning of a series of bitter clashes between him, Netanyahu and Liberman, which lasted all of Sunday. At the start of the Cabinet meeting, Netanyahu stated before the cameras that just two weeks earlier the government submitted a request to delay the court-ordered evacuation of Amona by half a year, “with the agreement of all the coalition partners.” Later, he went into greater detail, saying that the attorney general made it quite clear that passing the regularization law before the Supreme Court issues its ruling on the six-month delay request could be detrimental to any chances of getting the delay. Netanyahu wagged an accusatory finger at Bennett, and in the heat of the ensuing argument hissed at him that he was being childish and irresponsible.

Another argument between Bennett and the defense minister broke out later in the day during a meeting of the coalition leaders. Liberman, who despises Bennett as much as Netanyahu, accused him of “acting out of a political whim, which puts the State of Israel and the settlement enterprise at risk.” Bennett and Shaked stormed out of the meeting in response and stood firm in their insistence that the ministerial committee take a vote. As aforementioned, at the end of a very heated day Netanyahu suffered a resounding defeat when even Likud ministers ignored his position and voted at the committee for the law.

Despite all that, this political defeat will have no impact on the coalition’s future, at least as far as Netanyahu is concerned. Bennett won points with the right-wing settlers, but he can’t go much farther than that. The chairman of HaBayit HaYehudi has no interest in holding new elections right now, and above all, he cannot allow himself to be blamed for bringing down the right-wing government.