A ruling by the Jerusalem District Court legalizes the theft of Palestinian lands for the purpose of constructing homes in a Jewish settlement. 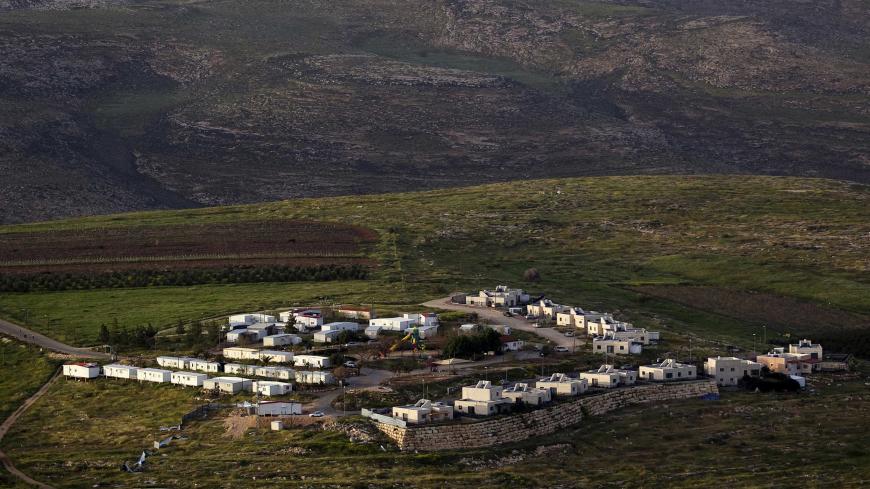 “A strategically important decision” was how Justice Minister Ayelet Shaked categorized the Aug. 28 decision by Jerusalem District Court Judge Arnon Darel. The court barred the Israel Defense Forces from evacuating several homes at the West Bank settlement of Mitzpe Kramim, even though these houses were built on private Palestinian lands, thus legalizing the outpost. Darel ruled that under Israeli law, even legally questionable transactions could be valid if conducted in "good faith," accepting the argument by the settlers and the state that when the land was allocated to build Mitzpe Kramim in the late 1990s, neither of them was aware that it was private.

“Working together intensively we have wrought a change in the state’s policy,” Shaked said, patting herself on the back and praising Attorney General Avichai Mandelblit for overturning his predecessor’s stand on the issue.

Despite Shaked’s satisfaction with the precedent-setting decision, she also knows that the Supreme Court could strike down the lower court’s ruling on appeal and instruct the state to restore the outpost’s lands to their (Palestinian) owners. The justice minister has surely considered the possibility that the “good faith” excuse would not sway the top court’s justices when they weigh the landowners’ heartbreak.

Nonetheless, she spelled out the cause of her pleasure with the message she conveyed in the wake of the ruling to the Supreme Court (apparently addressing the Supreme Court justices). “The injustice done in the evacuations of the Amona and Netiv Ha’avot [outposts] should not be repeated,” Shaked said, referring to the Supreme Court’s rulings in recent years ordering the evacuation of two outposts built on private Palestinian lands. The District Court, as she sees it, righted those wrongs when it “clearly stated that whoever settled [the land] with the state’s approval and in good faith, would not be evicted,” in her words.

In good faith, indeed? Mitzpe Kramim features in a landmark 2005 report on Israel’s unauthorized outposts compiled by attorney Talia Sasson at the request of then-Prime Minister Ariel Sharon. The report said the state had never adopted any decision establishing this and several other outposts. The defense minister did not authorize the establishment of Mitzpe Kramim as an extension of an existing adjacent settlement, no detailed planning was conducted for the outpost, and parts of it were located on private Palestinian lands. The report implicated the defense minister’s adviser on settlements, Ron Shechner, in violating the law. As a result, then-Attorney General Manny Mazoz, currently a Supreme Court justice, ordered Shechner’s firing. In 2012, Shechner was appointed director of the Judea and Samaria Council, an umbrella organization of Israel’s West Bank settlements.

Adi Mintz, Shechner’s predecessor in that post, told Haaretz in 2004 that all the outposts went up in coordination with the top echelons of government. Even Labor Party Chair Binyamin Ben-Eliezer, who served as defense minister in the Sharon government, went along with this policy and ordered his ministry to cooperate with such decisions. According to Mintz, at some point Sharon made a U-turn, but by then there were already 100 outposts, some authorized and some in the process of getting permits.

Since Prime Minister Benjamin Netanyahu came to power, the outposts have resumed their growth trajectory, expanding and multiplying in coordination with the political echelons just like the good old days of Ariel Sharon. Ruling in September 2016 on evacuating the Netiv Ha’avot outpost, the Supreme Court justices nonetheless said, “The authorities’ involvement in erecting the outpost should not affect our decision.”

Sasson, a retired senior state prosecutor, stressed in her report, “There is no way to validate the establishment of an outpost on private Palestinian property, not even post factum.” Nine years on, in its ruling on the illegal outpost of Amona, the Supreme Court also wrote that structures erected on private Palestinian land could not be validated, “not even after the fact.” The Sasson Report, which recommended a series of measures designed to sort out the legal jungle in the Israeli-occupied territories, has been gathering dust in the Justice Ministry’s cabinets.

Shaked boasted that since taking office three years ago, she had been working to pass legislation and administrative measures regulating the status of Israeli settlements, and her “Sisyphean” labors had paid off. Among the regulatory tools Shaked pushed through was February legislation transferring the Supreme Court’s jurisdiction over petitions filed by West Bank Palestinians to the Jerusalem District Court, a measure proven extremely effective by the Mitzpe Kramim ruling. The Sisyphean labors to which Shaked alluded focus on her efforts to appoint judges holding the same views as those of HaBayit HaYehudi, her rightist Jewish Home party.

While the media generally spotlight deliberations by the Judicial Appointments Committee regarding Supreme Court candidates, Shaked also operates below the radar to push through appointments of religious, conservative judges to the lower-level District and Magistrate courts. The path from those benches to the country’s top court is shorter. Until and if they are promoted to that coveted bench, the lower court judges are supposed to grant the judicial wishes of the conservative political right.

Israel’s justice system has for years held a dual and thankless role, serving both as the external fig leaf of Israel’s occupation and the domestic punching bag of the occupation’s leaders. To the outside world, Israel boasts of an independent legal system. To the inside, right-wing leaders blame the court for leaning to the left and against the settlers. Thus, for example, in late July the court saved the state from itself and from international shame, overturning a decision that barred five critically ill cancer patients (immediate relatives of Hamas members) from leaving Gaza for treatment in east Jerusalem. The court’s ruling reversed what amounted to a death sentence for these women. This requisite decision resulted in a deluge of domestic cursing and swearing. Numerous previous rulings legalizing the settlement enterprise and enabling it to prosper are forgotten whenever the justices dare deviate from the path carved out by the right wing and the settlers.

The Mitzpe Kramim decision and other similar ones bring us closer to the day when Palestinians and human rights advocates refuse to take part any longer in the rigged legal process. A few more such “strategic important” rulings will wipe out the occupation regime’s remaining semblance of decency and turn it into de jure apartheid rule. Even a world-leading high-tech power like Israel is unable to both eat its democracy and preen itself in front of the world as the sole democracy in the region.