HaBayit HaYehudi Party Chairman Naftali Bennett said that he is aiming for 1 million settlers in the West Bank by the end of next year. 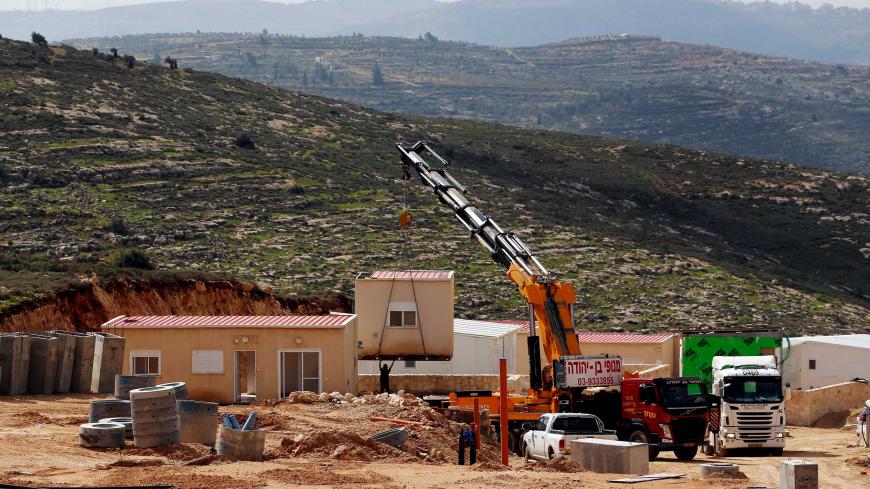 A crane lowers a caravan to the ground in Amichai, a new settlement which will house some 300 Jewish settlers evicted in February 2017 from the illegal West Bank settlement of Amona, in the Israeli occupied West Bank, Feb. 22, 2018. - REUTERS/Ammar Awad

At a festive toast on Aug. 26 ahead of the Jewish New Year that starts next week, HaBayit HaYehudi Chairman Naftali Bennett told West Bank settlement leaders that he envisioned having 1 million settlers by the end of the coming Jewish year.

A comprehensive 2017 analysis by Haaretz newspaper, based on data of the Central Bureau of Statistics from 2015, puts the number of settlers in the West Bank at some 380,000. The figures are partial, according to the analysis, since they do not include Israeli Jews living in east Jerusalem, estimated to number some 210,000. Data compiled by the human rights group B'Tselem indicate that at the end of 2015, there were 127 settlements, excluding 15 Jewish neighborhoods in east Jerusalem and the Jewish settlement in Hebron, and another 100 smaller settlement outposts.

In other words, Bennett dreams of adding close to 250,000 Israelis to the settlers' ranks within the coming year. "We must continue the construction momentum in Judea and Samaria [biblical name of the West Bank]," an excited Bennett told the assembled settlers. "The residents of Judea and Samaria are building the land and realizing the Zionist dream."

Commanders for Israel's Security, a forum of retired generals and their Mossad, Shin Bet and police equivalents, was critical of Bennett's vision. "The settlement of 1 million Jews will eventually force the annexation of 2.6 million Palestinians. Annexing millions of Palestinians will result in the loss of Israel's Jewish majority, the end of the Zionist enterprise and a bitter and violent civil rights struggle," the group announced.

While reaching the 1 million mark within a year is hardly likely, Bennett's party is undoubtedly doing all it can to achieve this goal as quickly as possible. Working in tandem, its three representatives in government — Education Minister Bennett, Justice Minister Ayelet Shaked and Agriculture Minister Uri Ariel — are energetically engaged in removing obstacles and creating facts on the ground to prevent any future accommodation with the Palestinians and to realize their and the settlers' dream of annexing the West Bank to Israel.

Bennett makes no bones about aspiring to annex the territories that Israel has occupied since 1967. In October 2016, at an event in memory of Hanan Porat, one of the first leaders of the settlement movement, Bennett said, "We have to mark the dream, and the dream is that Judea and Samaria will be part of the sovereign State of Israel. We have to act today, and we must give our lives."

And this is how the system works. The settlers set up illegal outposts throughout the West Bank, and Bennett and Shaked then seek retroactive seals of approval for them.

To do so, the justice minister pushed through legislation last year amending the Supreme Court's jurisdiction. Petitions by West Bank Palestinians on specific issues would no longer be under the high court's purview and would be adjudicated by the Jerusalem District Court in its additional role as a court of administrative affairs. Shaked explained that the law would ease the load on the nation's top court, but the intention was clear — to pave the settlers' way in the lower court where the justice minister can exercise more control over the appointment of judges.

Meanwhile, on Aug. 28 the Jerusalem court handed down a precedent-setting ruling in a petition brought in 2013 by residents of the West Bank outpost of Mitzpe Kramim. Mitzpe Kramim was established on private Palestinian land. Still, the court accepted the settlers' claim that they had settled there in "good faith" and therefore their settlement was legal.

Interestingly, in response to Palestinian claims of ownership, the state conceded that the land allocated for the outpost by the state-funded Settlement Division of the World Zionist Organization did not belong to the state and should not have been settled. Judge Arnon Darel nonetheless accepted the settlers' arguments, ruling, "Any deal carried out in good faith between the responsible authority and another person, regarding any property that the responsible thought at the time was government property, will not be invalidated and will remain extant even if proven not to have been government property at the time."

The illegal settlement was thus rendered legal, joining the growing list of settlements. The controversial 2017 Regularization Law pushed by Shaked and her party to legalize settlements built on private Palestinian lands has thus withstood its first test.

Shaked's fellow party member, Knesset member Nissan Slomiansky, praised the ruling. He argued that while the Supreme Court bases its decisions "mostly on affidavits, making it easy for the left-wing organizations and the Arab residents to trick it," the District Court examines facts and demands proof that plaintiffs generally do not have. That, he added, makes the transfer of jurisdiction from the Supreme Court to the District Court doubly important.

Ariel, one of the leaders of the settlement enterprise, was ecstatic. "This is a blessed month for the settlements. May this ruling pave the way for additional, rational rulings by the court," he said, noting that earlier in the month the government's housing cabinet had approved the construction of three new settlements.

In 2002 (a few years after the allocation of land to Mitzpe Kramim), the Settlement Division gave settlers additional non-state land to establish the outpost of Maaleh Rehavam south of Bethlehem. The purpose of the allocation was billed as "tree planting," but its future too will soon be put before the Jerusalem District Court. In all likelihood, the decision to legalize it will be based on the Mitzpe Kramim precedent.

Mitzpe Kramim is also likely to encourage settlement leaders to put up as many outposts as possible so that the court in Jerusalem can grant them retroactive imprimatur.

Even as the court was deliberating the case of Mitzpe Kramim, settlers launched their "conquest" of other targets. According to a Haaretz expose, in recent weeks, fledgling farms have been put up with impunity throughout the West Bank, usually adjacent to recognized settlements such as Eli, Itamar and Shiloh. Thus, for example, temporary structures were erected near the settlement of Eli for agricultural purposes.

This, by the way, was how many outposts started out before being legalized in some form, as in the case of Havat Gilad. For years, the 40 families of that illegal outpost resisted their court-ordered eviction and eventually got their way. In fact, after Havat Gilad resident Rabbi Raziel Shevach was murdered in a January 2018 terror attack, the government voted in favor of building a new settlement on the site at a cost of hundreds of millions of shekels. The move prompted opposition leader Knesset member Tzipi Livni to comment that "it pays to violate Israeli law."

Bennett bases his 1 million settler vision on this system, which his party is leading. Once they reach the million settler mark, they can move ahead with their annexation plans.