Justice Minister Ayelet Shaked will soon be leaving the Justice Ministry, but her legacy will live on in eliminating the Supreme Court's authority over Palestinian petitions involving land confiscations on the West Bank. 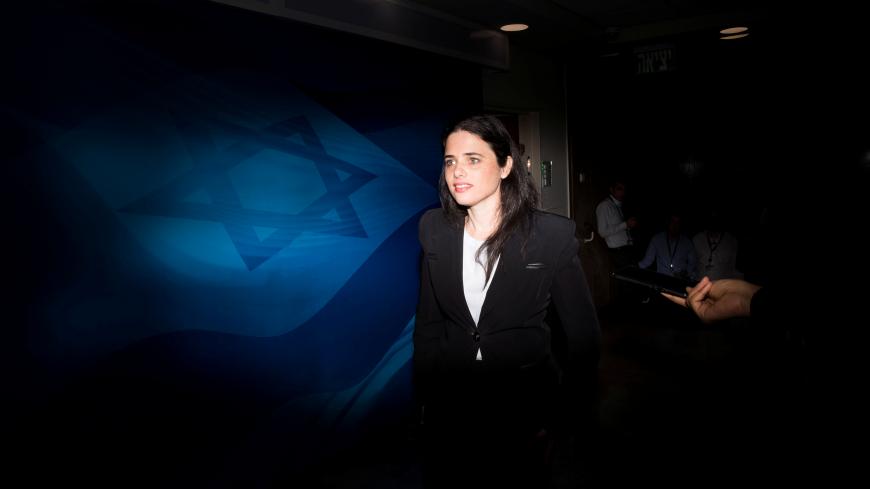 The Jerusalem District Court on April 16 rejected an appeal by Human Rights Watch (HRW) activist Omar Shakir stemming from a decision by Interior Minister Aryeh Deri to revoke his work permit, which allows him to stay in Israel. The court determined that Shakir, an American citizen, must leave the country by May 1.

A 2017 amendment to the Entry to Israel Law allows the government to deny Boycott, Divest and Sanctions (BDS) movement activists the right to stay in Israel. Public Security Minister Gilad Erdan had recommended to Deri that he revoke Shakir’s permit because of his “anti-Israel activism.” Deri agreed, and Shakir challenged his decision in court.

Shakir in his defense claimed that the material collected on him contains no evidence of his support for the BDS movement. The only possible charge against him was that he called on FIFA not to hold soccer matches in West Bank settlements. Shakir said that he had done this before he was granted a work permit and went to work for HRW.

In an interview with Al-Monitor after Deri’s decision, Sari Bashi, an attorney and the Israel/Palestine advocacy director at HRW, explained that the organization does not support BDS and that its staff is not permitted to discuss the issue. Moshe Nakash, director of the Visas Division at the Population Registry, confirmed Shakir’s claim that there was no evidence of him supporting BDS. Nevertheless, the Jerusalem District Court rejected his appeal, so he will be deported.

In an interview with Al-Monitor, Michael Sfard, Shakir’s attorney and a leading human rights lawyer, said that the court’s ruling was the first of its kind in Israel in that it determined that defending the rights of Palestinians by taking action against the settlements is illegitimate. He added that this not only impacts Shakir and HRW, but every human rights organization in the country.

“It is the job of these groups’ activists to expose the injustices of the occupation,” Sfard said. “Even if Omar Shakir is deported, and another person is recruited to replace him, the group’s activity will remain the same, and the posts and reports [the new staffer] writes will say the same thing: Don’t operate in the territories because it infringes on the rights of Palestinians.”

Sfard also said that it is the goal of the government to isolate human rights organizations. With the decision against Shakir, he asserted, “The Jerusalem District Court aligned itself with the policies of the Israeli government.”

The ruling was signed by Justice Tamar Bazak-Rappaport, daughter of retired Justice Yaakov Bazak and scion of a rabbinic family aligned with the ultra-Orthodox-nationalist community. Justice Minister Ayelet Shaked, as part of her judicial revolution, which she intended to continue had she been reelected, had tried on two separate occasions to have Bazak-Rappaport appointed to the Supreme Court.

Shaked's revolution has succeeded already, even though she will not see it through to her planned end. She implemented far-reaching changes to the Jerusalem District Court that effectively made it a means to circumvent the Supreme Court. Covered by an amendment to the Administrative Affairs Court Law, which Shaked advanced together with Betzalel Smotrich, her former colleague in HaBayit HaYehudi, Shaked lifted the Supreme Court’s authority over cases against groups or authorities operating in the West Bank, transferring them to the Jerusalem District Court. This includes cases and petitions filed by Palestinians whose privately owned lands on the West Bank are confiscated.

After the amended law passed on its first reading in May 2018, Shaked proudly announced, “The Knesset took a major step forward today in normalizing life in Judea and Samaria [the West Bank].” After the law passed its second and third readings in July 2018, Smotrich proclaimed, “Today marks the end of cases brought to the Supreme Court by Palestinians and groups on the far left against the settlement enterprise in Judea and Samaria.” Those cases did in fact end.

Unlike the commotion that inevitably surrounds the appointment of judges to the Supreme Court, judicial appointments to the Jerusalem District Court tend to fly under the radar. Haaretz conducted an investigation into the Jerusalem court in 2018 and found that not one of the court's 30 judges is an Arab. Over the past few years, Arab attorneys and judges who have sought appointment to the court have been consistently rejected. In contrast, Chaya Zandberg, who headed the Committee to Legalize Outposts and is considered close to Shaked, was promoted to a seat on the bench. Haaretz also found that some 40% of the court’s judges are religious, including the president of the district court, Aharon Farkash, and his deputy, Moshe Drori, who is known for his rulings against Palestinians and other minorities.

Evidence of Shaked’s revolution can also be seen in the controversial ruling by Justice Arnon Darel that legalized the Mitzpe Kramim outpost, which was built on privately held Palestinian land. In August 2018, Darel accepted the settlers’ claim that the land had been allotted to them in good faith. It would be no exaggeration to say that the same logic inherent among the new lineup of the Jerusalem District Court was behind Bazak-Rappaport’s ruling that Shakir, who works for a group that tracks the injustices of the occupation, should be deported.

Shaked will soon be leaving the Justice Ministry because her party, the New Right, did not surpass the vote threshold to enter the Knesset, but her legacy will remain within the walls of the Jerusalem District Court. Smotrich is one of the candidates to replace her, but it is doubtful that Prime Minister Benjamin Netanyahu would actually appoint him to the post. It is widely believed that the coveted portfolio will go to Yariv Levin, the current minister of tourism, who has made no secret of his plans to launch another revolution in the judicial system. He wants one even bigger than Shaked’s.

In an April 17 interview with the Ynet website, Levin claimed that Shaked had not gone far enough. “She certainly went in the right direction, but the situation today is even worse than it was four years ago,” Levin declared. According to him, that the Supreme Court can discuss and potentially repeal a Basic Law — which would require a special Knesset majority to be adopted — is unacceptable, which is why he intends to pass a law to circumvent the Supreme Court.

Levin was here referring to the right-wing battle for the adoption of the controversial Override Clause, which would allow the Knesset to approve laws rejected by the Court as unconstitutional. “Anyone who thinks that the Supreme Court should continue to function as it does today,” said Levin, “certainly has reason to be concerned about the appointment of a minister who wants to do things differently.”

In the course of the election campaign, Shaked pleaded with right-wing voters to give her enough votes to allow her to carry on with her work. That did not happen, but her supporters have no cause for concern. Levin has already declared his intent to wage a war to the bitter end against the current judicial system, and there is reason to believe that he is about to do just that. He will proceed with a severe and angry face and with the complete and total backing of Netanyahu.