An Israeli expert warns that the 100-day plan by Justice Minister Ayelet Shaked against the legal system resembles anti-democratic moves in Hungary and Poland: "If you want to look two steps ahead and see where they want to lead us and how we will appear to the world, look at those two states." 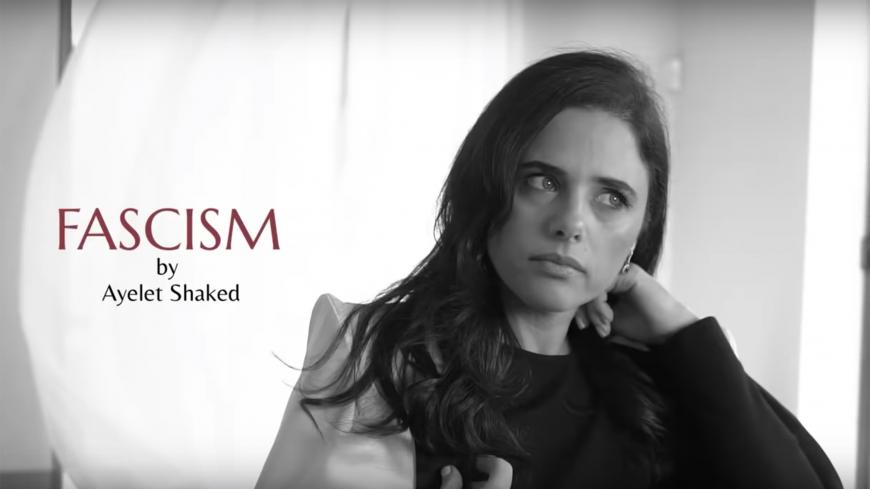 On March 18, Justice Minister Ayelet Shaked unveiled a “100-day plan” she intends to implement in the judicial system if and when she resumes her position after the April 9 elections. Shaked insists repeatedly that she has carried out a judicial revolution in recent years and that voters must allow her to continue her transformational reforms. The following day, her New Right party aired a video clip that immediately became the talk of the campaign. The black-and-white, slow-motion footage was meant to resemble typical perfume commercials, presenting Shaked as a model for a perfume called Fascism. With background piano music and close-ups of Shaked in provocative poses, she is heard whispering suggestively the words “judicial revolution,” “judicial appointments,” “curbing judicial activism,” “separation of powers,” “restraint of the Supreme Court" and, of course, “fascism.” The final frame has Shaked spraying herself with perfume, looking straight at the camera and saying, “To me, it smells like democracy."

The clip drew immediate global media attention. After all, it is not every day they see an Israeli government minister displaying herself as an attractive model. The Washington Post, for example, dubbed the mock campaign ad “bizarre,” saying it shows a member of a government often accused by its critics of fascism actually advertising fascism. The British Guardian reminded the minister that a host of laws she had championed emit a strong scent of fascism, such as the Nationality Law and the appointment of conservative judges she had engineered, and her repeated calls to rein in the judicial system that protects Israeli democracy. In other words, for critics of Israeli policies, Shaked’s “spoof” ad served as an admission of guilt — as if to say "even the justice minister no longer denies what we have been saying all along about Israel."

Israel media, however, focused mostly on the packaging rather than the content. Some argued the clip was sexist, objectifying the body of the attractive minister in the service of her party, which is behind in the polls. Others wondered whether the campaign managers had made a mistake with a mock ad somewhat inappropriate for voters of a conservative party, many of them religious Jews. However, the substance — though hardly addressed — is far more troubling.

“Shaked will overcome the Supreme Court; Bennett will defeat Hamas” is the newly minted campaign slogan of the New Right party led by Shaked and Education Minister Naftali Bennett.

Just so. In other words, the right-wing movement equates the country’s top court with a bitter enemy such as the terror organization in Gaza that must be vanquished.

In presenting her plan — this time without the romantic background music and throaty whispers — Shaked openly argued that the Supreme Court had “carried out a coup so that democratic elections have become almost meaningless.” She deliberately made threatening use of the word “coup” as though talking about the military coup of Hamas in Gaza. She then claimed with an undertone of contempt, “The people have been replaced by an enlightened public,” and listed one by one the targets she planned to eliminate in order to thwart the overthrow by the elites. One of them, the Judicial Appointments Committee, will no longer be authorized to appoint the country’s chief justices. Shaked would like them appointed instead according to their political views; they would be auditioned before being appointed.

Shaked went even further than leaders of the ultra-nationalist Otzma Yehudit (Jewish Power) party, Itamar Ben-Gvir and Michael Ben Ari. On March 17, the Supreme Court disqualified Ben Ari’s candidacy for the Knesset due to his racist pronouncements, but even his party does not advocate abolishing the committee that appoints the justices, only having a say in the nomination process. Netanyahu has reportedly promised to accede to the demands by these disciples of ultra-radical Rabbi Meir Kahane for seats on the Judicial Appointments Committee.

As part of her plan, Shaked also promises to push through legislation granting lawmakers the power to legislate laws overturned by the top court (the Override Clause) and to ensure passage of a law authorizing politicians to pick and appoint the attorney general and the legal advisers of government ministries. In October 2018, Deputy Attorney General Dina Zilber harshly criticized this proposed law, telling a Knesset panel, “We are being asked to choose between loyalty and commitment to the rule of law. Loyalty in the media, loyalty in culture and now loyalty in law." She was referring to various government initiatives to defund institutions that fail a test of loyalty to the state.

Roi Peled, an expert on administrative and constitutional law and lecturer at the College of Management Academic Studies, told Al-Monitor that the program Shaked presented, along with the anti-democratic legislation adopted in the past Knesset, is directly reminiscent of trends in Poland and Hungary. “If you want to look two steps ahead and see where they want to lead us and how we will appear to the world, look at those two states,” he said. Hardly anyone considers them democracies rather viewing them as verging on dictatorships, Peled added.

Shaked’s 100-day blueprint is designed to pave the way for a radical right-wing revolution her party is planning after the elections, in direct correlation with her and Bennett’s unambiguous declarations about territorial annexation of parts of the West Bank and curbs on the Supreme Court’s powers. Shaked has already transferred the top court’s authority to adjudicate in Palestinian petitions against the appropriation of their lands from the purview of the Supreme Court to the Jerusalem District Court. At the same time, she did all in her power to change the makeup of the Jerusalem District Court to prevent rulings in favor of the Palestinians. She was successful in this regard. In August 2018, the court ruled on a petition by the West Bank settlement of Mitzpe Kramim, saying an illegal outpost built on private Palestinian land could be legalized if the land was allocated “in good faith." Peled said that Shaked’s judicial revolution is designed to remove the obstacles that could hamper the right in carrying out its declared grand plan against the Palestinians and Israel’s Arab citizens.

Indeed, Shaked’s Fascism fragrance is intended to disguise the smell of annexation and control of private Palestinian land and of Israel’s morphing into a state with exclusive rights for Jews, as already enshrined last year in the Nationality Law. That is the New Right’s motto.

Shaked branded her perfume Fascism — and rightly so.