Even pro-settlement Israeli parties give up fighting for Amona settlers

Politicians on the Israeli right appear to see the writing on the Supreme Court wall and have abandoned the battle over dismantling the West Bank outpost of Amona. 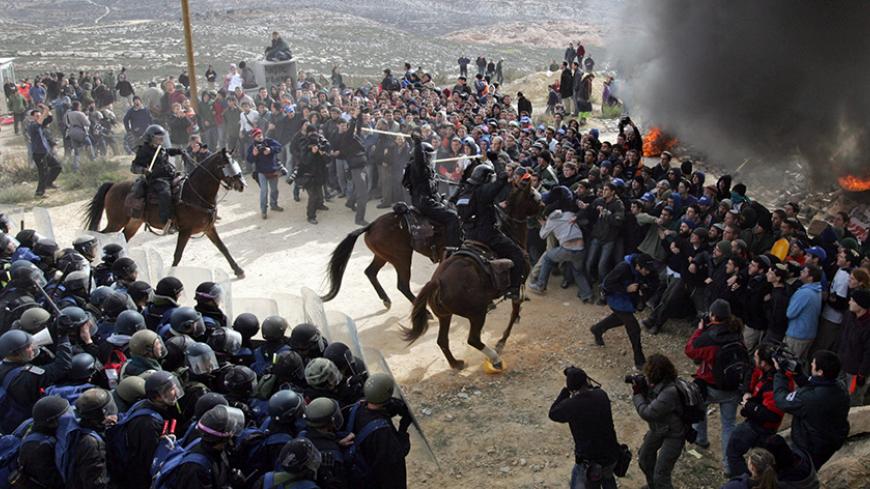 Israeli police clash with Jewish settlers at a burning barricade in the unauthorized outpost of Amona, close to the West Bank Jewish settlement of Ofra, Feb. 1, 2006. - REUTERS/Oleg Popov

Judging by the poor attendance of senior Likud officials at the Sept. 12 emergency meeting to save the West Bank outpost of Amona, the ruling party has no intention of sacrificing much to prevent the evacuation of the outpost illegally established on Palestinian-owned land.

The most senior participant at the gathering was Deputy Foreign Minister Tzipi Hotovely, who is linked with the settler movement. She was joined on stage by three Likud backbenchers: Oren Hazan, Amir Ohana and Yehuda Glick. Science Minister Ofir Akunis sent a supportive video message that Amona promptly posted on Facebook, but that just about sums up the party’s support at the gathering.

According to a 2014 Supreme Court ruling, the 50 families living in Amona will have to evacuate their homes by the end of 2016, since the houses were built on privately held Palestinian land and the current residents failed to produce documents proving that the land had been purchased. As the implementation of the ruling approaches, political tensions are rising, with settlers looking to the right-wing parties in the coalition — the Likud, HaBayit HaYehudi and Yisrael Beitenu — to save them. Over the past few weeks, the staff overseeing the struggle to prevent the evacuation of Amona went into high gear, applying all the pressure they can muster on Knesset members to prevent the dismantling of the outpost.

The struggle, however, has failed to gain momentum. Based on the responses of Knesset members and ministers on the right, it does not look like the fate of Amona will be cause to dismantle the government, a conclusion that runs counter to prior assessments within the political system.

Yesh Atid chair Yair Lapid believed with all his heart that the evacuation of Amona was a hurdle that this government would not pass, and that it would eventually lead to early elections. Lapid was so sure that he called Amona a “political turning point” in all of his briefings to journalists. Meanwhile, however, his ally in the fight against Prime Minister Benjamin Netanyahu, Avigdor Liberman, has since joined the government and assumed the position of defense minister. As a result, Lapid was forced to shelve his hopes for early elections, at least at this stage.

Liberman astounded the right on Sept. 12, while the Amona emergency meeting was taking place. He told a group of students in a meeting in the Ariel settlement that the Supreme Court’s decision to evacuate the settlement must be respected. The defense minister was quite clear when he said, “Given the Supreme Court ruling, there is no chance of leaving Amona where it is today, because most of its homes are built on privately owned Palestinian land. The law enforced in Amona will be the same for everyone. We will also respect the Supreme Court’s ruling with regard to the Palestinian trespassers in Susya, because we are a state that follows the rule of law.”

Those fighting to prevent the evacuation of Amona were quick to attack the defense minister, who lives in Nokdim, in the Etzion settlement bloc. In a statement, they accused Liberman of “raising a white flag of surrender to the radical left and the Palestinian Authority, who are exploiting the Israeli legal system to fulfill their goal of destroying the Jewish settlement enterprise in Judea and Samaria.”

Interviewed by Army Radio, head of the Amona campaign Avichai Buaron accused Liberman of using legal excuses to justify the evacuation. He said, "It's not a legal problem, but a diplomatic one — if Jews will live in Judea and Samaria or not. Presenting this as a legal problem suits the defense minister. By turning it into a legal issue and deferring to the Supreme Court ruling, he is covering up his and the prime minister's conduct on this issue."

Liberman’s statement was in fact a turning point in the struggle over Amona. The settlers are beginning to realize that they don’t have much strength to maneuver politically within the current coalition after all, even though the government is the most right-wing that could be formed by the factions in this Knesset.

When the Amona campaign was set up a few months ago, its leaders believed that with a right-wing government on their side, they could stop what they perceive as the expulsion of Jews from their homes. Several ministers and Knesset members were invited and came to visit Amona — not just members of HaBayit HaYehudi, but also Likud's Knesset speaker Yuli Edelstein and ministers Yariv Levin and Ofir Akunis. Yet as the deadline for the evacuation approached, the settlers realized that those lobbying for them within the government won't take it so far as to lose power.

The settlers were left to remember the political struggle against the 2005 disengagement from Gaza. That struggle failed and brought about the dismantling of Prime Minister Ariel Sharon's government.

Avenging the rebellion within the Likud, Sharon founded Kadima, thus traumatizing the Likud, which lost its ruling status. Compared with Amona, the Gaza disengagement was a much more serious matter — the evacuation of thousands of settlers sent there by the government. This time around, the Likud has no intention of risking its position.

With the Likud’s ministers and the prime minister’s office refusing to stand at the forefront of the struggle and the defense minister backing the Supreme Court’s decision, the only party left for the settlers to turn to is HaBayit HaYehudi. That party is considered the settlers’ representative, and they are the basis of its strength. On the other hand, even there, the two most senior and influential figures, Education Minister Naftali Bennett and the No. 2 person on the list, Justice Minister Ayelet Shaked, are not at all eager to join the fracas.

While touring Mount Hebron this week, Shaked announced that she supports the solution proposed by State Attorney General Avichai Mandelblit. He suggested that the government adopt a plan by which Amona is removed from its current location and its 50 homes relocated to a nearby settlement.

Bennett also sounds reluctant to fight the Supreme Court decision. When he told Channel 7 that the plan to relocate Amona is acceptable to him, he left quite a few settlers disappointed.

A senior Likud minister told Al-Monitor on condition of anonymity, "This government won't be dismantled over Amona. It is no coincidence that neither Bennett nor Shaked are hardly at the forefront of this battle. They are not interested in blowing up [the coalition] over this, even though they might be acting against their voters' sentiments. They know that this is not about a diplomatic plan for evacuation, but a decision by the Supreme Court. They realize that they cannot break it all up over that. We might have a tactical crisis over this, but nothing more."