Before, during and after the evacuation of the illegal Amona outpost, Prime Minister Benjamin Netanyahu and his ministers groveled to the right-wing factions of the settler movement. 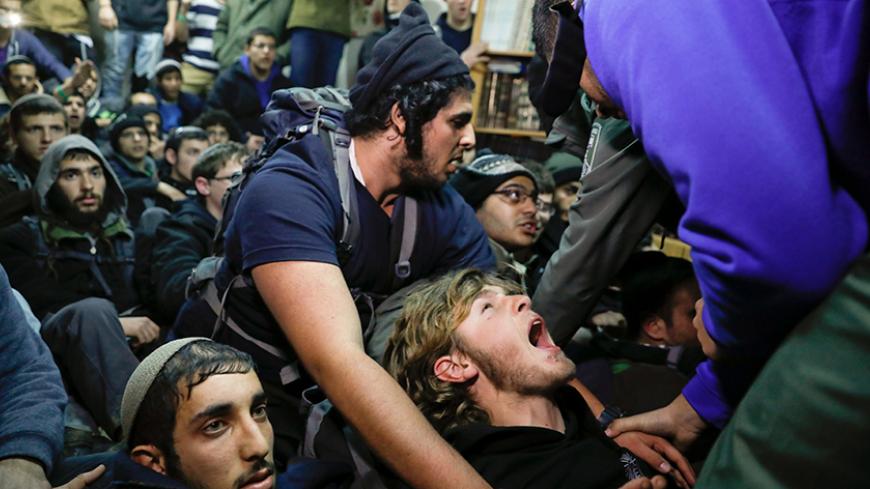 Israeli policemen try to remove pro-settlement activists from a house during an operation by Israeli forces to evict settlers from the illegal outpost of Amona, West Bank, Feb. 1, 2017. - REUTERS/Ronen Zvulun

During the late afternoon of Feb. 2, as harsh images of the violent evictions from the Amona outpost and reports of wounded police officers flooded the media, Prime Minister Benjamin Netanyahu delivered a speech in the West Bank settlement of Ariel, at a memorial for Ron Nahman, the town’s former mayor. Having avoided the Amona eviction for a few weeks, Netanyahu took advantage of the forum to talk about it. During the eviction, activists threw cleaning liquids, acid, oil and glass bottles at the police, but anyone expecting to hear Netanyahu disavow their shameful actions, never mind condemn them, was soon disappointed.

His statements practically ignored that the 40 families evicted had built their homes on privately owned Palestinian land and that the Supreme Court had ordered their removal four years ago, in 2013. Netanyahu preferred instead to share in the “great pain of the families that were forced to leave their homes, that actually had to abandon their life’s work.” There was not a single word about how this “life’s work” was predicated on squatting on private property and systematically ignoring a court ruling. Netanyahu sounded like he was groveling before the Amona settlers when he promised that his government would compensate them as soon as possible by establishing a “new settlement on state land” to replace their illegal outpost.

The majority of the violent people who fortified themselves in Amona’s synagogue and injured 60 police officers were young, far-right extremists from outside the settlement who arrived with the sole intent of interfering with the eviction order. Nevertheless, it is impossible to ignore the responsibility that Amona’s residents bore for the incident.

Had the Amona settlers chosen to, they could have prevented the flood of extremists to the outpost long before the eviction occurred. They could have denied access to the settlement to anyone they deemed problematic. They could have helped to ensure that the eviction was carried out peacefully, but this is theater of the absurd, and Netanyahu’s right-wing government is a key player. The residents of Amona played the role of national heroes, rather than that of criminals who broke the law and violated a Supreme Court order. The eviction took place after a decade of grueling legal battles and four years after the state was ordered to demolish the homes built in Amona.

Over the past few months, countless efforts were made to postpone the inevitable, all with the support of the right-wing government. It sought convoluted formulas to approve the “theft of land,” culminating in proposing the so-called Regularization Law legalizing illegal settlements, even though Attorney General Avichai Mandelblit announced that he would not be able to defend the proposed legislation before the Supreme Court. Nevertheless, the government continued to promote the bill, which is expected to be brought up in the Knesset for second and third votes in mid-February. The measure is too late to save Amona, but it is intended to save all future Amonas.

The prime minister’s compensation package contains more than just a green light for the regularization bill and a promise to build a new settlement for the evicted Amona settlers. It also comes with a promise to build 3,000 housing units on the West Bank, approved by Netanyahu and Defense Minister Avigdor Liberman a day before the eviction.

Everything about the conduct of the right’s Knesset members and ministers before, during and after the eviction has been despicable. The settlers are proving that they actually run the government, while top members of the coalition compete among themselves over who can ingratiate themselves the most to the far right and atone for the “sin” of Amona. In their comments this week, the ministers sounded like they were apologizing for being forced by the Supreme Court to obey the law. Everywhere they went, they scattered promises that they would be the ones to promote more construction in the West Bank.

So, for example, on the morning of Feb. 1, Science Minister Ofir Akunis published a moving Facebook post in which he poured his heart out to the Amona settlers. Akunis wrote, “This is a hard day for every Israeli who loves his country, but this is an even harder day for those 40 precious families, the men and women living in Amona, who were forced to see their homes demolished. Their life’s work, their home of the past 20 years, destroyed.”

Like Netanyahu and other right-wing ministers, Akunis has conducted himself over the last few days as if he were controlled by the most extreme groups in the settler movement. They all sounded like they were competing among themselves to grovel before the people of Amona and the settlers in general. Obviously, one can express empathy for someone whose home has been destroyed. On the other hand, Amona's residents were not like the residents of Yamit in the Sinai Peninsula or Gush Katif in the Gaza Strip who were sent by the state to settle these particular pieces of land, but were later removed by the state and saw their life’s work destroyed in the service of diplomatic and defense decisions, that is, the peace agreement with Egypt and the 2005 Gaza disengagement.

In this mood, Environmental Protection Minister Ze’ev Elkin sounded especially apologetic. In an interview with Army Radio after the eviction, he said, “This is a very painful and difficult day. The first thing we have to do is look the people of Amona directly in the eye and take responsibility for what happened. We have to say that we failed here in our efforts to defend the settlement. There can be no doubt that in terms of the results, we failed the people of Amona.”

Elkin's comment is an accurate expression of the confused mood that has become so pervasive. A senior Israeli minister actually apologized to the settlers for evicting them from homes built on privately owned Palestinian land. What exactly is the meaning of his statement that “We have failed in our efforts to defend the settlement”? How exactly did Elkin and his colleagues think they would defend the crime?

Elkin is a seasoned politician. It is almost certain he knew that there was no way to prevent carrying out the eviction order. Nevertheless, he insisted for months on sowing false hopes and illusions among the settlers. He preferred to toss the hot potato over to the Supreme Court, which is already accused of having left-wing inclinations.

One surprising participant in the flattery fest was Housing Minister Yoav Galant of Kulanu, considered the sane, centrist partner in the coalition. Galant, a general in the reserves, has recently been drawing closer to the Likud. On Feb. 2, he announced that he approved the immediate marketing of some 2,000 housing units in the West Bank and added, “There is no more symbolic day to promote the momentum of construction in Judea and Samaria than the day that Amona was evacuated.” Is that so?

Contrary to Galant’s comments, the tail wagging the dog fits the current situation perfectly — senior Cabinet members showing weakness and ignoring the law out of fear of the far right’s capacity for vengeance at the ballot box.