Palestinians fear that Israel will destroy Palestinian homes, lift the construction freeze and resume work on hundreds of new settlement housing units to compensate the settlers for the evacuation of Amona. 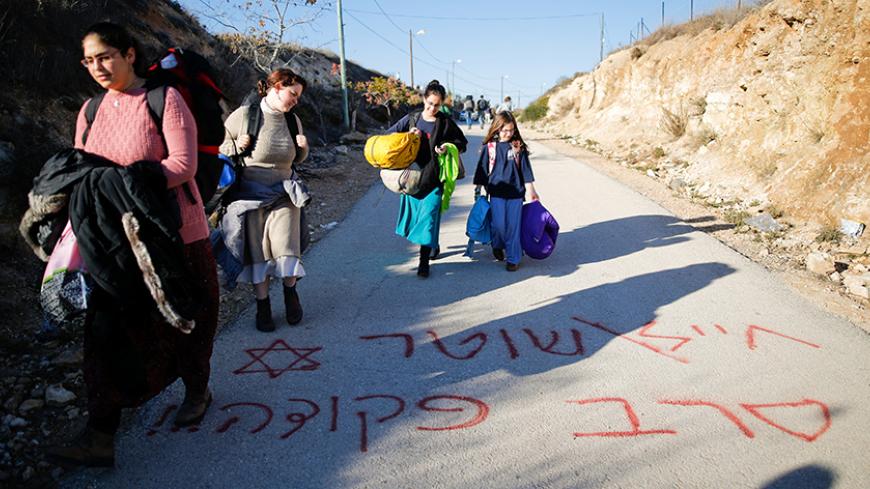 Israeli teenagers walk on graffiti written in Hebrew that reads "Soldier, policeman: refuse orders" as they prepare for an expected eviction of the Jewish settlement outpost of Amona, West Bank, Dec. 9, 2016. - REUTERS/Amir Cohen

The Israeli government returned to the Supreme Court Dec. 11 to request yet again that it postpone the evacuation of the unauthorized outpost of Amona (scheduled for Dec. 25 at the latest) by one month. The court rejected earlier requests, saying that the state had had plenty of time to prepare for and fulfill the court’s ruling made two years ago.

The settlement itself is already preparing for the evacuation. Hundreds of young people arrived there over the weekend, turning the evacuation into a mass event.

“The whole region is seething,” Salim Abu Qas told Al-Monitor. Abu Qas is a resident of the village of Ein Yabrud, right next to Amona. “Hundreds of settlers have been coming here, and we’re concerned.” He said that these days, residents of the nearby Palestinian villages try not to wander around the area too much.

The Palestinians are concerned about more than just violent clashes with settlers preparing for the evacuation. Citing past experience, they anticipate the government taking steps to appease the settlers after the evacuation by starting to demolish Palestinian homes in the West Bank's Area C and in Palestinian neighborhoods in East Jerusalem. Qadura Fares, a senior Fatah member in the West Bank, told Al-Monitor that there is a familiar ritual. Whenever there is tension between the settlers and the Israeli authorities, Prime Minister Benjamin Netanyahu rushes to “compensate” the settlers.

“You’ve become a settler state. They decide how all of you live,” said Fares. “Ever since the debate began over the evacuation of the families living in Amona, the Civil Administration has increased the rate at which it demolished homes in Area C. We are sure that once the evacuation is over, it will want to make it up to them and alleviate their anger, so it will turn the spotlight on us instead. We’re the ones who will feel the brunt of Netanyahu’s hard hand.”

It is hard to tell if this pessimistic prediction is likely. If, however, we have learned anything in these last few years, it is that in the race between Netanyahu and HaBayit HaYehudi chairman Naftali Bennett to win the hearts of the settlers, the prime minister will try to show that he is their most loyal and effective representative. The government is already following Netanyahu’s instructions to approve an extensive compensation package for families living in Amona. It is worth remembering that the unauthorized outpost was set up near water tanks belonging to the Israeli Mekorot water company by bringing in first one and then an entire camp of trailers. Residents of the settlement of Ofra left the confines of their own settlement to move into the trailers in a move to expand the territory under their control. None of these settlers paid any money for the land. Nor did they pay for the trailers, which were purchased by the World Zionist Organization’s Settlement Division and were parked on privately owned Palestinian land.

Fares notes that even after the Supreme Court ordered Israel to destroy the Ulpana neighborhood built on privately owned Palestinian land adjacent to the Beit El settlement, Israel did what he called “somersaults in the air to compensate the settlers and to appease them," adding, "That is the pattern. That is the way Netanyahu has acted all of these years." At that time, in July 2015, right after the implementation of the Supreme Court’s ruling, Netanyahu ordered the construction of 300 new housing units in another part of the settlement to replace those that were demolished. He even instructed Israeli forces to try to dismantle the unauthorized buildings stone by stone (instead of using bulldozers), at a cost of tens of millions of shekels. He was worried that images of the destruction of these buildings would offend the settlers and be harmful to his image.

This “gentle dismantling” operation never actually took place, because it was impossible from an operational perspective. On the other hand, Palestinians say that that same week, IDF bulldozers destroyed dozens of unauthorized buildings in Palestinian settlements adjacent to Beit El. According to Fares, it is believed that the Netanyahu government will lift the freeze on settlement construction of hundreds of new housing units to prove to the settlers that the evacuation of Amona was worthwhile. “Look, they may be evacuating Amona, but they are whitewashing all the other illegal settlements,” said Fares.

In a conversation with Al-Monitor, Riyad Najar, the head of the village council of Burin, which lies next to Beit El, confirmed that once the Ulpana neighborhood of Beit El was demolished, there was a series of what he calls “retaliatory actions,” in which Palestinian homes in his village and other nearby villages were destroyed. “It is a well-known pattern of behavior. It happens again and again,” said Najar.

But the main concern of Palestinians living in Area C is not limited to the construction of Jewish homes or the demolition of Palestinian ones. “Whenever there is tension with settlers, there is a huge increase in the number of ‘price tag’ activities,” Abu Qas told Al-Monitor. He was referring to acts of vandalism and violence by extreme right Jews against Muslims and Christians.

According to him, people living in Palestinian villages near Amona have suffered years of repeated attacks by settlers. These attacks, he notes, are now reaching record highs. “What you have to know is that generally, the most extreme settlers go to the illegal outposts, including Amona,” Abu Qas explained. “Whenever they see Palestinian property, they think of it as something they can destroy. They damage vehicles, they throw stones and they uproot trees. They consider us the reason they cannot expand and take over the entire territory. We are certain that there will be ‘price tag’ attacks.”

Abu Qas went on to say that Palestinians have formed their own "civil guard units" to patrol the territory at night and prevent settler attacks. They have not forgotten how the home of the Dawabsha family in the village of Douma was burned down in July 2015, burning three people, including a toddler, to death and leaving a 4-year-old severely injured. “But if we do run into armed settlers, we don’t have too many tools to fight back. They are usually protected by the army, so there’s not a lot we can do,” he said.