Netanyahu, Bennett square off over settlers 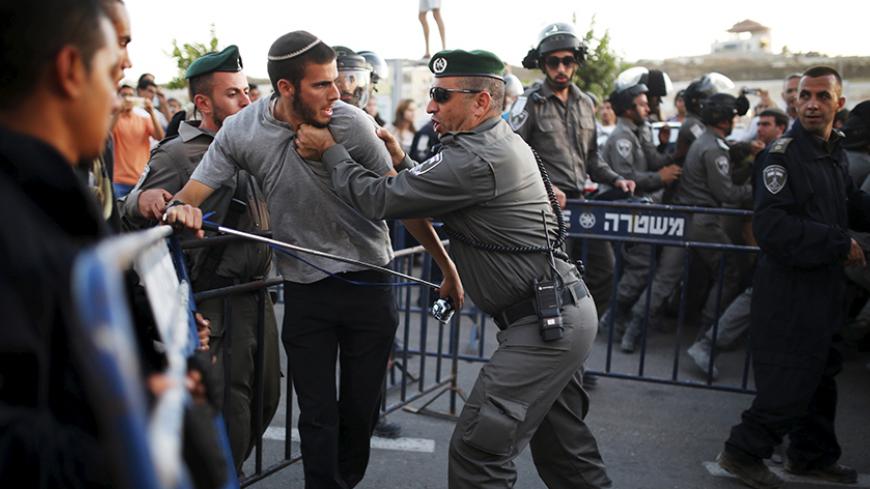 Aug. 15 will mark the 10th anniversary of the disengagement, Israel’s unilateral withdrawal from the Gaza Strip, including the evacuation of 21 settlements and four additional settlements in northern Samaria in 2005. Then-Prime Minister Ariel Sharon, the “father of the settlements,” shocked the world — and himself — in 2004 when he announced his intent to evacuate the Israel Defense Forces' bases and dismantle all Israeli settlements in the Gaza Strip. No one believed him at first. Sharon? The very man who dropped settlements on every hill in Judea and Samaria? The same man who invented the system of putting up scattered outposts throughout the entire area, and who declared that “Netzarim was the same as Tel Aviv?”

But Sharon was serious. The "Bulldozer" who built the settlements became the "Steamroller" who tore them down. Within just a few months, the settlers realized that their father and founder had risen to destroy them. They also knew that he was the only one in any way capable of doing a thing like that. Only he had the necessary inner strength, the determined sense of leadership and the requisite self-confidence. Only he could turn on his life's work, rip up 25 thriving settlements and impose the hegemony of the Israeli kingdom on its insurgent representatives.

Sharon implemented the disengagement over eight days in August 2005. It went faster and was easier than originally thought. Though tens of thousands of national-religious young people gathered across the Gaza Strip to foil the decree, they ultimately failed. Israel withdrew from Gaza. It evacuated every last inch of territory and re-stationed itself along the familiar, internationally recognized Green Line.

A few months later, in January 2006, Sharon suffered a massive stroke and went into a coma from which he would never recover. Ehud Olmert succeeded him as prime minister and engaged in a last heroic attempt by the Israeli state to attain peace with the Palestinians. The effort collapsed when Palestinian President Mahmoud Abbas didn’t bother to respond to the generous peace proposal that Olmert offered during his final days in office.

In 2009, Benjamin Netanyahu came to power in Israel and has barricaded himself there ever since. Netanyahu’s current government is the most right-wing that he has formed yet. The Israeli peace camp collapsed. The consensus dominating Israel’s agenda is that the disengagement was a complete failure, that Abbas is not a peace partner and that it is necessary to learn the lessons of the disengagement, which turned the Gaza Strip into "Hamastan."

This week, on the night of July 27, over 200 settlers showed up at the site of Sa-Nur in northern Samaria, one of the four settlements dismantled there during the disengagement. They symbolically re-established the settlement and barricaded themselves in an old British fort overlooking the territory. The group included members of families that were evacuated from there a decade ago, backed up by Bezalel Smotrich, a Knesset member from HaBayit HaYehudi, and Aryeh Eldad, a former Knesset member from the far right who barricaded himself in that same tower 10 years earlier. The IDF will evict the settlers in Sa-Nur later this week.

On that same night, the IDF, backed up by dozens of border police officers, seized two vacant apartment blocks on the edge of the West Bank settlement of Beit El. The buildings, known as the “Dreinoff neighborhood,” were slated for demolition by the Supreme Court, because they were built on privately owned Palestinian land, and because their construction involved serious building violations. The struggle over these two buildings has kept the settlers, security forces and the Israeli political system busy for many long months.

On the morning of July 29, as this article was being written, the Supreme Court issued another, final ruling, ordering the buildings’ demolition. Indeed, the demolition started before noon. It should have been an event of marginal interest at best, but it turned into a minor coalition crisis, sending a jolt through the Netanyahu government and the Israeli right. The leaders of HaBayit HaYehudi, Education Minister Naftali Bennett and Justice Minister Ayelet Shaked, have opened a new front against Defense Minister Moshe Ya’alon, who insists that the Supreme Court’s orders be fulfilled to the letter. They are also fighting Netanyahu, who is backing Ya’alon, even if he has abandoned him to face the settlers’ heavy fire almost on his own.

Ostensibly, this fight was over two buildings in one settlement and a symbolic attempt to re-establish a presence in another dismantled settlement. In fact, it is much more significant than that. The settlers swore that the disengagement would never be repeated. They decided to launch an attack on every act reminiscent of it, and to turn it into a kind of modern-day Masada. Even the biggest critics of the disengagement realize that it provides historic and operational proof that if Israel wants to, it really can evacuate settlements. The current struggle is over this narrative. The settlers want to ensure that the evacuation of settlements, which they consider a serious mistake, is never repeated. That is why they dive right into the fight whenever the state is forced to remove an illegal building in the territories.

In this strange state of affairs, Netanyahu and Ya’alon, two predatory right-wing hawks, are depicted as some kind of leftist traitors and collaborators with the Palestinians by the far right, represented by Bennett. At the same time, Knesset members from the most bellicose wing of HaBayit HaYehudi are fighting against the Supreme Court itself, calling for it to be bulldozed. While this kind of chaos is characteristic of the Israeli political system, it seems that it is not enough to shake up Netanyahu’s coalition, at least at this point. It is a struggle for a place beneath the proverbial basket, a fight over the narrative and a means of achieving deterrence.

Bennett and his people are sending two signals. The first is to indicate that a second disengagement is impossible. The second is to remind those settlers who abandoned Bennett in droves right before the last election by voting for Netanyahu who the real patron of Jewish settlement in Judea and Samaria is, and who will blink at the last moment. In other words, the battle is over political goods on one hand and the historical narrative on the other.

In the background, the historic debate over the disengagement itself has been taking place. These days, it is hard to find defenders of the disengagement in the Israeli public sphere, and this is perfectly understandable. Israel evacuated the territory in exchange for a terrorist enterprise, rockets and Hamas tunnels. And the monster has been growing stronger at a horrific pace. The disengagement was a failed experiment that resulted in a twofold tragedy.

The first tragedy is operational: Hamas emerged as a rival that can send Tel Aviv's population scurrying to their bomb shelters, meaning that each round of fighting against Hamas becomes more bitter and bloodier than the preceding round. The second tragedy is the irreparable damage that has been done to the peace process and the last of its supporters in Israel. If Sharon had the good sense to implement the disengagement as part of genuine negotiations with Abbas, and to evacuate the settlements gradually, with each evacuation conditional on it being followed by the rehabilitation of a refugee camp, the disengagement could have become a real impetus for peace. Hamas would not have come to power in Gaza, and the future could have been different for both people. But Sharon was determined to do everything unilaterally and to toss the keys to Gaza into the sea. However, since then the sea has become stormy and threatens today to drown us all.