Settlers are now demanding to cancel the disengagement out of four West Bank settlements destroyed in the framework of the 2005 Gaza withdrawal. 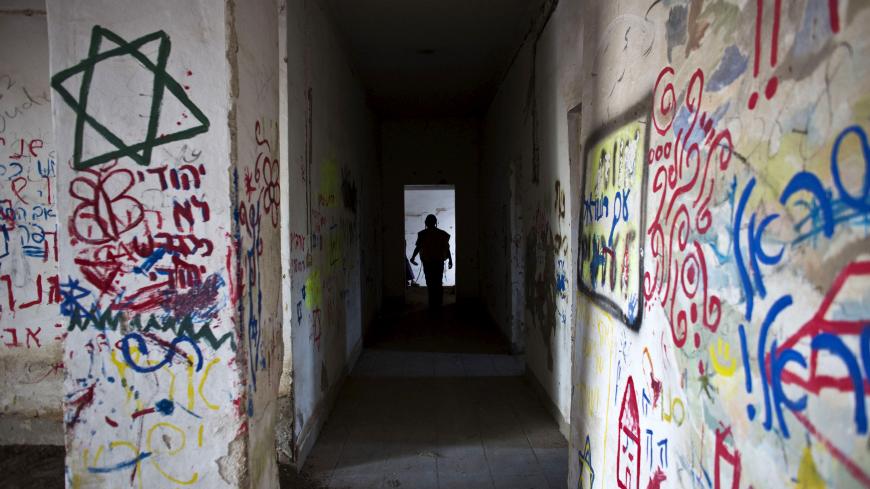 A protester walks along a corridor of an abandoned building at the evacuated settlement of Sa-Nur, West Bank, July 28, 2015. - REUTERS/Nir Elias

“Thirteen years since the expulsion, 13 years of complete darkness in the razed Jewish settlements of Homesh, Sa-Nur and Kadim. Tonight, we turn on the light in Sa-Nur once again. We say: This place still belongs to us, we are committed to this place and to all the area around it.” This impassioned speech was delivered by Knesset member Shuli Moalem-Refaeli of HaBayit HaYehudi, on the ruins of the West Bank Sa-Nur settlement that Israel demolished in 2005. Sa-Nur was demolished as part of the 2005 disengagement from Gaza, which included the disengagement from four West Bank (north Samaria) settlements. Some 200 former residents of Sa-Nur joined Moalem-Refaeli, arriving at the site under cover of darkness on July 24.

Moalem-Refaeli explained that Sa-Nur was chosen for the symbolic event because it was the farthest and least accessible of the four destroyed settlements. The effort to get there illustrates the settlers’ determination to resettle this land, she explained.

HaBayit HaYehudi lawmakers are hoping to nullify the 2005 Disengagement Law, the legal framework for the evacuation of Jewish settlements, also called the eviction-compensation law. The bill set out the compensation to those evicted from their homes and banned them from returning to the area, which was declared a closed military zone. The settlers who took part in the recent protest at Sa-Nur thus violated the law, with the support of Knesset members Moalem-Refaeli and Bezalel Smotrich.

Opposition Knesset member Saleh Saad, from the Zionist Camp faction, urged the Knesset Ethics Committee to punish the lawmakers who violated the law and caused 200 extreme right activists to do so as well. Anyone violating the law should be jailed for two years, he said, adding, “We are at a time of heightened security sensitivity, and such action could ignite a clash that would endanger many lives.” Smotrich responded derisively, “I’ve already spoken with my brother who lived in Sa-Nur and he promised to have Knesset member Saad over for coffee at his home once we return there.” The return to Sa-Nur, Smotrich added, “will be the first step toward our return to the settlements of the Katif bloc,” as the 21 Israeli settlements in Gaza were collectively called.

The settlers have launched a campaign in the Knesset and elsewhere to annul the Disengagement Law and rectify what they describe as a “historic injustice.” They have brought around two government ministers from the ruling Likud party, Knesset members Gila Gamliel and Haim Katz, and hope to mobilize the entire Likud party for what they have designated as a top national priority. The settlers are also trying to generate public pressure on Likud leader and Prime Minister Benjamin Netanyahu. Social Equality Minister Gamliel termed the 2005 withdrawal “a tragedy” and appealed directly to Netanyahu: “We, as a national government, must pass a law annulling the disengagement from northern Samaria.” She defined the resettlement of the vacated communities as a national priority that the government and the Likud movement must implement.

Yossi Dagan, the head of the Samaria Council and a former Sa-Nur resident, claimed that most Likud lawmakers support an annulment, adding that the settlers would not give up until the Israeli flag flies over these settlements once more.

In 2005, Prime Minister Ariel Sharon focused his withdrawal plan on an Israeli pullout from Gaza, but he also decided to evacuate four West Bank settlements in order to placate the administration of US President George W. Bush. He hoped that by doing so he would ward off implementation of the American road map for peace in the Middle East designed to culminate in the establishment of a Palestinian state in the West Bank. Sharon initiated the disengagement from Gaza in order to save almost all of the settlements in the West Bank. For the sake of that far larger goal, Sharon added the four small settlements in northern Samaria to show the Bush administration that Israel intended to focus on building West Bank settlement blocs rather than dispersed distant communities. The settlers of northern Samaria went quietly at the time, virtually without opposition. Most eyes were on the Gaza Strip Katif bloc, specifically on Kfar Darom, where settlers mounted a violent protest against their eviction.

What moved the settlers to renew their protest and demand a return to the Samaria settlements now, 13 years after the withdrawal? Activists at the campaign operations center told Al-Monitor that the desire to return to the homes from which they were uprooted never abated and claimed the protest had never stopped. This, however, is not exact. The operations center started its activity and the mobilization of lawmakers on the right only recently, sensing that in the prevailing political climate they could effect change in the law. They have also been encouraged to believe their goal is feasible by the supportive policy of the Trump administration, which has displayed a forgiving attitude toward continued Jewish settlement in the West Bank and the freeze in peace negotiations with the Palestinians. Pressure on the prime minister is thus expected to increase.

Netanyahu has proven vulnerable to heavy pressure by the settlers in the past, easily giving in to their demands. He is familiar with their current demand to return to Sa-Nur and the three other razed settlements. In early May, he met in his office with leaders of their campaign. He listened but did not make any promises.

The activists know Netanyahu well. They believe the prime minister is awaiting the right moment to accede to their demand, which has been gaining traction not only on the radical political right but also among many in his Likud party. There are numerous examples of such surrender on his part. In June 2017, Netanyahu announced his intention to push forward with construction of 300 housing units in the West Bank settlement of Beit El. Initially, he actually rejected the plan for fear of angering the US administration by expanding Beit El. However, after the settlers mounted protests, erecting a tent near his Jerusalem office, mobilizing HaBayit HaYehudi Chairman Naftali Bennett and former Likud minister Gideon Saar, Netanyahu folded and informed the head of the local Alon Council with great fanfare that he was agreeing to the demands.

Netanyahu also generally announces new construction in the West Bank after terror attacks against Israeli settlers. During the wave of terrorism that broke out in October 2015, Netanyahu and Defense Minister Avigdor Liberman approved construction of hundreds of housing units as a salve to the settlers.

Will the evacuees of northern Samaria return to the settlements they vacated? Based on current government policy, it’s safe to assume that the answer is “yes.” It will happen when Netanyahu can present his decision as a reaction to Palestinian terrorism rather than as an Israeli initiative.