The family of Sgt. Elor Azaria was hoping that a populist right-wing campaign in support of their son would save him from conviction over the fatal shooting of a wounded Palestinian assailant. 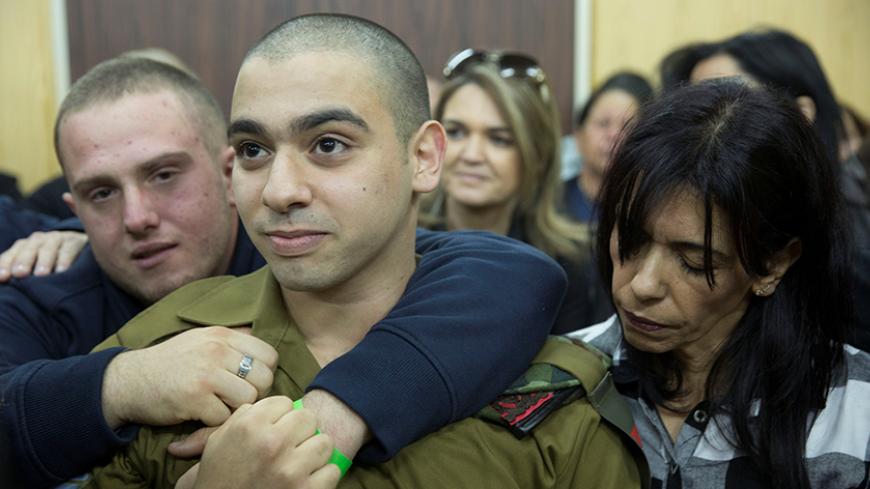 Israeli soldier Elor Azaria, who is charged with manslaughter by the Israeli military, sits to hear his verdict in a military court in Tel Aviv, Jan. 4, 2017. - REUTERS/Heidi Levine

The Elor Azaria affair, in which an Israel Defense Forces (IDF) soldier shot an incapacitated terrorist, was the catalyst for Avigdor Liberman’s appointment as defense minister last May. His predecessor, former Chief of Staff Moshe Ya'alon, resigned due to a confrontation with the prime minister on the subject. Ya'alon had adopted a strong judgmental line against Azaria and called him "a soldier who has gone astray" shortly after the incident. That statement cost Ya'alon his job.

Just prior to his rather surprising appointment, Yisrael Beitenu chairman Liberman had managed to take the reins of the public struggle for Azaria's exoneration. He appeared in discussions in the military court, kept contact with the family and expressed confidence that the soldier would be found innocent. But Liberman's entry to the Defense Ministry decreased his involvement in the affair to the point of a full turnabout. When the military court convicted Azaria of manslaughter on Jan. 4, Liberman completed his changeover. The defense minister adopted the pose of a responsible leader who gives support and backing to the military and its commanders. Liberman even labeled right-wing politicians who expressed support for Azaria as a group of populists who were only trying to take advantage of the soldier's trial to increase their own political power.

Of course, one could use this opportunity to "settle accounts" with the defense minister and accuse him of being no less cynical than ministers Naftali Bennett and Miri Regev. These two ministers sharply criticized the court's sentence and called for Azaria's pardoning. However, the fact that Liberman serves as the defense minister on the day in which Azaria was convicted makes his statements endorsing the IDF very meaningful and effective. The same is true for Liberman's ability as defense minister to appease the public's fiery rhetoric.

In an internview with the Israeli Army Radio the morning after the conviction, Liberman radiated leadership. He replaced the prime minister as the responsible adult. Liberman admonished politicians, headed by Education Minister Naftali Bennett, who were calling for a pardon. The defense minister said that he expects them "to restrain themselves or keep quiet and let the security system manage the incident quietly, responsibly and with discretion."

Then Liberman stuck a pin in the clemency balloon when he concisely explained how politicians really have no effect over a verdict, and that all their statements were just misleading the public. "I think that an education minister [i.e., Bennett] should at least be able to read the law, and the law is very clear. All the slogans we are now hearing are just empty platitudes for themselves, not for Elor Azaria," he concluded.

True, Liberman aimed his attack at Bennett as an easy target at this stage in Liberman's political career in which he competes for the right-wing vote. But what cannot be ignored is that the defense minister's words were also directed at the prime minister. Prime Minister Benjamin Netanyahu needed almost nine hours from the time the verdict was made public to post his Facebook response. And his response was truly a political work of art with one goal in mind: not to abandon the right-wing electorate to Bennett. Alongside the expected, measured endorsement for the IDF and its embattled chief of staff, Netanyahu expressed empathy for the soldier and his family. He ended by expressing support for a pardon. Netanyahu did not wait for the sentencing, as would befit the leader of an enlightened state, thus creating a tailwind for riffraff from the right. And due to threats coming from that same direction, the court judges will be forced to receive close-quarters protection from now on.

It took a lot less time for Culture Minister Miri Regev to form her opinion of the ruling. And from her rapid response, it is clear that she did not even read the detailed court verdict. Not unsurprisingly, Regev announced that she would work for Azaria's pardon, because "this is not the way we treat a soldier who belongs to all of us. We are talking about a trial that never should have gotten off the ground."

Bennett's short but firm statement, posted on Facebook, was aimed directly at Liberman, stating that he expected him to keep his many promises and secure an immediate pardon for Azaria.

The Elor Azaria incident turned into a political affair from the first moment; this was mainly because right-wing Knesset members used the episode for their own needs. From the beginning they announced that they do not accept the authority of the military court, and they flatly stated that it was just a show trial.

Former Minister Ya’alon described this politicization process with precision on Dec. 28. He stung Netanyahu over the fact that at first, Netanyahu spoke out against Azaria's moral lapse, but then, upon realizing which way the public winds were blowing, the prime minister did an about-face. "The politicians fell upon this whole case as a [political] opportunity. They suddenly started to declare that the soldier was a hero and began to spread all kinds of rumors. At the beginning they were against the prime minister, against me and against the chief of staff [Gadi Eizenkot]. Afterward, the prime minister unfortunately switched sides and decided to embrace the family and the soldier. That is his business, not mine. I decided to endorse the commanders, and I remained alone in this particular battlefield. It was clear to the entire command level that this [shooting] was unacceptable. The ones to determine the proper procedures for opening fire are the commanders, not politicians like [Knesset member from Likud Oren] Hazan and Liberman," he said.

The Azaria family is made of the same cloth as the inflamed right that turned the soldier's trial into a nationalist-political hot potato. During Operation Protective Edge in the summer of 2014, Azaria's father, Charley, wrote on Facebook, “[Ultranationalist Rabbi Meir] Kahane was right.” Elor's mother confirmed this and added, "Death to those who harm Jews. Enough with the humanism; if needed, kill women and children."

So it is easy to understand why the Azarias pinned their hopes on statements made by Regev, Hazan and former Knesset member Sharon Gal. They believed vain promises that the masses would arise to fight for Azaria's exoneration.

But the masses, as it turned out, stayed home. The rally organized by Gal on Rabin Square in Tel Aviv on April 19, 2016, in support of Azaria turned out to be a resounding failure. Gal himself, Azaria's principal supporter, disappeared brutally from public life due to personal problems. Azaria was left alone in the legal battlefield, on the way to serve a prison sentence.

As Liberman explained, Bennett and Regev have no power or influence in getting a pardon for Azaria. The law clearly says that with regard to a military trial, the only ones who have authority to grant pardons are the head of central command or the chief of staff, not the Knesset. Thus, as in all the stages of the affair, the clemency issue became a sleight of hand among politicians who put themselves first.