While IDF Chief of Staff Gadi Eizenkot defended the verdict against the soldier who shot a wounded Palestinian assailant, Prime Minister Benjamin Netanyahu offered only feeble support of the army’s leader. 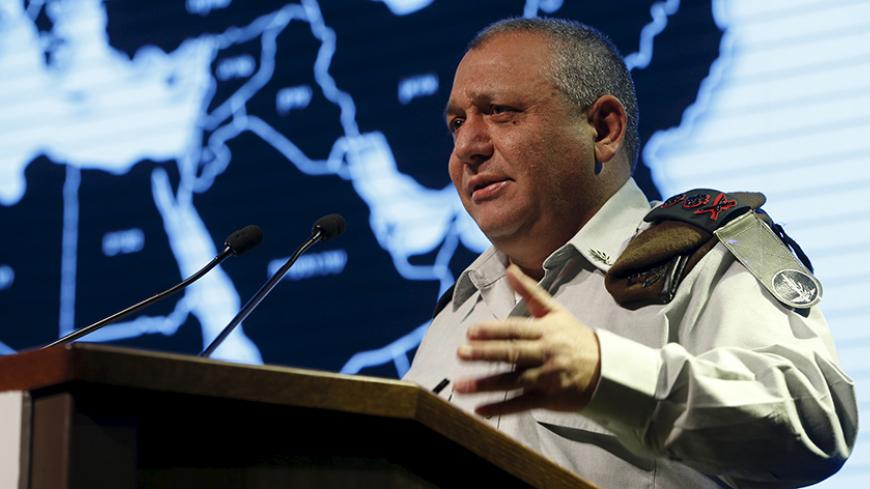 The Knesset’s Foreign Affairs and Defense Committee had a heated meeting last July with Chief of Staff Gadi Eizenkot. It was an unusual session, requested by Eizenkot, who wanted to shock the political class by warning that the greatest threat facing the Israel Defense Forces (IDF) is not the foreign armies beyond Israel’s borders. It is the loss of public trust in the military and its leaders. The context was obvious. The chief of staff was referring to comments by Knesset members and other public figures about the trial of Sgt. Elor Azaria, who was accused of killing a neutralized terrorist on March 24 (and since convicted by a military court).

The chief of staff’s alarm call came after several long months of incitement against him and the organization he heads. He felt that senior political officials were attempting to delegitimize his firm position against what Azaria did in order to score political points. But not much happened since then. Eizenkot’s warning went unheeded, and the campaign of incitement against him only got worse as the date of the verdict approached.

Based on the responses to Azaria’s conviction Jan. 4, it appears as if Eizenkot foresaw exactly what would happen. A mob of people from the right rioted outside the Tel Aviv court, even threatening Eizenkot with their chant: “Gadi! Gadi! Watch out! Rabin is looking for a friend!” They were referencing late Prime Minister Yitzhak Rabin, assassinated by a right-wing assailant in 1995 (and to the eulogy by former President Bill Clinton, who said, “Goodbye friend”).

Nine long hours passed before the prime minister of Israel deigned to respond to this incitement. In a brief statement on his Facebook page, Benjamin Netanyahu offered anemic support for the chief of staff, while at the same time calling for Azaria to be pardoned, even before his sentence was declared.

Netanyahu actually waited with his response for nine hours to check the public mood in polls and on social networks. And when he finally reacted on Facebook, he avoided any significant and deep comments that showed leadership or support, as previous prime ministers like Rabin or Ariel Sharon would have made. Instead, his main purpose was to avoid infuriating the right. Indeed, a poll released that evening by Channel 2 showed that Netanyahu was walking on safe ground when it came to Azaria. The public supported the shooter and opposed the court’s verdict. Israelis not only supported a pardon, they also opposed the chief of staff’s remarks on the eve of the verdict that, “An 18-year-old man serving in the army is not ‘everyone’s child.’ He is a fighter, a soldier, who must dedicate his life to carry out the tasks we give him. We cannot be confused about this.” Although he did not mention Azaria by name, his comments targeted those who tried to portray Azaria as an innocent victim of circumstances. The Channel 2 poll cracked a long-standing Israeli consensus that the chief of staff tops the list of the most popular people in the country.

At about 2 a.m., six hours after the prime minister offered his laconic support, Capt. (Res.) Ziv Shilon responded with an agonizing Facebook post, commenting on Netanyahu’s lack of leadership. Shilon, a severely wounded IDF veteran, lost both his arms in a military action in Gaza in 2012, where he was serving as a company commander at the Givati division.

Shilon’s post consisted of a long, heart-wrenching letter in which he described the pain he felt seeing the incitement against the chief of staff on TV. “I never cried in the most difficult moments — moments I would wish on no one. But today I sat there and broke down sobbing, alone and all by myself. … I cried for the people of Israel, which is tearing itself into shreds with this unprecedented hatred. I cried for the hands I left in Gaza. And I asked myself for what may have been the first time in my life, if it was worth fighting for a nation that hates itself.”

Shilon’s post spread across the internet like wildfire. It received some 69,000 “likes” and over 28,000 “shares,” and it was mentioned by all the major media. Shilon defeated Netanyahu by huge margins in the “Facebook test.” The prime minister’s post only received 21,000 “likes” and 1,600 “shares.”

Shilon’s comments motivated a demonstration on Jan. 7 in Rabin Square in Tel Aviv. Some 1,500 people attended the event, calling for national unity. They were joined by Knesset members, mainly from the opposition, such as opposition leader Isaac Herzog of the Zionist Camp, his partner in the party’s leadership Tzipi Livni and Chairman of Yesh Atid Yair Lapid, but also by Knesset Speaker Yuli Edelstein and Knesset member Yoav Kish from the Likud.

There have been several other expressions of solidarity with the chief of staff, including other demonstrations in support of him. Former Chief of Staff Benny Gantz sent Eizenkot a personal letter, saying, “You’re doing the right thing. It is only appropriate that we remember and emphasize that even while we are defending ourselves, we must not lose our very character as a society.” Further support for Eizenkot came from dozens of battalion commanders in the reserves, who sent him a letter of support, along with an emotional call to the public to support the IDF in order to ensure the continued existence of the State of Israel as a Jewish and democratic state.

Another letter was written by former members of the Matkal commando unit, in which Netanyahu served as an officer. “We support the chief of staff, who is standing in the front lines, defending the spirit and values of the IDF. We extend our hands in support as he faces all those who threaten and incite against him, and who use the IDF and its troops as a spade for their own advantage.”

This desire to support and defend the chief of staff brought five former chiefs of staff together in a show of support for Eizenkot, initiated by Yedioth Ahronoth newspaper. Together, Gantz, Shaul Mofaz, Gabi Ashkenazi, Dan Halutz and Moshe Ya’alon wanted to relay the message: “Keep your hands off the IDF and the chief of staff.”

The countless letters of support, statements by the most senior officers and commanders of the IDF, and the demonstration organized by Shilon are the direct consequence of the absence of any unequivocal, sharp moral statement by the country’s leadership that the IDF and chief of staff must remain outside the political debate in the country. While it is true that Defense Minister Avigdor Liberman offered a very clear and sharp response to incitement from right-wing politicians (calling unequivocally to respect the military court's ruling), this only did part of the job. And so, even his declaration was not enough to fill the leadership vacuum created by the prime minister. Extensive coverage of demonstrations in support of the chief of staff by top IDF officers is an expression of the longing felt by the Israeli public for a responsible adult who would place his people well before any personal political benefits.