In a rare appearance before the Knesset’s Foreign Affairs and Defense Committee, Chief of Staff Gadi Eizenkot criticized politicians for acting against the Israeli military, using it for their own political agendas and eroding the public's trust. 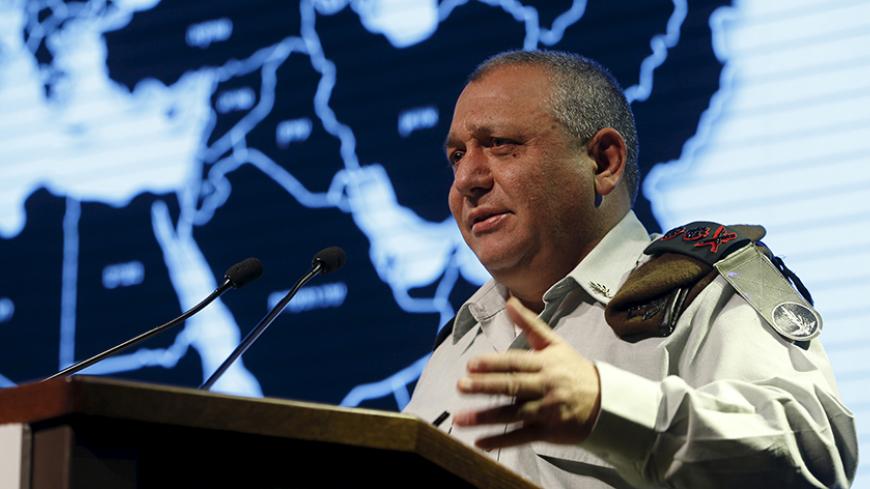 Any appearance by the chief of staff before the Knesset’s Foreign Affairs and Defense Committee routinely produces headlines about some security threat or other facing Israel. It could be anything from Iran to Hezbollah, Hamas or Syria. That is not what happened July 26, however, when Chief of Staff Gadi Eizenkot appeared before the committee.

Eizenkot devoted most of his briefing to a very different kind of problem. He spoke about how the Israel Defense Forces were under attack by public figures, arguing that the public’s loss of trust in the IDF is now the greatest threat faced by the military. He was speaking about politicians’ involvement in the trial of Elor Azaria, the soldier who shot a neutralized Palestinian attacker in Hebron on March 24 and is now accused of manslaughter.

It turned out that Eizenkot had approached the chairman of the Foreign Affairs and Defense Committee, Knesset member Avi Dichter, several weeks ago, asking to address the committee about the relationship between Israeli society and its military. Knesset members attending this week’s committee meeting said that he sounded emotionally charged, but most of all, he sounded focused on achieving his objective. From the moment he began to speak, it was clear to everyone that this was no routine appearance by the chief of staff. He was determined to shock his listeners, and he chose to use the platform of the Foreign Affairs and Defense Committee to rouse them and the public at large to point to what he considers the greatest threat faced by the IDF.

For months, the chief of staff has watched as he and the army he heads have become punching bags for right-wing politicians and targets of public disparagement. It is not hard to guess how he felt when Prime Minister Benjamin Netanyahu called Azaria’s father as if his son were some national hero, not a soldier accused of killing a neutralized terrorist.

Eizenkot spoke up after the Hebron shooting, alluding to a moral failure. In contrast, senior politicians like Minister of Education Naftali Bennett and now-Defense Minister Avigdor Liberman took the soldier’s side. It is hard to forget how Liberman, then a bellicose member of the opposition, appeared to declare the soldier's innocence at the military hearing in Kastina March 29 during the discussion over whether Azaria should be kept in custody. Eizenkot certainly did not forget it.

It seems certain that the chief of staff did not forget the demonstrations against him in front of the Defense Ministry, either. Nor was he oblivious to the incitement targeting Azaria’s company commander on the social networks. Nor could he ignore how Minister of Defense Moshe Ya’alon was removed from his position after backing him and the army.

As chief of staff, Eizenkot could have used almost any platform to ensure that his indictment of the political class got a proper hearing. He acted wisely when he went to the “heart of darkness,” the Knesset, Israel’s political nerve center. Since his remarks targeted politicians, there could be no more appropriate site.

With his Knesset committee appearance, Eizenkot has once again proven that he is made of the same stuff as political leaders. It takes great courage to speak so clearly, with such brutal honesty, particularly since what he had to say was undoubtedly also directed at the minister directly above him, Liberman, and his huge contribution to the lack of trust in the IDF.

It is also noteworthy that Eizenkot’s comments were not leaked to the press, as usually happens with these closed-door discussions. This time, they were published in an official statement released by the Foreign Affairs and Defense Committee with Eizenkot's approval. This shows that the chief of staff really is worried.

Eizenkot’s comments resonated throughout the conference room. He spoke at length about the Azaria incident, saying, among other things, “Comments heard recently about operational matters under investigation by the command and legal frameworks of the IDF are unwelcome. … Many statements have been made without knowledge of the facts in order to promote certain agendas that should not be linked to the IDF. We want the IDF to operate according to orders, rules of engagement and the IDF's spirit and values. If anyone wants the ethos of a gang, he should say so.”

Knesset members in attendance said it was one of the boldest, most impressive appearances by the chief of staff that they have ever seen. While Eizenkot also discussed security threats and a decline in terrorist activities, they were not the topic he came to address. When the chief of staff speaks about his fear that the people’s army is losing its legitimacy and strategic capacities due to attacks at home, it means something serious.

The question now is whether Eizenkot’s resounding and impressive appearance before the committee will have any effect on the politicians. Knesset member Omer Bar Lev, a colonel in the reserves and the former commander of the elite Sayeret Matkal commando unit, is skeptical. As a member of the committee, he was very impressed by what Eizenkot had to say. It sounded to him like a wake-up call to Israeli society and especially to its politicians. In a conversation with Al-Monitor, he said, “As soon as the chief of staff speaks up like that, it is a dramatic event. I can’t remember anything like it. If the members of the Knesset and the prime minister fail to understand the significance of this and don’t relate to it, just as I fear is happening now, then we have a problem. I really hope that Minister of Defense Liberman understands the cry of the chief of staff and its significance. As for Netanyahu, I don’t expect anything. He is so cynical. It looks like everything bounces right off him.”