Outgoing IDF Chief of Staff Gadi Eizenkot earned the respect of a wide spectrum of Israelis by sticking to his values, leaving his ego at home and keeping out of politics. 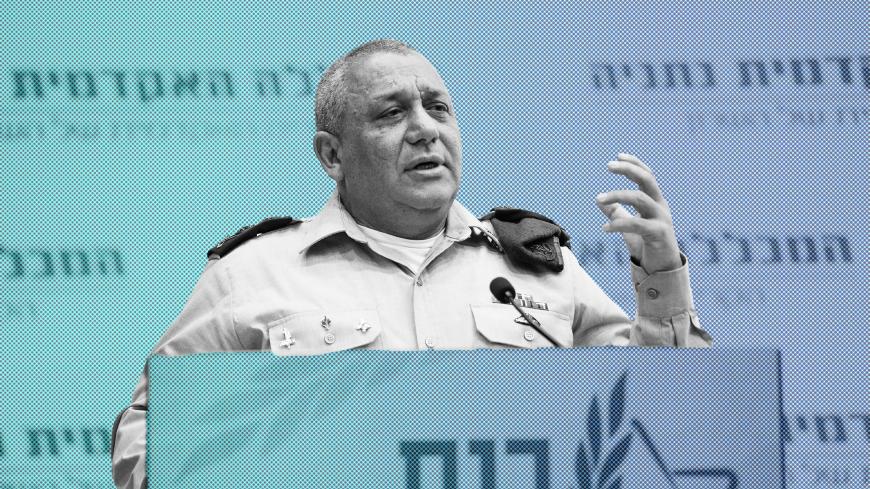 In March 2016, Israeli society was shaken by the Elor Azaria incident, in which an IDF soldier shot to death a wounded Palestinian assailant in Hebron. The affair dominated the Israeli agenda for many months. In the summer of 2016, at the height of the scandal, Chief of Staff Gadi Eizenkot approached the head of the Knesset’s Foreign Affairs and Defense Committee, Avi Dichter, and asked to appear before the committee. It was no routine request and Dichter consented immediately.

During that turbulent time, the struggle for Azaria's release had become a political issue dividing the left and right. From the beginning, Eizenkot held that Azaria had acted against the basic values of the Israel Defense Forces. He refused to fold even when Prime Minister Benjamin Netanyahu publicly abandoned him and called Azaria’s father to score political points. It was a tense moment for Israeli society, with wide political outrage toward the chief of staff. Demonstrations outside his office included signs and slogans denigrating him and even depicting him as the wicked Haman of the Book of Esther. Politicians led by newly appointed Defense Minister Avigdor Liberman of Yisrael Beitenu actively campaigned for Azaria’s release.

In this volatile atmosphere, the chief of staff wisely decided to go to the Knesset to say his piece. Eizenkot’s appearance before the committee was charged with emotion and urgency. In his address, he warned the committee that political attacks on the IDF posed a threat not only to the Israeli military, but to Israeli society at large. Eizenkot is not known for his speeches, but in his focused and direct way, he got his message across. He used the opportunity to express his concern for the continued existence of the most Israeli institution of all: the people’s army.

As the episode unfolded, Eizenkot refused to succumb to the prevailing mood on the right. He would not pardon Azaria (in his final interviews before leaving the post, he described Azaria as an “antihero”) and stood resolute against a barrage of vicious political attacks. Cabinet members spoke out against him last summer and claimed that his policies in Gaza had failed. Likud Knesset members like David Bitan accused him of costing Israel deterrence capabilities.

Eizenkot is the ultimate symbol of a people’s army. The child of Moroccan immigrants, he grew up in the towns of Tiberias and Eilat, became an outstanding officer in the Golani Brigade and rose through the ranks until selected to command the IDF. Israel’s 21st chief of staff, who completed his four-year term on Jan. 15, has many important achievements under his belt. He ended the “intifada of knives” that broke out in 2015, oversaw attacks on Iranian targets in Syria and managed a campaign in Gaza that apparently spared countless lives on both sides.

Apart from his ability as a military leader — one of the best Israel ever produced, according to many military observers — what may be his greatest legacy is the stately manner in which he led the army through the publicly and politically turbulent time of the Azaria affair. Eizenkot succeeded in maintaining his independence and values when faced with a political system without inhibitions and a right-wing coalition with no restraint. He stood as firm even when Netanyahu refused to back him, when faced with vitriol from the street and when dealing with right-wing politicians inciting against him. Even then, the chief of staff would not speak out against the political leadership or even the prime minister, as much reason as he had to do so. He chose not to get into political battles. He did not spend his mornings checking his popularity ratings, something several of his predecessors loved to do.

As such, there was no guarantee that Eizenkot would end his term on such a high note. Despite its lack of restraint, even the far right was unable to tarnish his image and official stature, or more importantly, the legitimacy of the organization he headed. When the members of the Foreign Affairs and Defense Committee commemorated his parting at a closed event two weeks ago, he was embraced by left and right alike. Some Knesset members had tears in their eyes as they said their goodbyes.

On the evening of Jan. 13, all the top officials from the right and the left came to bid farewell to Eizenkot in one of the most touching and unifying events in Israel over the past few years. The president and prime minister, former defense ministers and chiefs of staff, ministers and Knesset members from across the political spectrum all praised him. In their remarks, Netanyahu and President Reuven Rivlin focused on different aspects of his service.

“Happy is the nation that merited a son like you,” said the president. He was apparently referring to the Azaria incident when he said, “Alongside the military and professional issues, you also took a clear view on the most complex issues in society. You did not hesitate and were not afraid to deal with them, even when it resulted in criticism.” Netanyahu, on the other hand, focused on security: “Gadi, tremendous work has been done in the IDF under your command, and we still have much work ahead.”

What was it that left Eizenkot with across-the-board respect? It was apparently a combination of his focused personality, sense of his official role and authenticity, combined with a quiet style of leadership. Never once did Eizenkot give the sense that he viewed his position as a launching pad for a political career. He refused to indulge lobbyists or self-interested people, nor did he ingratiate himself with politicians. He simply went to work.

It is hard not to compare the sense of unity in the way the public and political leadership alike parted from Eizenkot to the way it parted from retired Police Commissioner Roni Alsheikh just a month ago. Alsheikh led the police through a volatile period of criminal investigations into the prime minister. But instead of allowing his investigators to run the process, he gave in to his personal inclinations by reacting to the prime minister’s attacks against the police and himself.

Alsheikh was no doubt very well suited for his position, but he got dragged into a political war against Netanyahu and ended up causing large swathes of the public to lose trust in the police. In an interview on the news show Uvda, Alsheikh was portrayed as someone who enjoyed flaunting his power. Many people believed that he wanted to get his revenge on the prime minister. Had he acted like Eizenkot and practiced restraint even when he felt abandoned by the prime minister, the end of his term could have looked very different.

The challenges Eizenkot faced were no less difficult. Unlike Alsheikh, however, he managed to transcend politics and give the political class a lesson in leadership.