Netanyahu’s empathy for Hebron shooter reveals a lot about Israel

The support by Israeli Prime Minister Benjamin Netanyahu and his party members for the IDF soldier convicted of manslaughter in Hebron demonstrates the moral decline of the Likud. 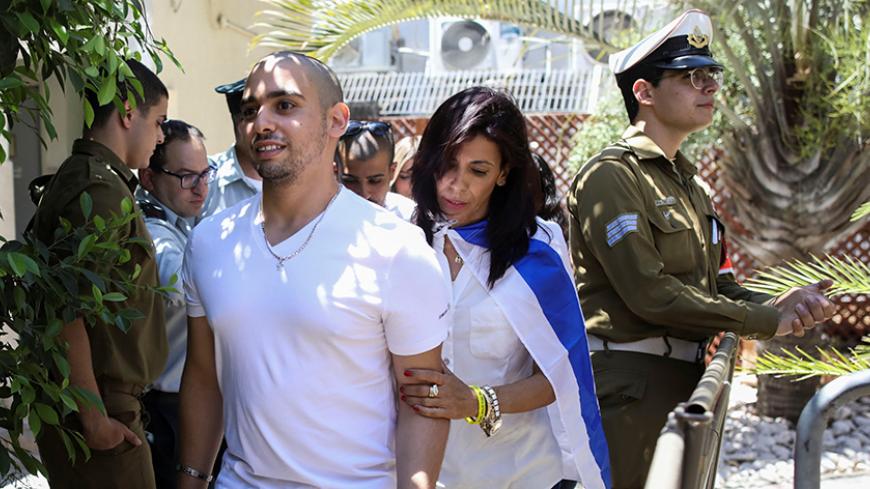 Former Israeli soldier Elor Azaria, who was convicted of manslaughter and sentenced to 18 months imprisonment for killing a wounded and incapacitated Palestinian assailant, arrives together with his mother to hear the ruling at an Israeli military appeals court in Tel Aviv, Israel July 30, 2017. - REUTERS/Dan Balilty

Knesset member Nava Boker (Likud) was present in the Military Appeals Court on July 30, when it discussed the appeal submitted by Elor Azaria, sentenced to 18 months in prison for manslaughter. Her presence there underscored in a disturbingly clear way the moral and ethical low point that the Likud has reached. In January, Azaria was convicted of killing a neutralized terrorist in Hebron in March 2016. Yet Boker made a point of calling him "the son of every one of us," just moments before the court rejected his appeal.

Boker may hold the title of deputy speaker of the Knesset, but she is hardly a major political figure or even a senior member of her party. Still, her embrace of Azaria is an expression of the overall mood within the Likud; it also reflects the attitude of its leader, Likud Chairman and Prime Minister Benjamin Netanyahu.

Nor was Boker the only member of the Likud who felt confident enough to cast aspersion on an unequivocal legal ruling, which determined that Azaria acted out of a desire for vengeance. Knesset member Oren Hazan (Likud) also made an appearance at the hearing, tweeting from there, "Only in Israel would an outstanding warrior, who eliminated a despicable terrorist determined to spill Jewish blood, be convicted of murder like a felon and be sent to jail."

When the prime minister himself shows empathy for an event that runs counter to the underlying principles of Israeli society, he is showing his support for Knesset members like Boker and Hazan, who are trying to turn a soldier who went astray into a hero.

Azaria is not the "child of all of us." He is a soldier convicted of manslaughter (with the court rejecting appeals) and sentenced to 18 months in prison. The incident began in March 2016, when a video of the illegal shooting was released by the B'Tselem human rights group. Since then, the right has turned the incident into a political tool to win support and incite the masses. As part of this process, the chief of staff and other senior Israel Defense Forces (IDF) officers were transformed into "public enemies" and "traitors," and subjected to an unprecedented campaign of delegitimization.

The use of the expression "the son of all of us," or "the child of all of us," was borrowed from the campaign to release abducted soldier Gilad Shalit. It is a manipulative move that says more about the moral and ethical vertigo of the ruling party and its leader. The fact that these attacks on the IDF are led by Knesset members from the Likud, a party that represents the center among the Israeli public, rather than from some fringe right-wing party, ensures that the Azaria incident will become a dramatic milestone in the history of Israeli society.

As prime minister, Netanyahu approved the deal with Hamas to obtain Shalit's release in 2011. He did this even though Shalit's release came at a hefty price, with Shalit exchanged for over a thousand terrorists held in Israeli prisons. Netanyahu made his decision despite demonstrations from the far right and threats from settlers that he would pay a steep political price for what he did. Likud ministers told the press that on the weekend in which Shalit returned home, they were welcomed in synagogues across Israel with cheering and hugs. Images of the abducted soldier stepping down the ramp of the airplane that flew him to freedom after six years in Hamas captivity may have run counter to all the doctrines of how to fight terrorism, adhered to by Netanyahu and the right. Nevertheless, they were also an exhilarating display of mutual responsibility, the commitment to free captured soldiers, and social cohesion and strength.

Shalit was not a hero, but he was captured during military action. This marked the beginning of Operation Summer Rain in the Gaza Strip. In contrast, Azaria was a soldier who killed a neutralized (wounded, on the ground) terrorist, intentionally violating such basic IDF values as morality and purity of arms. True, he was a young man of 18, ordered to face complex situations pitting him against a civilian population under occupation. Nevertheless, that does not give him the freedom to act counter to the army's explicit orders, nor does it grant him immunity from punishment.

Six years after Shalit was released, the Likud in its current state has been weakening and dismantling society from within. The Azaria incident is a warning signal on that slippery slope. How much Israeli society has changed in its attitude toward incidents of this kind can be seen when compared to the Givati A and B trials in 1988 and 1990, respectively. The first intifada was raging at the time, when soldiers from the Givati Brigade were accused of using excessive and unnecessary violence against Palestinians. Back then, the culprits did not become heroes. Instead, they were forced to bear the stigma of their actions.

Opinion polls conducted throughout the Azaria incident, including one from half a year ago, show that most Israelis back the soldier convicted of manslaughter, and support granting him clemency. According to former Defense Minister Moshe Ya'alon, these polls can be found on the prime minister's desk. They were responsible for Netanyahu’s sharp reversal, from condemnation to support.

Immediately after the incident occurred, Netanyahu and Ya'alon (then still defense minister) released a statement distancing themselves from the way Azaria acted, claiming that what happened in Hebron did not represent the intrinsic values of the IDF. In retrospect, Ya'alon explained that “this incident was out of the ordinary. Therefore in a joint decision we made a statement together a few hours after the incident in order to prevent a conflagration on the ground, to prevent anyone from using the incident as proof of Palestinian blood libels … as if Israel and IDF soldiers carry out extra-judicial executions.” Ya’alon characterized the decision as one taken in the interest of national security.

It took just two days for Netanyahu to change course on March 26 publishing a less equivocal statement. Ya'alon was abandoned. Netanyahu realized that Azaria had public backing, and that the leaders of the other right-wing parties, HaBayit HaYehudi head Naftali Bennett and Yisrael Beitenu leader Avigdor Liberman, were winning support for speaking out on Azaria's behalf. At that point, Netanyahu made a sharp U-turn.

Three days after condemning the murder, Netanyahu called Azaria's father, Charlie Azaria. By placing this sympathetic phone call, Netanyahu signaled that he chose to take his lead from the mob, instead of supporting the IDF and its officers. Ya'alon was later removed from the Defense Ministry.

In the Azaria incident, the dynamic between Netanyahu and the Israeli public is very telling. It is the consequence of Netanyahu's long years in power, which he used to shape society in his own image: victimized, persecuted and polarized. His formula is the exact opposite of the doctrine promulgated by Israel's founding father David Ben-Gurion, who strove to create a cultural and natural melting pot here. In contrast, Netanyahu identifies the most fragile links in the chains binding society together and makes every effort to weaken them further — all in an attempt to ensure his own survival.