For Israel, more unknowns than knowns with Trump

The Israeli right and defense establishment have found it hard to determine with any certainty what direction US President-elect Donald Trump will take on policy. 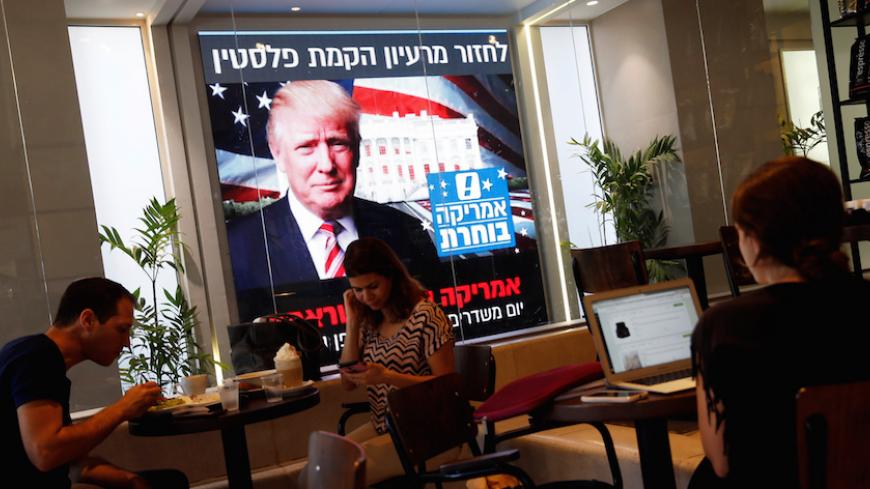 People dine at a coffee shop as an image of newly elected U.S. President Donald Trump is displayed on a monitor in Tel Aviv, Israel Nov. 9, 2016. - REUTERS/Baz Ratner

Israeli political parties usually hold their weekly meetings in the Knesset. On Jan. 2, HaBayit HaYehudi held its weekly meeting in Maale Adumim, an Israeli settlement town located east of Jerusalem on territory that Israel captured during the 1967 Six-Day War and has since occupied. The decision to move this particular meeting to Maale Adumim at the start of the new year constituted a bold political statement.

Education Minister and HaBayit HaYehudi Chairman Naftali Bennett and his partner in the party’s leadership, Justice Minister Ayelet Shaked, have been doing everything they can to make it crystal clear that the age of restraint is over and the age of annexation is about to begin. In keeping with this outlook, Bennett announced that he plans to submit a proposal to the government to annex Maale Adumim. Bennett’s ultimate objective is to declare the annexation of all of Israel’s major settlement blocs in the occupied territories and apply Israeli law in them while the current Israeli government is in office. Bennett announced, “By the end of January, we will propose legislation to impose Israeli law on Maale Adumim. I expect all members of the government to lend a hand to this important initiative.”

We are already halfway through January, and no such proposal has been brought before the government. One senior member of HaBayit HaYehudi told Al-Monitor on the condition of anonymity, “We still don’t know when we will submit the proposed legislation. It really depends on our talks with the [Donald] Trump administration. In any event, there is nothing to talk about until Trump is in the White House. Then we’ll see.”

No one can remember the last time that Jews waited for anyone — apart from the Messiah, for whom they have longingly waited since the dawn of history — with the kind of eager anticipation they have of Trump taking office. One Likud member jokingly told Al-Monitor that the people of Israel expect Trump to forgo Air Force One and come riding in on a white donkey, as Jewish tradition has the Messiah arriving. The Israeli right’s expectations in regard to the new president are sky high. They are waiting for him to move the US Embassy to Jerusalem, remove the restraints on everything involving construction in the territories, stop talking about peace and a two-state solution and quietly recognize Israeli annexation of the settlement blocs.

This is why quite a few jaws dropped in Jerusalem when Trump’s designated secretary of defense, James Mattis, said on Jan. 12, during his Senate confirmation hearing, “The capital of Israel is Tel Aviv.” His statement struck the Israeli right like lightning on a sunny day. It forced them to contend with President-elect Trump not having called his nominee to order. The Israeli government was especially concerned when Trump remarked that he would be bringing people with different opinions into his Cabinet and that he does not expect them to change their opinions because of him.

The question now is what will happen on Jan. 20? Will Bennett’s annexation plan really take form and be fulfilled? Will a new US administration reverse course and change the long-established policies of preceding administrations? Right now, no one knows. Bennett has postponed his annexation plan until after the transition of power in Washington. After last month’s traumatic vote by the UN Security Council affirming the illegality of the settlements, even Bennett is not willing to take another chance and challenge Barack Obama during his final days as US president.

Opposing Bennett this time is Israeli Defense Minister Avigdor Liberman, chairman of Yisrael Beitenu. Annexation, Liberman believes, will not help the settlement enterprise. It will only hinder it. All the talk about annexation will result in disaster for the settlement enterprise and should, therefore, be stopped. As someone who is trying to develop his own channel of communication with the new Washington, Liberman knows what he is talking about. Prime Minister Benjamin Netanyahu has also rejected talk of annexation, at least at this stage, even though there is widespread, almost wall-to-wall support for it among the members of his own Likud in the Knesset. Both he and Liberman are trying to show a sense of national responsibility. They have no plans to upset Trump’s staff before they even settle into their new positions.

At the same time, disconcerting bits of information keep arriving. For example, a classified report says that the new secretary of state, Rex Tillerson, believes that there should be no significant change to US policy toward the Middle East or the Palestinian-Israeli conflict and that he has no intention of initiating such a change. As a foil to Tillerson, who is thought to be close to Russian President Vladimir Putin, Israelis are pinning their hopes on the new US ambassador to Israel, David Friedman, who wants the US Embassy moved from Tel Aviv to Jerusalem. Friedman has a home in Jerusalem and plans to work out of it if the embassy is not moved. According to information reaching Israel, this would cause quite a bit of trouble for US security forces, which would have to protect the embassy in Tel Aviv as well as Friedman in Jerusalem.

One group really trying to understand what to expect from the new US administration regarding policy in the region is the top brass of Israel’s defense establishment. They are trying to collect information on Trump’s plans, but at this stage at least, there are more unknowns than knowns. The cautious assessment of the Israel Defense Forces (IDF) is that the most significant change in policy will take place along Israel’s northern border, where the United States will align its policy with that of Putin in all matters pertaining to the war in Syria.

Such a policy would be quite disconcerting to the IDF and the various branches of Israel’s defense establishment. They are already groaning under the burden of the Russian presence and increased Russian activity in the region. Meanwhile Israel does not look positively on any strengthening of the Shiite axis from Tehran to Damascus and from there to Beirut. Liberman is sure to bring this up during his first visit to the Pentagon under Trump and Mattis.

When it comes to Israel’s relationship with the Palestinians, to moving the US Embassy to Jerusalem and to the possibility of annexation, Israel’s defense establishment prefers to wait until Trump formulates his positions. “There is no way of knowing which way he will go,” one senior defense official told Al-Monitor on the condition of anonymity. “It is our estimation that Trump himself has not yet formulated his own attitudes and positions regarding what is happening here. It is obvious that he has a natural tendency to be pro-Israel, and the advisers surrounding him are supportive of us. On the other hand, reality has its own influence and power. What this really means is that anything is possible.”