Secretary of State-designate Rex Tillerson’s ties with Arab countries worry Israeli officials, while Palestinians despair that the Trump administration is an extension of the current right-wing Israeli government. 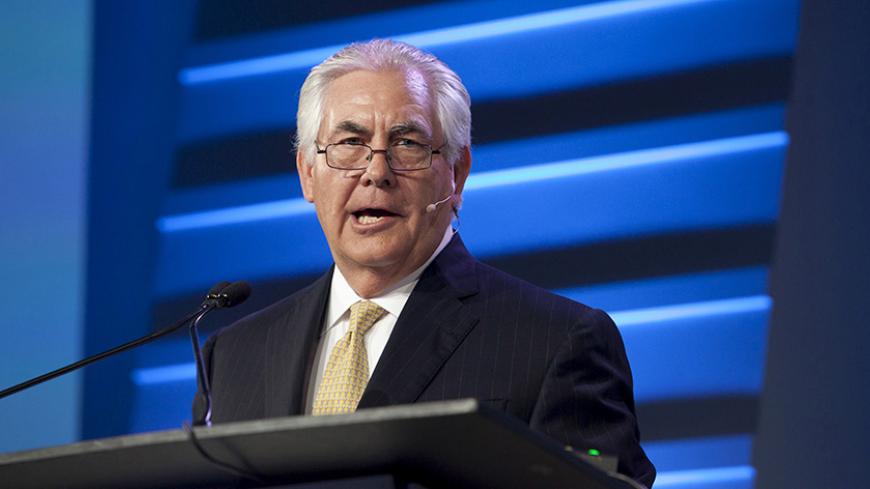 Following the selection of Rex Tillerson to be the next US secretary of state, one could, perhaps surprisingly, hear tones of disappointment in Jerusalem and Ramallah. Tillerson's nomination was vintage Donald Trump. After publishing a long list of likely Republican nominees that surprised nobody, he opted for a petrol industry billionaire with no background whatsoever in foreign affairs aside from making deals for ExxonMobil. In short, Trump chose a climate change cynic by definition and a business deal-maker. On top of this, Tillerson’s main claim to international fame is that he is among Russian President Vladimir Putin’s friends. If Putin did indeed interfere in the US elections, he got his reward.

Official Israel had hoped for a traditional, right-wing Republican friend of Israel’s current government and prime minister, like former New York Mayor Rudy Giuliani. A senior Israeli Foreign Ministry official in charge of US relations told Al-Monitor that publicly the ministry welcomes Tillerson's appointment. Israel trusts President-elect Trump and his administration to have a pro-Israel policy. On the other hand, the official said, Tillerson is practically an unknown. Figures in the government’s most senior circles are somewhat nervous about the designated secretary of state's background.

Tillerson reminds veteran Israeli diplomats of the former secretary of state who recommended him to Trump — James Baker — who more than once gave the Yitzhak Shamir government the cold shoulder and pressured Israel into participating in the Madrid international peace conference in 1991. The official also said that Jerusalem feels uneasy about Tillerson’s close ties with Arab Gulf countries, such as Saudi Arabia, Qatar and Yemen. His closeness to Moscow is also perceived as a bad omen, given Putin's traditional pro-Arab positions.

In the Palestinian Authority, the reaction was much grimmer. A senior PLO official close to President Mahmoud Abbas told Al-Monitor on condition of anonymity that the whole Trump administration is an American extension of the Benjamin Netanyahu-Naftali Bennett right-wing government. He was particularly horrified by the nomination of David Friedman, an outspoken supporter of Israeli settlements and the annexation of the West Bank, as the next US ambassador to Israel.

“It seems that the Trump administration is not concerned by a possible clash with the Arab world on the Palestinian issue,” he noted. “An American pro-settlement policy will be rebuked by the entire Arab world and the Arab League. At least this time, we do not have any false hopes for an imaginary peace process and will act accordingly.”

Both sides are currently contemplating and preparing for Washington's new Middle East team. According to the Israeli senior official, the current Israeli ambassador to the United States, Ron Dermer, will hold talks with the secretary-designate in the near future, before his congressional confirmation hearing. It is Israel’s view that given the new administration's clearly right-wing nature and staunch pro-Israeli views, the secretary of state will not recommend policies that differ from the views expressed by Trump during the election campaign. Prime Minister Netanyahu’s team — in particular his confidant, the lawyer Yitzhak Molcho, the acting head of the National Security Council, Yaakov Nagel, and the head of Mossad, Yossi Cohen — intends to have close ties with Trump’s White House team, the next US national security adviser, Michael Flynn, and Trump’s domestic politics advisers.

Netanyahu intends to coordinate policies with Trump at their first Oval Office meeting, policies that will enable undisturbed Israeli settlement construction, mainly in the Jerusalem area, which will be high on Netanyahu’s meeting agenda, as it is key to the sustainability of his right-wing government. Concerning Iran, Netanyahu does not believe Trump and his secretary of state will disavow the nuclear agreement, but will instead enhance coordination with Israel on tighter joint monitoring of the deal's implementation and Iran’s backing of regional terror.

On the Palestinian side, there is a sense of despair about the Trump administration. The senior PLO official told Al-Monitor that Abbas is reaching out to the leaders of Saudi Arabia and Egypt to ask that they convey messages to the president-elect and his secretary of state-designate about the centrality of Palestinian statehood to the Arab world. The Palestinian leadership is most concerned about the time that will be wasted waiting for Trump to formulate a policy on Palestine and Israel. The year 2017 will mark the 50th year of the Israeli occupation, so Palestinians will be more desperate and demanding than ever, making it impossible to rule out an outbreak of greater violence, such as an armed intifada, the Palestinian official stressed.

Having said that, it is too early to know what the policies of Trump and Tillerson will look like in reality. Bringing Tillerson on board as secretary of state signals a cautious approach by the next administration. His nomination might indicate that the administration prefers to avoid taking too many risks with extremely pro-Israel positions and activities in light of interest in having good relations with Russian, Saudi Arabia and Egypt.

Whatever Tillerson the deal-maker is planning for the region, and whether Trump has any interest in a regional deal, will depend in any case on the other regional actors. The US administration is unlikely to advance these issues unless encouraged by the parties or is indeed forced to react by greater violence.