Will state of Palestine be Obama's legacy?

Some observers are urging that President Barack Obama allow a vote in favor of recognizing the state of Palestine at the UN Security Council before leaving office. 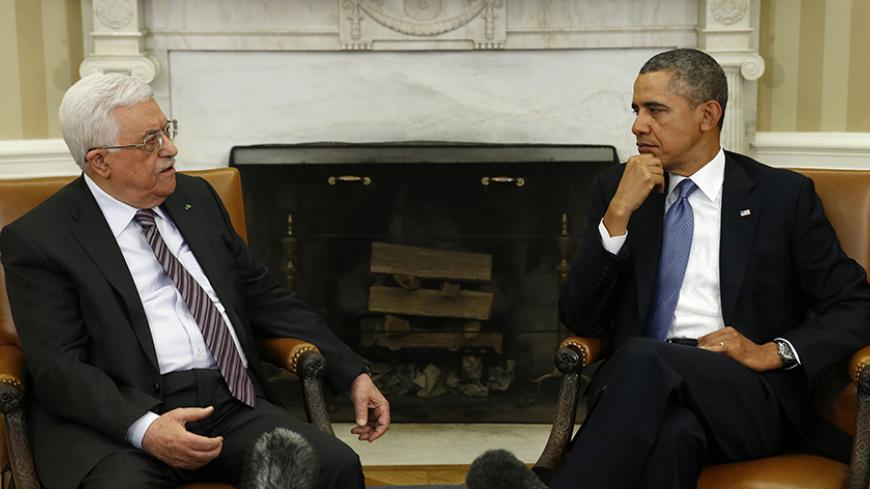 A veteran Palestinian thinker and legal expert believes that US President Barack Obama should use his remaining months in the White House to ensure that a UN Security Council resolution recommending the recognition of Palestine be permitted to pass. Camille Mansour, a former Sorbonne professor and adviser to the negotiating team of the PLO, told Al-Monitor, “Now that he is freed from elections-related political shackles, he can allow for Palestine to join the UN as a state under occupation.”

According to Mansour, Obama could accomplish a number of goals with such a decision. He said that it could be Obama’s gift to Middle East peace before leaving office Jan. 20. “He has the ability to instruct single-handedly his UN representative to support or abstain from a resolution that will become irrevocable once the UN Security Council passes it,” Mansour said. Even Obama's successor, Donald Trump, will not be able to reverse it.

Mansour's idea has been discussed by numerous pundits, as has a Security Council resolution against Israeli settlement activity. Mansour said that some decisions within the two-state parameter could be invalidated by the new president. “The idea of a Security Council resolution regarding settlements or a framework for a future resolution can easily be reversed by the newly elected president,” Mansour said. Recognition of a state, however, once it is approved by the United Nations is much more difficult to reverse, he argued, as the state would have received international legitimacy.

Israel has rejected taking part in an international peace conference advocated by France. On Nov. 7, Jacob Nagel, Israel's acting national security adviser, told French peace envoy Pierre Vimont that Israel would not participate in any international conference, considering such a forum an international diktat. Israel instead claims it wants direct talks with the Palestinians.

Palestinian and international political observers are worried that the newly elected US president will abandon the Middle East or alternatively make extremist decisions, such as enacting his campaign promise to move the US Embassy from Tel Aviv to Jerusalem. The Palestinian government, headed by Prime Minister Rami Hamdallah, had at its Sept. 27 Cabinet session condemned Trump's statement.

Palestinian officials appear, however, to be accepting of the new reality, with President Mahmoud Abbas welcoming Trump's election in a Nov. 9 message, also saying that he hopes a “comprehensive peace will be achieved during his term.”

PLO Secretary Saeb Erekat reiterated the need for the new US leader to stay committed to the two-state solution. “We hope from the new US administration to translate talk about the two-state solution into a reality, because security, peace and stability in this region can only happen if the Israeli occupation that began in 1967 is defeated,” he said.

Meanwhile, Hamas called on the president-elect to reconsider US policy toward the Palestinian cause. “The suffering of the Palestinian people is continuing because of biased, successive American administrations in favor of Israel,” the movement said in a statement released Nov. 11.

Obama making a controversial decision on the Middle East conflict would not be easy even though freed, as he is, from election shackles. There are skeptics who think he will not have the courage to make a bold decision as a lame duck in the White House.

Of three options, recognition of Palestine would be the toughest and a condemnation of settlements the mildest. Regarding the third option, Israel and Trump's pro-Israel supporters are already sending signals to Obama to forgo any kind of action at the United Nations.

Although Trump would not be able to reverse recognition granted by the Security Council, he and a pro-Israeli Congress could choose to punish Palestinians by withholding financial support to the Palestinian government. Censure of the settlements, however, would probably not elicit a strong reaction after Trump takes over.

Obama has long supported a two-state solution, but right-wing Israeli officials believe that Trump's election has buried the idea of a Palestinian state. Allowing a vote for Palestinian statehood — whether by withholding a veto or abstaining — would be a small step in helping translate thus far unimplemented US policy and guarantee that the new president will not be able to bury the two-state solution.

This is especially needed given the United States' 10-year, $38 billion military aid package to help protect Israel by supplying it with a huge, up-to-date military arsenal. It is important that before passing the baton to Trump, Obama round out his legacy by responding to the will of the Palestinian people by permitting a vote for the State of Palestine.

It is no surprise that Obama and Benjamin Netanyahu have not seen eye to eye on the Middle East conflict and the Iranian nuclear deal. A positive decision on Palestinian statehood would be a peaceful response to the right-wing Israeli prime minister’s anti-Obama interventions in US policy, especially regarding Iran. It will also help redeem his presidency not only in the eyes of Palestinians, but those of many progressives in the United States and around the world.

Progressives have been staunch supporters of Palestinian rights, including the right to statehood. Passage of a Security Council resolution recommending a Palestinian state would seal a progressive legacy for Obama and help make up for his inability to reach a breakthrough in the Middle East conflict during his eight years in office.