Will Trump split the Israeli right?

Prime Minister Benjamin Netanyahu and Defense Minister Avigdor Liberman are using their US allies as strategic assets in their battles against Education Minister Naftali Bennett. 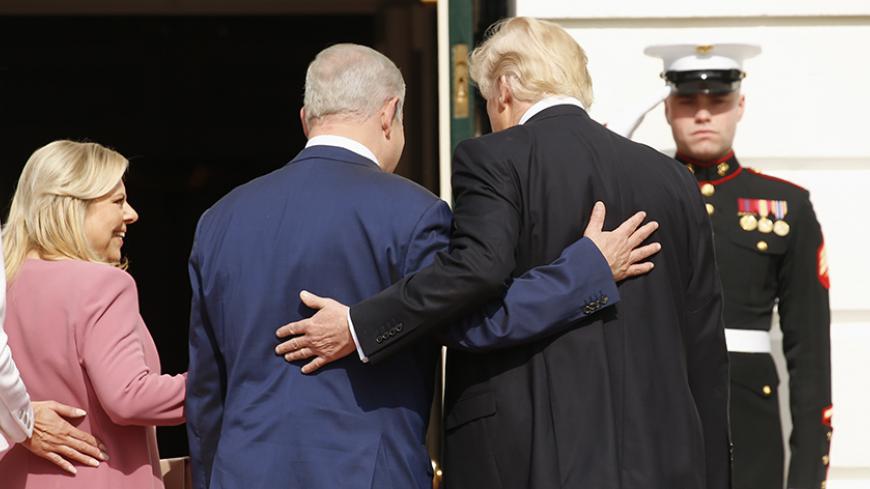 US President Donald Trump (R) greets Israeli Prime Minister Benjamin Netanyahu and his wife, Sara (L), as they arrive at the South Portico of the White House in Washington, Feb. 15, 2017. - REUTERS/Kevin Lamarque

In the middle of the interrogation, one of Netanyahu's top aides entered the room and whispered in the prime minister's ear. “President Donald Trump is on the phone,” the police investigators were informed. “We'll have to take a short break.” The interrogators had no choice. Israeli prime ministers do not have a habit of filtering calls from US presidents. So Netanyahu stepped out for a break, took Trump's call and then returned to his interrogation.

The story leaked to the press soon after, with headlines focusing on Netanyahu's conversation with Trump rather than the interrogation itself. The two men talked about Iran, in the wake of the Islamic Republic's testing of long-range ballistic missiles a day earlier. With that, Netanyahu had managed to turn the criminal investigation into an asset, sending the message to the public that while the police were investigating him over such nonsense as cigars, champagne and idle chatter with publishers, he was dealing with issues critical to Israel's future.

Netanyahu's staff vigorously refuted claims that the call from Trump had been coordinated in advance, claiming that they had been surprised by it. This hardly stands up to the test. Calls between leaders at that level are scheduled well in advance, sometimes days, along with a list of topics for discussion. The New York Times reported that sources in the Trump administration had confirmed that details of the call were planned “well in advance” and that it was mere happenstance that the call came through during Netanyahu's questioning.

One thing is certain: If the prime minister's staff really wanted to, they could have postponed the call until after the interrogation had concluded. Instead, they preferred to interrupt the proceedings and spin the call in Netanyahu's favor: Israel's law enforcement authorities are going after him for nonsense, while he is busy with pressing strategic matters. It looks like the White House willingly played along. After all, that's what friends are for.

Ridiculous fights are now breaking out between the Israeli right and the left and between the ideologically far right and right-wing pragmatists over the new US administration. Defense Minister Avigdor Liberman is currently on a round of introductory talks with senior US officials in Washington. Before departing March 6 for the United States, he said that Israel must not annex territory on the West Bank, noting receipt of a message from Trump's staff cautioning against such a move. Liberman's statement, which repositioned him in the sane center of the chaotic Israeli political map, came under harsh attack from fellow members of the right-wing coalition, led by HaBayit HaYehudi Chairman Naftali Bennett, who was joined by senior Likud ministers, including Deputy Foreign Minister Tzipi Hotoveli.

They still believe that Trump is a miracle for the Israeli right and that his election offers a one-time only, historic opportunity to establish facts on the ground (that is, expand Jewish settlements), trash the two-state solution as an option and annex Area C (West Bank land under full Israeli control). They ignore that Trump's promise to move the US Embassy from Tel Aviv to Jerusalem is fading in the distance, and believe that Israel should present its policies and demands to Washington and help the new administration formulate its policies while it is still in the process of defining them. According to sources on the right, Liberman concocted the message about annexation in an attempt to make the current administration appear to be like its predecessor, Barack Obama's administration.

While this was going on, a State Department spokesman said that, indeed, the administration expects Israel to restrict settlement expansion. Yet while this message may concur with Liberman's remarks, the right still insists, “The defense minister is trying to invent a reality and insists on missing an opportunity,” as one senior Likud minister told Al-Monitor on condition of anonymity. The minister added, “Trump's people are now formulating their policy, and a lot depends on what they hear from us. Liberman won't give them any chance to think outside the box and understand Israel's real security needs.”

Such infighting is not limited to Israel. According to Israeli sources familiar with workings in Washington, a fight between two opposing factions is underway there as well over the shape of administration policy. The clash pits the pro-Israel faction, which supports abandoning the familiar two-state solution while finding new formulas and solutions, against the realists, who believe the administration should not change what has been a consistent US policy. The latter are calling for support for a two-state solution, refusal to legitimize the settlement enterprise, and support for Israel's security needs and the Palestinians' right to self-determination.

Representing the pro-Israel faction are ambassador nominee David Friedman and Trump's son-in-law and adviser, Jared Kushner. Representing the realists are Secretary of State Rex Tillerson and Secretary of Defense James Mattis. That is why the Israeli right is watching Liberman's trip to Washington and his meetings with Mattis and Tillerson with considerable consternation. “The damage he will do in Washington will be very hard to repair later,” said one Knesset member from HaBayit HaYehudi who requested anonymity.

Liberman has not been particularly moved. According to a political source who spoke to Al-Monitor on condition of anonymity, Liberman told his people, “The next election will pit the dogmatic right against the pragmatic right.” He added, “The public will decide between those who want to complicate things for Israel and those working for its security, who see the situation in its true colors.”

Liberman plans to position himself at the center of this “pragmatic right.” He will be facing off against Bennett, who announced March 8 that HaBayit HaYehudi is moving its primaries forward, to right after Passover.

Bennett and Liberman's interests stand in stark contrast. Liberman needs as much time as possible at the Defense Ministry to cement his achievements and new image, so he is fully backing Netanyahu despite the mounting investigations. In contrast, Bennett has already exploited everything he can from the situation. The recently published state comptroller's report on the 2014 Operation Protective Edge indicated that Bennett, unlike Netanyahu and all the other ministers, had warned about the threat from Hamas' tunnels. This has provided him with the momentum he needed, so he is now contemplating new elections. With no plans to back Netanyahu if he is indicted, Bennett is preparing for every scenario, including quick elections.