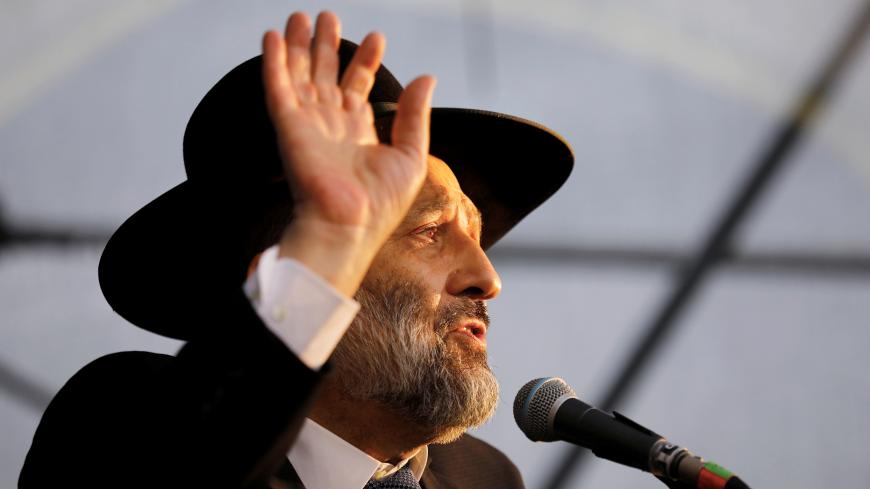 Israeli Interior Minister Aryeh Deri speaks during an annual pilgrimage to the gravesite of Moroccan-born sage and Jewish mystic Rabbi Yisrael Abuhatzeira, also known as the Baba Sali, on the anniversary of his death, Netivot, Israel, Jan. 9, 2019. - REUTERS/Amir Cohen

If it were up to Prime Minister Benjamin Netanyahu, Israel would have imposed its sovereignty over the settlements, and with them, 30% of the total West Bank territory, as offered by President Donald Trump’s peace plan even before the last Israeli election. However, in a last-minute twist, senior American advisers Jared Kushner and Jason Greenblatt intervened. They made it clear to the prime minister that that the United States would only agree to Israeli sovereignty after the territories were mapped out in full and a stable Israeli government was formed, splashing cold water on the plans of Netanyahu, the settlers and the political right.

Once they realized that their ability to impose sovereignty was limited by a formal government decision, ministers on the right initiated a series of moves that meant de facto annexation. They changed a government policy that limited and restrained their actions. Over the years, the US administration kept careful watch on such moves and prevented changes to the situation on the ground. The lack of any public reaction from the US administration to these recent moves suggests that they were coordinated between Israel and the United States.

Defense Minister Naftali Bennett was responsible for the most recent move. Bennet is chairman of Yamina, a right-wing faction of several smaller parties affiliated with the religious Zionist movement. On March 9 he approved a project he called the “Sovereignty Road." It involves the creation of a separate road for Palestinians living in Area E1 near Jerusalem connecting the village of al-Zaim, which lies next to the Ma’ale Adumim settlement, with the Palestinian villages of Anata, Hizmeh and al-Ram. The goal is to enable the movement of Palestinian vehicles without them crossing through the settlement bloc in the Ma’ale Adumim region, which will allow Israel to start construction on the separation fence planned around the Adumim bloc and begin building in the area.

E1 is 12 square kilometers (7.5 square miles) currently considered part of the municipality of Ma’ale Adumim. The land borders Jerusalem’s municipal boundary. Plans to build in the area date back to the Yitzak Rabin government, but they have been put on hold since 2005 for diplomatic reasons. The delays were the result of pressure from Western governments, first and foremost the United States. While this was particularly true during the administration of President Barak Obama, the Donald Trump administration had also insisted that no construction take place there, at least until the release of the plan. International and Palestinian criticism of plans for construction there complains that it would cut the northern West Bank off from the south and make it more difficult to establish a Palestinian state in the future.

If anyone had any doubts about his intentions, Bennett made them perfectly clear, saying, “Today, we are giving a green light to the Sovereignty Road and taking steps to connect Jerusalem with Ma’ale Adumim. The project will improve the quality of life for residents in the area, avoid unnecessary friction with the Palestinian population and most importantly, allow for continued construction. We’re applying sovereignty in deeds, not in words. We will continue doing this.”

The road project approval came about two weeks after Netanyahu's Feb. 25 announcement that he'd given orders to move ahead with the construction of 3,500 housing units in the area. Ma’ale Adumim Mayor Benny Kashriel responded, “This is huge news for the Israeli settlement enterprise in Judea, Samaria and the Jordan Valley, which has waited for over a decade and a half to get approval to commence construction in Area E1.”

Even before Bennett’s road project, Transportation Minister Bezalel Smotrich, a member of Bennett’s Yamina Party and a resident of the settlement of Kedumim, began planning a network of roads in the West Bank, to serve the settlements, including the most isolated ones. One of them is a stretch of road south of Nablus, circumventing the Palestinian town of Hawara, that was intended to connect Tapuah Junction with Yitzhar Junction and the settlements along the central ridge. The road is scheduled to be completed in 2023 at a cost of 260 million shekels ($73 million).

The change that Smotrich introduced is dramatic. Until now, the planning, development and paving of roads in the West Bank were handled by the Ministry of Defense, as were most other civil matters in the Palestinian territories. Upon taking over as transportation minister in the summer of 2019, Smotrich pushed for his ministry to take responsibility for roads in the West Bank. After his fellow party member Bennett was appointed defense minister and the Jan. 28 announcement of the peace plan, the obstacles were removed and the tractors hit the ground.

Smotrich’s staff told the Makor Rishon newspaper, “Part of the revolution that we are implementing in the handling of Judea and Samaria is to reset the criteria so that they are exactly the same as they are in ‘Little Israel,’ i.e., when budgets are put aside for roads and when they are not.”

The road circumventing Hawara is part of a comprehensive plan that includes three other major roads currently under construction. They are located in the Etzion settlement bloc, the western part of the Benjamin region and the bloc of settlements consisting of Kedumim, Karnei Shomron and Alfei Menashe.

While the Yamina ministers are busy with their projects, the Ministry of Tourism under the Likud's Yariv Levin has begun advancing the development of historical tourist attractions and nature reserves in the West Bank. Interior Minister Aryeh Deri of Shas has also joined the effort to effectively erase the Green Line by ordering that the local and regional authorities responsible for the settlements join his ministry’s project to regroup regional municipalities, conferring upon them the same status as municipalities within the Green Line. While in practice these moves involve technical issues such as garbage collection and education, the decision's political significance is huge. As Deri himself put it, the move is “an important step forward by Israel on the way to imposing sovereignty over the region.”

These steps are part of the Netanyahu government's efforts to establish facts on the ground. that will serve as an impediment for any future government considering territorial concessions to the Palestinians. They are effectively partial implementation of the Trump plan.

There has been very little opposition or even reaction in Israel to these moves, apart from responses by leftist groups like Peace Now, and there has been absolute silence from the United States. One senior political source told Al-Monitor that the United States is fully aware of some, if not all, of these steps. By failing to express opposition, it will empower Israel to continue with other measures. That theirs is a transition government has not prevented Israel's current ministers from taking action, saying that these are standard civil programs to meet the needs of the settlers who have been abandoned as a result of political and diplomatic roadblocks.