How Netanyahu is burying the two-state solution

If Prime Minister Benjamin Netanyahu ever had the common sense to leave room for a future agreement with the Palestinians, he buried it recently with his decision to build new housing units in Jewish east and south Jerusalem neighborhoods. 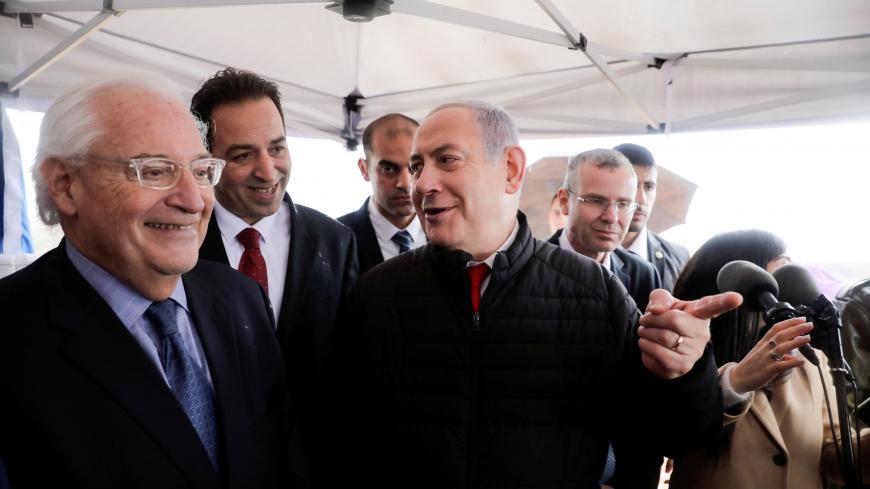 What hasn’t Prime Minister Benjamin Netanyahu promised voters in the last week before the election? He is offering a free year in college for anyone who completes military service or national service. He is willing to erase the criminal records of anyone charged with using cannabis. He is prepared to lower taxes and increase deregulation, and more. Among all these proposals, which may not have a chance of being fulfilled after March 2, there is one especially dramatic promise. This week, Netanyahu announced that he would lift the freeze on a plan to construct 3,500 new housing units in Area E1 between Jerusalem and the settlement town of Ma’ale Adumim. Earlier, Netanyahu announced that he had approved the expansion of the Har Homa neighborhood (2,000 housing units) as well as construction in Givat HaMatos (4,000 units).

What’s the difference between the housing units in these three areas and the wave of construction that occurred in the settlements throughout Netanyahu’s term in office? The answer can be found in remarks he made Feb. 20 while overlooking the Har Homa neighborhood. “I hereby announce the creation of Har Homa E. … It will be a neighborhood with 5,000 residents, just like a mid-sized city in Israel.” The strategic location of the Har Homa neighborhood in the south of Jerusalem, on the Palestinian side of the Green Line, as well as the two other neighborhoods, eliminates any chance of establishing a future Palestinian state, and kills the idea of a two-state solution. From now on, the only possible future on the table is annexation and a binational state.

In the years between his return to office in 2009 until just this week, Netanyahu has managed to withstand the pressure exerted on him by the settlers. He realized that any attempt to announce the commencement of construction in Area E1 or Givat HaMatos is a red line, and that crossing it would likely upset the international community. He wouldn’t dare make the smallest possible step toward building in the area, even after the Trump administration gave him a free hand to build in Jerusalem neighborhoods across the Green Line. Maybe he believed that he could tell the international community that he is still interested in a two-state solution but that, sticking to his script, there is no partner on the other side.

Given his current announcement on new construction in Givat HaMatos and Area E1, Netanyahu can no longer claim that he is willing to talk and that there is something to talk about. E1, for example, is a 12 square kilometer strip of land, which even Prime Minister Ariel Sharon, “Father of the Settlements,” avoided developing out of concern over the response of the US administration (under President George W. Bush). Construction in Area E1 would prevent the Palestinians from having a strip of territory connecting the West Bank to the Arab neighborhoods of East Jerusalem. Back in 2005, when Sharon only said half-heartedly that he still planned to connect Ma’ale Adumim to Jerusalem, he was immediately forced to provide a clarification to the White House. During his meeting with Bush in Texas that year, the president informed him that the United States opposes any construction that would prevent a permanent solution in the future.

Even Netanyahu promised President Barack Obama that he would avoid any unilateral steps in Area E1. Saeb Erekat, who was responsible for talks between the Palestinians and Israel, used to claim that Netanyahu made a secret promise to Obama that he would not build in that particular territory. In a press briefing in Washington after Palestinian President Mahmoud Abbas met with Obama in the White House  in June 2009, Erekat told reporters, “Obama said he got Israel to commit to stop construction in E1.” Two weeks later, Erekat added that Secretary of State Hillary Clinton gave the Palestinian Authority assurances that there would be no construction in E1. It is also worth noting that support for the idea that Netanyahu made such a promise was found in documents that were leaked to Al Jazeera at the time.

All of this underscores how sensitive the Bush and Obama administrations were to the topography of E1, and how they put all their efforts into avoiding any changes whatsoever in the territory. In the past, Israel did start to prepare the area for construction. The government paved new roads, put up street lights and even transferred the headquarters of the Judea and Samaria District of the Israel Police there. On the other hand, there has been no further development since 2005, when Secretary of State Condoleezza Rice issued a stern warning about it to Sharon. The same is true of Givat HaMatos.

Givat HaMatos, which lies between Jerusalem and Bethlehem, overlooks Jerusalem from the south. Sharon, when he had previously been housing minister, set up a temporary neighborhood of caravans on the site to house new immigrants, who arrived in the country with the breakup of the former Soviet Union. The caravans have since been evacuated, and the hill has been left empty. In 2014, a new plan was raised to build a Jewish neighborhood there, in order to isolate the Arab neighborhoods of Beit Safafa and Sharafat from the other Arab neighborhoods of East Jerusalem and block a land bridge connecting Bethlehem and Jerusalem. Then the Obama administration vetoed the idea. It is interesting to note that Netanyahu, who had no qualms about fighting with the US president on other issues, didn’t contest this veto and stopped the planning from proceeding.

So what changed now? Netanyahu is caught in a fight for every vote. He is struggling with every last bit of strength to win the 61 seats that could save him from standing trial on criminal offenses and ensure him at least one more term in office. With his personal future at stake, he is prepared to build in places he avoided for so many years. It’s not a matter of ideology. If it was, he would have pushed to build in those neighborhoods ages ago.

There is a psychological issue with putting a final end to the idea of Palestinian territorial integrity. It was once a red line for Netanyahu. He never crossed it himself, nor would he let anyone else cross it. During all his years in office, he gave the settlers every mountain and hill that they could ever want, along with vast sums of money to expand their settlements. He made the transition from the principles he espoused in his Bar Ilan speech, with its commitment to the idea of a two-state solution, to a plan for wide-scale annexation of Palestinian territories. He let the settlers drag him along by the nose and veered to the right of Yamina leader and Defense Minister Naftali Bennett himself when Netanyahu thought that Bennett might steal votes from him. And yet, despite all that, Netanyahu was careful not to cross the red lines surrounding Givat HaMatos and Area E1 — at least until now.

If Netanyahu ever had the common sense to leave any room whatsoever for a future agreement with the Palestinians, he is now burying it. With President Donald Trump busy preparing for the presidential election in the United States and the rest of the world panicked by the coronavirus, Netanyahu comes along and flips them off. He cares little about what the international community has to say, and he cares little about the future of his own citizens, the same ones who wouldn’t let him form a government after the last two elections.