The plans for a new Jewish neighborhood in East Jerusalem will preclude any possibility of a territorial solution along the lines of the Clinton Parameters and render those proposals for Israeli-Palestinian peace null and void, writes Akiva Eldar 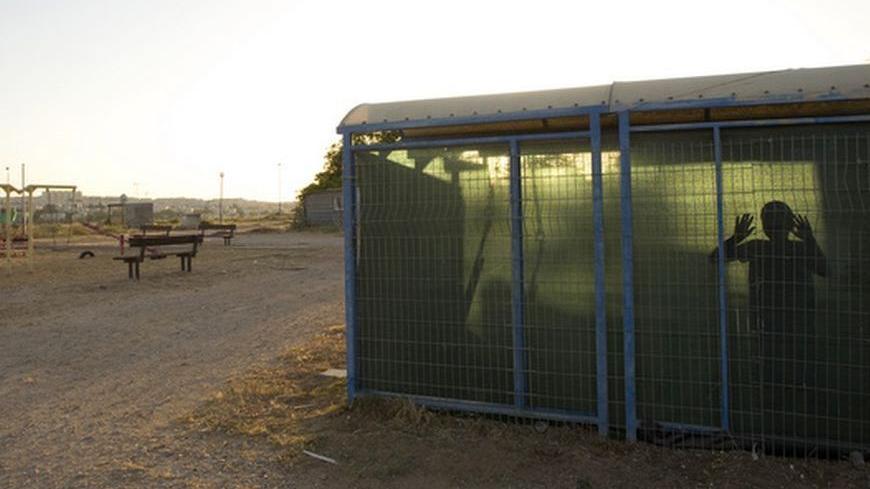 The silhouette of an Israeli boy is seen as he looks out from his home in Givat HaMatos on the southern fringes of Jerusalem's city limits May 17, 2012. - REUTERS/Ronen Zvulun

While Bethlehem prepares for the Christmas festivities, the city council of Jerusalem is set to endorse the establishment of a controversial new neighborhood that would constitute a buffer between Bethlehem and Jerusalem. Next Wednesday, Dec. 19, the Local Committee for Planning and Construction of Jerusalem’s municipality is to put the final seal of approval on the plan for the establishment of stage A of the Givat HaMatos neighborhood, at the southern outskirts of the city. The committee was scheduled to approve the plan on Nov. 21; however, under the pressure exerted by international elements and in consideration of the visit to Jerusalem of US Secretary of State Hillary Clinton, who came to the region in the framework of the efforts to reach a cease-fire with Hamas, the plan was removed from the agenda. Not for long; its final approval is expected this week already, or immediately afterward.

It will be the first time in 15 years that Israel is building a new neighborhood in East Jerusalem. The resolution passed by the first Netanyahu government in 1997 to set up the Har Homa neighborhood — which physically separates Jerusalem from Bethlehem — at the time sparked strong opposition on the part of the Palestinians and a series of condemnations by the Western world and the Arab league. The plan for the Givat HaMatos neighborhood is at a far more advanced phase than the plan for the establishment of a Jewish neighborhood in the E1 area in the West Bank between Ma'ale Edomin settlement and East Jerusalem and which is designed to cut off the northern part of the West Bank from the south.

The same as the E1 settlement, the Givat HaMatos neighborhood is not just another detrimental settlement, but rather a move that is liable to significantly change the rules of the game. Thus, under the present circumstances, the 2000 Clinton Parameters may still be implemented in the area extending south of Jerusalem — this, by applying Palestinian sovereignty over the Palestinian neighborhoods and retaining the Jewish settlements under Israeli sovereignty. Once the planned neighborhood, or more precisely, settlement of Givat HaMatos is set up, the Palestinian neighborhoods of Beit Safafa and Sharafat in East Jerusalem will be encircled on all sides by Jewish settlements in a manner that will preclude any possibility of a territorial solution along the lines of the Clinton Parameters and render his proposal for Israeli-Palestinian peace null and void.

Daniel Seidemann, who heads the Terrestrial Jerusalem organization, told Al-Monitor that the Givat HaMatos plan was the “silent killer” of any peace agreement between Israel and the Palestinians, as it thwarted any potential arrangement under which the neighborhoods of Beit Safafa and Sharafat, which were annexed to Israel following the 1967 Six-Day War, would be included in the Palestinian state, once established.

Ofran quotes a member of the Jerusalem Regional Committee for Planning who told her that it is the first time in at least eight years that a Committee for Completion of Plans is established in the Jerusalem district. "It seems to me that there are forces within the government that are trying to push forward as many plans as possible in East Jerusalem before the election in Israel," added Ofran. "All this in order to set as many facts on the ground before any political change takes place, and are using this rare procedure in order to do so".

Seidemann told Al-Monitor that the deposit of the Givat Hamatos plan comes on the heels of a similar step taken regarding the Gilo settlement neighborhood nearby. On Sept. 27, 2011, the Mordot Gilo South Plan (No. 13261), which provides for the construction of 780-1380 units, was approved for public review. "The steps taken to expedite these two plans are not taking place in isolation," adds Seidemann. "They are part of a series of plans that create an Israeli settlement buffer between East Jerusalem and Bethlehem and jeopardize the very possibility of the two-state solution. Construction at some of these sites has already commenced, or only awaits the publication of tenders: Approximately 620 units are under construction in East Talpiyot. Construction is underway, or the publication of tenders is expected shortly, regarding approximately 1483 new units at Har Homa B & C. Some of these plans are in the advanced planning stages."

Unlike the E1 area, which is for the most part located in the West Bank, outside the municipal area of Jerusalem, Givat HaMatos is considered a part of Jerusalem. Givat HaMatos, Ramat Shmuel and the slopes of Gilo are all included in the municipal area of the capital of Israel — having been annexed to Israel by the Alignment government, and they thus enjoy consensus in Israeli society.

Prime Minister Benjamin Netanyahu may therefore assume that the Labor party and the center parties will find it difficult to condemn any decision to advance construction for Jews in these areas. At the same time, he is most likely concerned that opposition to these projects would play into the hands of the National Unity, the Jewish Home and Otzma LeYisrael, which are all three extremist nationalist parties, politically situated to the right of the Likud Beiteinu.

Akiva Eldar is a political analyst and the author of bestselling books on Israel, the settlers and the Palestinians, and on US-Israeli relations.