Dalia Hatuqa writes that the expansion of Israeli settlements in and around Jerusalem does not bode well for the Holy City in the coming year. 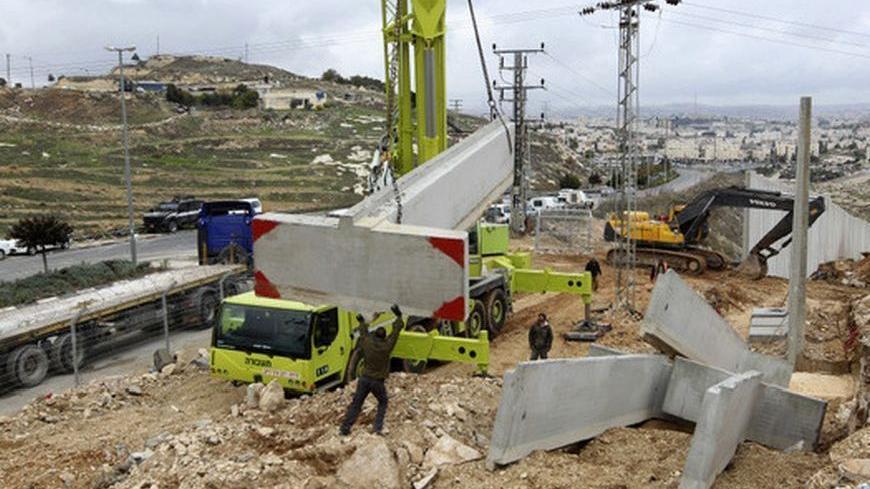 A crane lifts a concrete block for the construction of a section of the controversial Israeli barrier in Shuafat refugee camp in the West Bank near Jerusalem, on Dec. 5, 2012. Israel moved forward on Wednesday with plans to build some 3,000 settler homes in one of the most sensitive areas of the occupied West Bank, the E1 corridor near Jerusalem, in defiance of international protests. - REUTERS/Ammar Awad

With settlements being built in a flurry in and around Jerusalem, and Palestinians still getting evicted from their homes in the flash-point neighborhood of Sheikh Jarrah, the holy city is off to a bleak start.

Despite several feats, such as the UN status upgrade to non-permanent observer state, 2012 was disastrous for Palestinians. By the end of December, Israel had announced a series of settlement expansion plans that reaffirmed its opposition to ceding any parts of Jerusalem to the Palestinians in any future agreement.

First there was the announcement that E1, an area stretching from northeast Jerusalem, to the western parts of Ma’ale Adumim, would be flooded with settlements. Ma’aleh Adumim is a large settlement bloc overlooking a highway deemed a main artery leading to the Dead Sea and beyond to neighboring Jordan.

Built to parallel planned suburban communities in the United States, the settlers of this gargantuan settlement with the red rooftops and palm trees have long been promised by Israeli leaders that they would be part of the Israeli state in any future agreement with the Palestinians.

If E1 is built, that stretch of land would link this third-largest settlement in the West Bank to Jerusalem, effectively blocking off the corridor that would connect the southern and northern parts of the West Bank. It would also sever East Jerusalem from the rest of the West Bank, and with that banishing any hopes of having it become the capital of any future Palestinian state.

Today there are more than 200,000 Israeli settlers living in East Jerusalem — that number goes up to half a million if you include the rest of the West Bank. Judging by the scale and pace of this new wave of settlement building, the Israeli government is looking to make as many changes on the ground before a political settlement is reached with the Palestinians. In the words of Israeli settlement expert Daniel Seidemann, “Givat Hamatos is clearly a game changer — it is highly detrimental to the possibility of any kind of political agreement. E1 is very much in your face but they’re both very problematic.”

Even the committee convened to discuss settlement building in certain areas (Jerusalem’s planning and construction committee) “is only established in rare occasions, and it is meant to promote plans that are ‘stuck’ in the pipeline for too long,” according to Peace Now, suggesting that Netanyahu is trying to fast-track settlement building in the Jerusalem area specifically.

At the heels of the East Jerusalem settlement expansion plans came other announcements that more than 1,200 units would be built in the settlement of Gilo in Bethlehem (an expansion spanning some 66 acres). Israel’s Channel 2 meanwhile reported that the Israeli housing ministry is expected to issue tenders for hundreds of units in the West Bank settlements of Efrat, Karnei Shomron and Givat Ze’ev.

With the Gilo announcement, Israel will have pushed for plans to build more than 6,600 new settlement units in just over a week, the largest flurry of expansion proposals in recent memory. That number does not include the 3,000 new units in various West Bank settlements and the E1 corridor.

This settlement expansion has drawn an unprecedented series of criticism from many European Union states and even a rare rebuke from the United States. But despite this, Israel has continued to streamline expansion plans at a time when the Israeli media is reporting that Benjamin Netanyahu is under pressure from members of his Likud party to drop a verbal commitment he made (in a 2009 speech) to a two-state solution from its January election platform.

Albeit for different reasons, some Israelis and Palestinians are warning that these changes being made to Jerusalem will render partition in any future deal impossible. The holy city and its environs will become part of Israel, drawing it closer to a bi-national state. And unless a one-man, one-vote system is implemented, a selective democracy based upon racial and ethnic lines will come into place.

Settlers in the heart of the city

While Israeli plans are being made to encircle Jerusalem with settlements, steps are also being taken to create settler enclaves in the heart of the city’s Palestinian neighborhoods. In Sheikh Jarrah, north of the Old City, the Shamasneh family is facing eviction from its 50 square meter (164 square feet) home. Following a three-year lull, Israeli authorities first gave the 10-member family until December 31 to leave its home, which will be turned over to a settler organization. An appeal has been submitted to the court and a response to be received on March 1 has postponed the imminent eviction and the family awaits a ruling to determine its fate.

Depending on the court ruling, the Shamasnehs, six of whom are children, will be forced to leave the house inhabited by generations of their family since 1964. A court ruling in favor of the Shamasnehs is unlikely. Other families in the area have been met with a similar fate: In 2008, the Al-Kurd family was evicted from their Sheikh Jarrah home, followed by two other Palestinian families in 2009. All of the houses are currently occupied by Israeli settlers.

For years, Sheikh Jarrah has been a flash point between Israeli authorities and Palestinian homeowners fighting to stay in their homes, which Jewish groups lay claim to citing pre-1948 ownership. The irony lies in the fact that Palestinians driven from their homes during the same time period cannot claim the same right.

Residents of the Old City and Silwan are also particularly at risk of forced displacement. In addition to the threat of house evictions, Israeli authorities have built up many national parks with archaeological and educational sites designed to include Israelis and limit access to Palestinians. An example of this is the City of David, an archaeological site with a museum, built in the middle of Silwan.

The UN Office for the Coordination of Humanitarian Affairs (OCHA) notes that “settler organizations are targeting land and property to create an ‘inner’ layer of settlements within the ‘Holy Basin’ area. The impact includes … restrictions on public space, residential growth and freedom of movement.”

According to OCHA, Israeli measures have altered the status of East Jerusalem and its Palestinian population, which continue to be denied equal access to basic services and the ability to plan and develop their communities. Since 1967, 2,000 houses have been demolished and more than 14,000 Palestinians have had their Jerusalem residency revoked.

Meanwhile, the separation wall has forced many Palestinians to live in enclaves within the city to which even the Jerusalem municipality does not want to provide services. Many families have found themselves on the "West Bank side" of the wall, forced there by economic and bureaucratic needs, compelled to cross military checkpoints on a daily basis for access to health care, education and their livelihoods. This has created virtual slums in Jerusalem that the Palestinian Authority is not authorized to access and which the Israeli authorities refuse to provide services for, leaving residents to fend for themselves.

Hemmed in by settlements and isolated by the wall, some of Jerusalem’s Palestinians have been forced to divert the political and social aspects of their life to the nearest urban hub — the West Bank city of Ramallah. The Israeli measures taken are changing Jerusalem’s landscape and demography, and will no doubt define any potential division of the city in any future negotiations. Meanwhile, the clock is ticking for the Shamasneh family and many others like them, victims of the last vestige of Israel’s ‘Greater Jerusalem’ project. Imaginary negotiations on the partition of this place seem light years away from this family’s reality, as they may find themselves homeless in the new year.