Israel has intensified its demolition push in East Jerusalem to support development of a "Greater Jerusalem," reports Dalia Hatuqa. 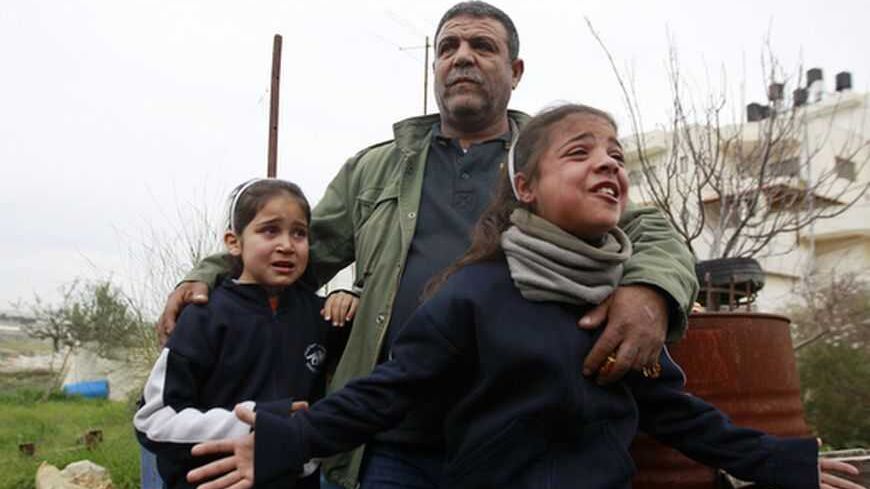 Dina (R), a 9-year-old Palestinian girl, cries as her father, Saleh Kostero, puts his arms around her and her cousin Halla (L) during the demolition of their house in the East Jerusalem neighborhood of Beit Hanina, Feb. 5, 2013. - REUTERS/Ammar Awad

As Israel’s aggressive plan to place settlers in and around East Jerusalem pushes forward, Palestinian residents are finding their communities quickly being eroded by bureaucratic policies. Home demolitions and evictions carried out by Israeli authorities are some of the most common methods that displace Palestinians. In addition to these measures, settler enclaves are being forced into the heart of Palestinian neighborhoods — such as Sheikh Jarrah, Silwan, At-Tur (Mount of Olives) and others that comprise what’s known as the "Holy Basin" — isolating them from one another and from the rest of the West Bank. Today, these neighborhoods are unable to expand or grow in a way that ensures contiguity and Palestinians living there are forced to build “illegally” because construction permits are rarely granted.

“Since 1967, no new Palestinian neighborhoods have been established; the urban master plan restricts Palestinian building to 13% of the city, much of which is already covered with chaotic, unregulated sprawl. This is despite the quadrupling of the Palestinian population, which today constitutes 36% of Jerusalem's population,” according to Robert Blecher, director of the Israel-Palestine Project at International Crisis Group.

The two neighborhoods of Beit Hanina and Beit Safafa offer a view into the Jerusalem municipal authorities’ ongoing policy to replace Palestinians with settlers. April 2012 marked the first forced eviction of a Palestinian family living in the neighborhood of Beit Hanina, located in the northern section of east Jerusalem. Until recently, residents here had been spared the evictions and demolitions used to forcibly facilitate the entry of Jewish Israeli settlers into their community. The stories told in the aftermath of these tragedies are usually very similar: Jerusalem municipality workers, backed by Israeli soldiers, seal off the area and a bulldozer makes its way toward the houses, demolishing them without much notice.

A year ago, the Natsheh family of 11 found itself on the street after their home was handed over to Israeli settlers. The legal process that paved the way for this action was kick-started by Aryeh King, a pro-settler activist and head of “The Israel Lands Fund,” which, according to its website, “strives to ensure that Jewish land is once again reclaimed and in Jewish hands.” An Israeli court ruled that the Natshehs couldn’t prove that their family owned the house before 1948. As in most previous cases of evictions carried by Israeli authorities, the Natshehs were forced to leave their house early in the morning, their belongings bundled into a moving van as the family’s male members were detained by police until the eviction was complete.

Last week, four Palestinian families, including the Al Kiswanis and Casteros, suffered this very same fate when their two-story house was demolished. The Jerusalem Municipality’s formal reasons for carrying out the demolition was the lack of building permits, though such permits are few and far between. The demolition took place quickly and therefore, like many before them, the families could not salvage much of their belongings before the house was torn down. A picture of a boy crying profusely while sitting on the remnants of the demolished home has gone viral. The boy came back from school to find that his house was gone. Later, pictures circulated on social-networking sites showing his family weeping as they gazed at the pile of rubble. More than 30 people were rendered homeless.

Evictions and home demolitions in Beit Hanina and other Palestinian neighborhoods most often take place under the guise of tearing down structures built illegally. However, as previously mentioned, building permits are extremely difficult to obtain from the Israeli authorities. According to the Israeli NGO BIMKOM, “The average number of demolition orders issued each year [in east Jerusalem] was nearly half the number of building permits issued. For every 2.3 building permits the municipality delivered for a building in East Jerusalem, it issued one demolition order.”

Beit Safafa, located near Bethlehem on the southern edge of east Jerusalem and divided by the Green Line, has also become an important locus in Israel’s efforts to create a “Greater Jerusalem.” Though the neighborhood does not contain any settler enclaves, residents have historically prided themselves on their close relations with their Jewish neighbors. However, since plans were unveiled to construct a high-speed motorway through their community, residents say they have been collectively punished since they started protesting the construction that would effectively dissect the village. To ease the travel of settlers from the southern West Bank to Jerusalem and Tel Aviv, authorities have decided to erect a multi-lane highway through the village. Aluminum “walls” have already been set up to protect the work, which will mean damaging ancient olive groves and cutting residents off from their neighbors, jobs and shops. Since a petition by the villages’ residents to the Jerusalem District Court was rejected, plans have been made to take their case to the Supreme Court.

But meanwhile, construction is underway, with some houses slated to be left barely three meters from what will become a major traffic artery serving the settlers of Gush Etzion and Gilo. Residents say that the Jerusalem Municipality has been taking measures to crack down on their protests, including a hike in the number of visits by tax authorities and increases in the number of fines for “illegal construction,” arrests and detentions.

Ziad Al-Hammouri, head of the Jerusalem Center for Social and Economic Rights, told Al-Monitor’s Jillian Kestler-D’Amours that the idea behind the highway is to annex the settlements to east Jerusalem.

“The target [is] to have minimum Palestinians in east Jerusalem, maximum settlers. [Israel is] talking about having in the near future more than 300,000 new settlers on east Jerusalem lands. They are trying to connect all these settlements together to have a circle around Jerusalem.”

Further to this annexation, Beit Safafa is also being threatened by the recent authorization of plans to build the first settlement in Jerusalem since 1997. The colony, known as Givat HaMatos, will complete the ring of settlements that will effectively isolate Beit Safafa from its Palestinian hinterland. The 1,400 new units will also sever Jerusalem from neighboring Bethlehem, completing the series of settlements isolating east Jerusalem from the West Bank.

The eastern part of the city is currently flooded with more than 200,000 settlers, according to the UN Office for the Coordination of Humanitarian Affairs. Of these, 2,000 live in enclaves within Palestinian neighborhoods. In December, the United Nations Security Council (with the exception of the United States) condemned Israel’s plans to expand settlements. One month later, the world body’s Human Rights Council said Israel must cease expansion plans and remove all West Bank settlers, adding that these practices could be considered war crimes.