Residents of the east Jerusalem neighborhood of Beit Safafa are protesting Israeli plans to build a highway through the heart of their village, Jillian Kestler-D'Amours reports. 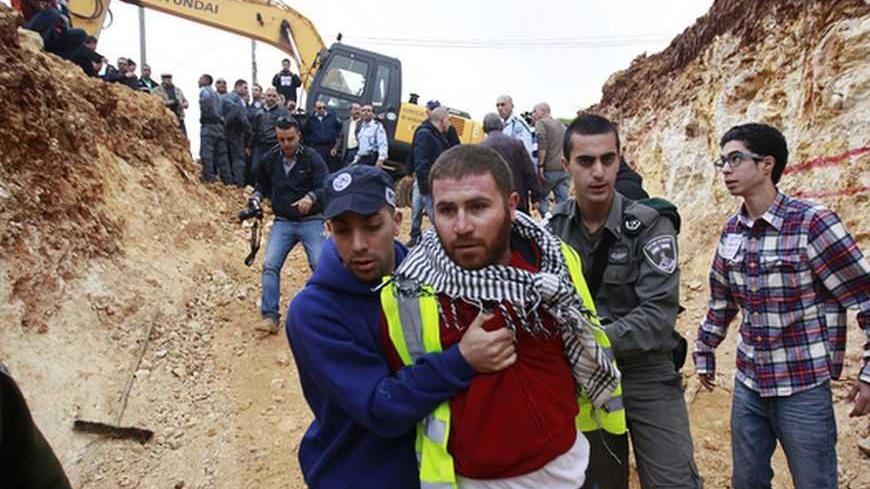 A plainclothes Israeli policeman (L) detains a Palestinian protester during a demonstration against Israel's construction of a road in the Arab neighborhood of Beit Safafa in Jerusalem Feb. 10, 2013. - REUTERS/Ammar Awad

BEIT SAFAFA, EAST JERUSALEM — Shouting “No, no, no to Road 4” and walking hand in hand, hundreds of Palestinian children, men and women poured into a fenced-in Israeli construction site in Beit Safafa Sunday, Feb. 10 in protest of an Israeli roadway residents say will destroy their village.

“Everything is going to be changed. It’s not going to be the same Beit Safafa I know, so of course I’m going to be against it because it’s not logical,” said 25-year-old resident and protest organizer Duaa Subhi. “It will be like the separation wall in the West Bank, but inside the village.”

The Jerusalem municipality plans to build a six-lane highway — known as both Road 4 and the Begin Highway — through the East Jerusalem neighborhood of Beit Safafa. The road would effectively divide the village into two parts and cut residents off from shops, the mosque, schools and most importantly, each other.

“They are planning to finish this street by the end of the year. Every day we can see trucks passing. They are creating huge traffic inside the village,” Subhi told Al-Monitor, in front of a protest tent that has been erected against the road. “Lots of kids have problems getting to school. Even the streets are dirty because of the trucks that are moving all the time. [There is] noise of the building and the construction.”

On Sunday, residents succeeded in getting two bulldozer operators to abandon their vehicles and their work in the area. Israeli border police, municipal police and undercover officers aggressively dispersed the group, however, and three people were arrested.

Ahmed Tibi, a Palestinian member of the Israeli parliament, also joined the demonstration. “I am sure that incremental resistance and protest will achieve its objective. We will win in the end, and I am sure of that,” he told reporters.

The road through Beit Safafa is based on a plan first proposed by the Jerusalem municipality in the early 1990s. Now expected to be three lanes wide in each direction, the road will cut the traditional farming village in two, and necessitates the confiscation of much of the already overcrowded neighborhood’s land.

The municipality says underpasses and bridges will be built to allow residents to easily move to and from their homes. The road has “a high economic value,” the city also said, according to Israeli daily Haaretz.

But Beit Safafa residents will not be able to access the road from inside the neighborhood. Instead, the road will serve Israeli settlers traveling between the Gush Etzion settlement bloc in the south of the occupied West Bank, and Jerusalem and Tel Aviv.

“They are trying to do an annexation of these settlements,” Ziad Al-Hammouri, head of the Jerusalem Center for Social and Economic Rights, told Al-Monitor.

“The target [is] to have minimum Palestinians in East Jerusalem, maximum settlers. [Israel is] talking about having in the near future more than 300,000 new settlers on east Jerusalem lands. They are trying [with Road 4] to connect all these settlements together to have a circle around Jerusalem,” Al-Hammouri explained.

For 39-year-old Beit Safafa resident Ala Salman, the threat the road poses is clear: His family’s home overlooks the future span and they will eventually be cut off from their neighbors. Concerned by accelerated construction last month, Salman helped mobilize local residents against the plan and organized frequent protests.

The residents also submitted a court petition against the Jerusalem municipality to stop the road’s construction. On Sunday, the petition was rejected at the district court in Jerusalem. Salman said, however, that they would now appeal to Israel’s Supreme Court.

“I think all the work we are doing now is very good. All the people are coming and sharing in the struggle. We want all the people to get out to the streets,” he told Al-Monitor.

According to Aviv Tatarsky, a field researcher with Jerusalem-based human rights group Ir Amim, the municipality never submitted a detailed plan for the portion of the road passing through Beit Safafa.

As a result, residents were never given a chance to submit objections to the proposal, a step that is normally integral in the city’s procedures for such a project. Tatarsky also told Al-Monitor that the municipality argued in court that since construction has already begun, and money has been poured into the plan, the work couldn’t be stopped.

“On the one hand, you can say since there’s a good chance that the municipality will lose the case, why is it throwing away money recklessly? And on the other hand, they might be using exactly that point in order to influence the judges,” Tatarsky said.

“You can envision a scenario where the Supreme Court is hesitant about what to decide, and the municipality says, 'look how much work has been done and money has been spent.'”

Mohammed Jadallah vividly remembers leading the struggle against the very same road through Beit Safafa over 20 years ago. “My memory is still fresh to tell you about every single day,” the 71-year-old told Al-Monitor.

In the early 1990s, Jadallah and other residents of Beit Safafa set up a protest tent and engaged in acts of civil disobedience, including standing directly in front of Israeli bulldozers for 72 days. Political and diplomatic pressure on then-Israeli Prime Minister Yitzhak Rabin, Jadallah said, helped freeze the project.

Today, the highway will cross four parcels of his family’s land. One of the bridges over the road will also cut between two homes owned by his son.

“They are cutting pieces from my own flesh,” Jadallah said. “They don’t leave you to live, to be able to sleep properly, to eat properly, to think properly. You are under pressure, under pain, with pain, 24 hours a day. Not only you, but all your family.”

He added, however, that seeing the younger generations take up the struggle against Israeli occupation policies in Beit Safafa has been inspiring.

“We feel great, and we feel proud of ourselves because we fight. To lose a battle while you are fighting is different from losing while you are behind your own doors.”

Upon Israel’s creation in 1948, and after the forced expulsion of approximately 750,000 Palestinians from their homes in the Palestinian nakba (catastrophe), Beit Safafa was divided into two parts: one controlled by the newly-formed Israeli government, and the other under Jordanian jurisdiction.

The village was finally reunified in 1967, after Israel began its now decades-long occupation of the West Bank and East Jerusalem.

For activist Duaa Subhi, making sure Beit Safafa isn’t once again divided is what today’s struggle against the highway is all about.

“People were saying it was really inhumane, and it really separated people and it was a very sad thing. So we don’t want it to happen again,” she said. “This young generation will stop it, so we can stay as one community, one village, together.”