Did Netanyahu miss out on a 'Golan-Iran' deal?

Israeli sources claim that after the Iran deal was negotiated, Prime Minister Benjamin Netanyahu missed out on a historic opportunity to strike a deal on the Golan. 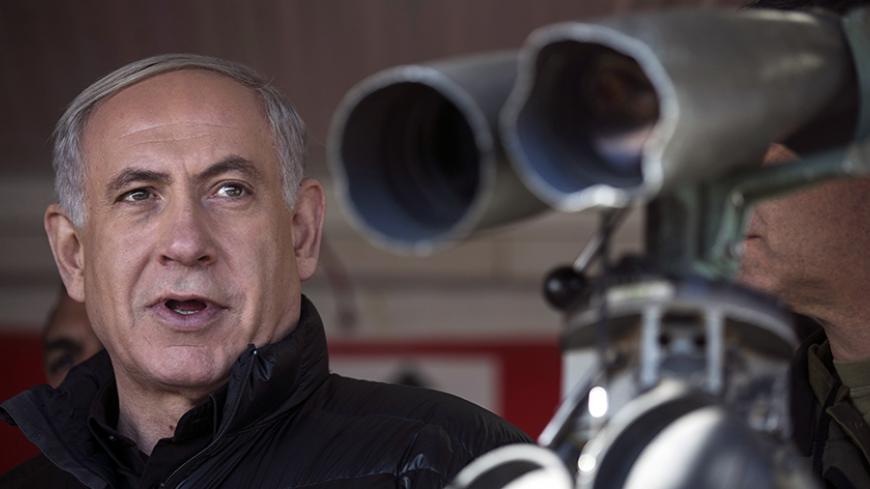 Roughly 10 days have passed since Prime Minister Benjamin Netanyahu and his ministers held a festive Cabinet meeting in the Golan Heights on April 17, declaring that Israel would never give up the area and would remain there for eternity.

Words galore in many languages have been written since that dramatic move, which marked the launch of an orchestrated campaign by Netanyahu in a bid to convince top world leaders of the new reality: that there is no alternative but to cement Israel’s control of the Golan Heights.

Netanyahu contends that while Syria is being torn asunder by various jihadi factions and chaos reigns supreme, demanding that Israel return the Golan to the Damascus regime is unreal. The prime minister made several phone calls to several world leaders, including US Secretary of State John Kerry. On April 21, Netanyahu even traveled to Moscow to present his position to Russian President Vladimir Putin. “The Golan is Israel’s ‘red line,’” he asserted in all those talks, noting that those demanding Israel return it to Syria are ignoring reality.

But it turns out that the only person who was ignoring reality was none other than the Israeli premier himself. Within 48 hours, almost all of those world leaders declared the Golan Heights to be occupied territory. The United States, Germany, Russia, the European Union and others all stated that they did not recognize Israel’s control of the Golan Heights and the only recognized border was the Green Line. The international community has rejected Israel’s attempt to take advantage of the current situation in order to annex territories it seized during the 1967 Six-Day War.

According to that version, Netanyahu was presented with such an opportunity following the signing of the nuclear deal in July of last year between the world powers and Iran in Vienna. In May 2015, Al-Monitor revealed that the Americans proposed to Netanyahu to stop his campaign against the nuclear agreement and enter negotiations with them for an upgraded and very generous “compensation package” that would allow Israel to maintain its qualitative edge and strategic position in the region. The Americans explained — to yours truly as well — that what they would be willing to offer Netanyahu would be much more if he buried the hatchet instead of continuing his pointless struggle.

Yet Netanyahu chose to discount the American offer, bluntly refusing to enter negotiations with the Obama administration. Instead, he continued to fight the nuclear deal until the bottom of the last inning, believing that he stood a chance of beating the US president in Congress. “I have no intention of letting the Americans buy my soul for beads. I have no intention of compromising my principles,” Netanyahu told an official who tried to convince him to look at reality with a fresh viewpoint, according to a senior diplomatic source who spoke to Al-Monitor on condition of anonymity.

As the story goes, Netanyahu could have obtained from President Barack Obama a vague American recognition of the prevailing situation in the Golan Heights “in view of the events on the ground” or “the new reality,” a diplomatic source told Al-Monitor. This would have been along the lines of the letters President George W. Bush gave Israeli Prime Minister Ariel Sharon in April 2004, which included some sort of an American recognition of the Israeli settlement blocs in the territories.

“There was an auspicious moment in Washington,” a senior Israeli diplomatic official told Al-Monitor on condition of anonymity. “We could have mended fences with Obama and reached a formula we could all agree on. It also would have made sense,” he added. “After all, everyone was clear on the fact that the nuclear deal exacerbated the risks to Israel on the northern front. It would not have been unreasonable, therefore, for the Americans to understand that at that point Israel could not be expected to withdraw from the strategic Golan Heights.” But Netanyahu would not hear any of it. He insisted on pursuing his hopeless fight against the agreement so as not to go down in history as the person who said “aye” to the evil agreement.

Today, he finds himself in a desperate situation. The defense aid agreement between Israel and the United States for the next 10 years is bogged down. The administration is offering to give less than what Israel is asking for. As for the Golan Heights, no one is willing to either listen to or understand the Israeli position.

“I must admit that [at the time] I thought Netanyahu was right,” one of the Cabinet members told Al-Monitor on condition of anonymity. “Today I’m inclined to understand it was a mistake. Although it sounds like I'm a Monday morning quarterback, the fact remains that the nuclear deal most probably could not have been averted, whereas Israel’s strategic position could very well have been improved.”

We need to bear in mind that despite his resolute statements concerning the Golan Heights about 10 days ago, Netanyahu actually negotiated with the Syrians, on two occasions, for an Israeli withdrawal in return for peace. The first instance occurred during Netanyahu’s first term (1996-1999) when his envoy, the billionaire Ron Lauder, held talks with the late Syrian President Hafez al-Assad.

Netanyahu did not forsake the idea, resuming negotiations with the Syrians when he returned to power in 2009. Back then the broker was the American envoy Fred Hof, who was assisted by Dennis Ross, a senior White House adviser. Shuttling between Damascus and Jerusalem, Hof held at least one long meeting with President Bashar al-Assad. Again, Netanyahu expressed his agreement to pull out of the Golan Heights.

Although the border itself was not finalized, the principle was. Netanyahu’s team started working on the maps and historic archives, while also carefully studying the previous negotiations held between former Prime Minister Ehud Olmert and the Syrian president. But then the Syrian revolt broke out and Netanyahu seized the opportunity to cut the talks. By the skin of his teeth, he was spared from having to sign a historic agreement with Assad before Syria was torn to pieces and engulfed in flames.

The little Netanyahu can do right now is to pursue the current Israeli policy that has prudently kept the Golan out of the heat of battle. Israel has already made clear that it would not take lying down an arrangement in Syria that would compromise its strategic or security interests. “We won’t come to terms with a situation whereby Iran or Hezbollah will turn the Golan into a second front against Israel,” a security official quoting Defense Minister Moshe (Bogie) Ya’alon told Al-Monitor on condition of anonymity. What will happen if this is exactly what transpires soon? What will Israel do then? That question he left unanswered.