Israel should back Mahmoud Abbas to deter ISIS

While the United States and Europe try to strengthen moderate Arab countries as a counterbalance to global jihad extremists in Iraq and elsewhere, Israel continues to diminish moderate Palestinian President Mahmoud Abbas. 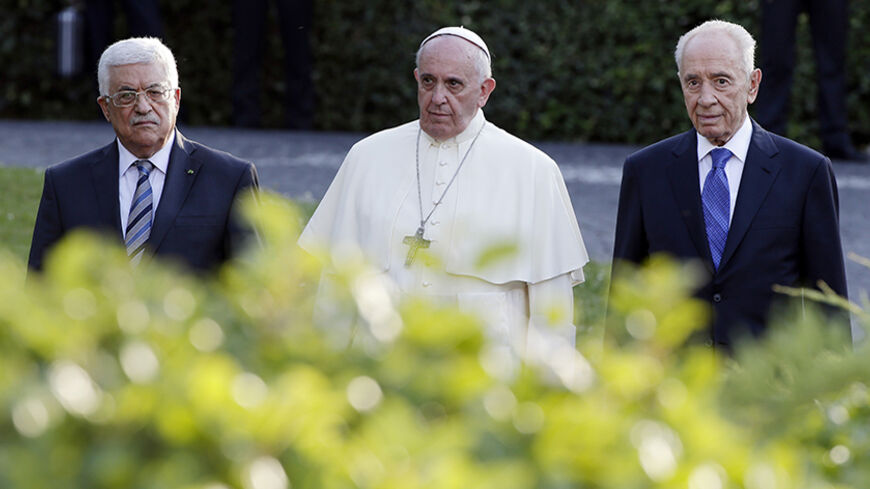 The takeover of western and northwestern Iraq by the Islamic State of Iraq and al-Sham (ISIS) and its entrenchment in northwest Syria are turning the Syrian-Iraqi arena into the main combat zone between Sunni radicalism and Shiite radicalism in the Muslim world. At this stage it’s hard to assess whether ISIS will manage to govern the extensive regions it has taken over, or whether Iranian intervention and perhaps even involvement by Hezbollah will manage to block this extreme Sunni faction. Either way, the region is now on a slippery abyssal slope. The jihadist extremists exploited the weakness of the central governments in their failing and divided states.

One does not need a particularly rich imagination to guess the implications of an ISIS takeover of one of the many holy Shiite sites along the length and breadth of Iraq, and what a god-awful tumult will ensue if ISIS fighters destroy the sacred Shiite site at Samarra, as extremists did in 2006 triggering the Iraqi civil war. Samarra may hold additional significance for ISIS as the birthplace of the organization’s leader, Abu Bakr al-Baghdadi, and is a stone’s throw from the area controlled by his forces.

ISIS is riding the wave of the stinging failure of the Muslim Brotherhood in governing Egypt, Tunisia and Gaza. In Syria, too, the global jihad has pushed the Muslim Brotherhood into a corner. Middle East scholar Matti Steinberg pointed out to Al-Monitor that the Arabic name of the “Regional Islamic Caliphate,” which global jihad wishes to establish, includes the term “Iraq and al-Sham,” which incorporates not just Iraq, Syria and Lebanon, but Jordan and Palestine as well.

Researchers at the Institute for National Strategic Studies point to Jordan, Israel’s immediate neighbor, as being one of ISIS's next targets. The commander of the ISIS forces in the Iraqi city of Mosul has announced his intention to invade Jordan and eliminate King Abdullah II. Jihad organization activists are infiltrating Jordan en masse under the cover of waves of refugees and along the supply and aid routes for the Syrian rebels that run through Jordan. Some million Syrian and hundreds of thousands of Iraqi refugees are forming an economic and demographic pressure cooker that threatens to explode at any moment all over the royal house.

The institute's senior researchers warn that if the global jihad takes control of Jordan, it could reach the West Bank and the Sinai Peninsula and from there penetrate Israel. Indeed, an al-Qaeda/global jihad cell from East Jerusalem and Jenin planned to hook up this year with the organization’s militants in Syria to carry out suicide attacks in Jerusalem and Tel Aviv. The researchers also point to the threat to Israel from Jabhat al-Nusra, whose people are active along the border with Jordan as well as on the Syrian Golan Heights alongside the Islamic Front fighters.

To prevent Jordan from falling into the hands of these terror organizations, the institute’s experts recommend a “joint US-European effort (with low-profile Israeli involvement) to strengthen Jordan both economically and militarily.” In addition, they suggest that the United States work toward strengthening the players identified as the “moderate camp,” which objects to global jihad, and establish channels of cooperation among the members of this camp.

One need not be a senior researcher at a prestigious institute to understand that the moderate camp that the United States must strengthen includes the Palestinian Authority (PA) headed by President Mahmoud Abbas.

And what, in their opinion, should Israel contribute to the joint US-European effort to strengthen this camp? Several thousand more houses in the settlements? How is it supposed to “prepare for a scenario of events spilling over across its border,” as they write in their position paper? A few more Palestinians killed?

The medication prescribed by the national defense experts faithfully reflects the views of Israel’s diplomatic-defense establishment. They urge an increase in intelligence on ISIS and its ties with organizations operating within Israel’s borders, to prevent the penetration of Islamic-jihadist elements into the PA and the establishment there of ISIS infrastructure. They also propose that Israel “contribute to the effectiveness of the PA’s governability, security and economy.” How long can one contribute to the “security governance” of an authority under occupation? To what extent can one tend to its “economic governance” without providing it with a diplomatic horizon?

Just as happened in Syria and in Iraq, and absent a savior, the moderate (Sunni) Palestinians will walk away from the political arena and dismantle the PA. Its collapse is expected to have implications for Jordan, and the entry of ISIS into Jordan figures now more than ever before at the top of Israel's security-establishment worry list. Those who did not want the PLO got Hamas. Those who did not want Hamas were left with Iran on one side and al-Qaeda on the other. Anyone who believes in the status quo or in unilateral solutions that will perpetuate the occupation at al-Aqsa and the Cave of the Patriarchs will find global jihad there as well.

On June 22, Prime Minister Benjamin Netanyahu expressed his fear of the possibility that the United States will collaborate with Iran to block ISIS's takeover of Iraq and of Syria. In an interview with NBC, Netanyahu explained that Iran and ISIS are sworn enemies of the United States — and of Israel, of course. "When your enemies are fighting each other, don't strengthen either one of them," he said, adding that one must "weaken both." And whom do you need to strengthen? The answer lies with Netanyahu.

Israel cannot do its part just by giving the Americans advice and berating the Europeans. The malicious rejoicing over US President Barack Obama’s predicament in Iraq is the joy of a poor man doing nothing. Israel cannot bury its head in the sand and ignore the storm brewing in its neighborhood.

Former Prime Minister Ehud Barak, who arrogantly defined Israel as “a villa in a jungle,” refused to understand that for 47 years, Israel has been the one imposing the laws of the jungle on millions of people devoid of basic rights.

Incumbent Prime Minister Benjamin Netanyahu keeps raising the fences surrounding the “villa” and the walls of fear of the “jungle.” He refuses to understand that no wall can ensure that the jungle will not encroach into the villa.