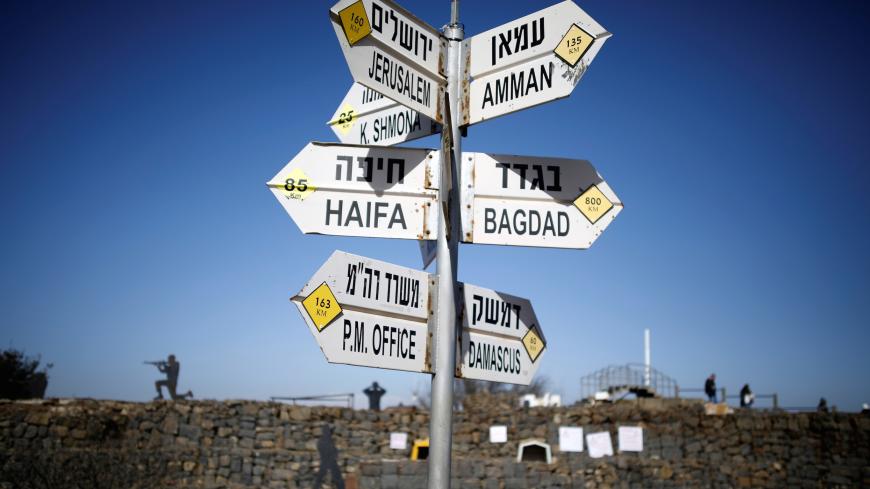 A signpost pointing out distances to different cities is seen on Mount Bental, an observation post in the Israeli-occupied Golan Heights that overlooks the Syrian side of the Quneitra crossing, Israel, Jan. 21, 2019. - REUTERS/Amir Cohen

Even as Israeli Prime Minister Benjamin Netanyahu warmly welcomed the step, former US diplomats and peace process veterans say they saw little near-term security benefit, and possible risks, from US President Donald Trump’s decision — announced in a tweet today — for the United States to recognize Israeli sovereignty over the Golan Heights.

“After 52 years it is time for the United States to fully recognize Israel’s Sovereignty over the Golan Heights, which is of critical strategic and security importance to the State of Israel and Regional Stability!” Trump tweeted.

“President Trump has just made history. I called him. I thanked him on behalf of the people of Israel. He did it again,” Netanyahu gushed, at a meeting with US Secretary of State Mike Pompeo today. “The message that President Trump has given the world is that America stands by Israel.”

Trump’s decision, universally seen as intended to try to boost Netanyahu politically ahead of Israeli elections next month, was taken without evident sign of much serious internal US policy debate.

The State Department referred questions about any policy review to the White House. A White House official declined to comment, indicating there was nothing to add to the president’s tweet.

Former US Ambassador to Israel Dan Shapiro said the status quo of no one talking about Israeli control of the Golan may be preferable to focusing attention on it.

“And that could invite all kind of responses from Russia in the Syrian arena, or elsewhere, such as Ukraine,” Shapiro said. “At the UN … from Arab states, that realistically or otherwise maintain a reference to the Golan Heights in the Arab Peace Initiative. From Hezbollah and a whole range of actors. … The Syrian opposition … now have to take it up.”

“It’s basically upending the status quo that has served US and Israeli interests for a long time … for obvious, transparent, political reasons, without any evidence of a [policy vetting] process that weighed the pros and cons of how our interests and Israel’s interests could be affected,” Shapiro said.

“Politically, it helps Bibi, but comes at the cost to the administration’s own peace plan,” Ross, now with the Washington Institute for Near East Policy, told Al-Monitor. “It will make it harder for Arab leaders to respond favorably to it. They will not want to look like they are acquiescing in the surrender of what they see as Arab land.”

“Ironically, no Arab leader, other than Assad, has any interest in seeing the Israelis leave the Golan Heights but the president’s statement will create an issue where none existed,” Ross said.

The decision could strengthen Iran’s position with Syrian President Bashar al-Assad, give Hezbollah and Iran a propaganda boost and makes US diplomatic efforts to try to find a postwar political solution for Syria harder, said former Syrian diplomat Bassam Barabandi.

“It gives more support for Hezbollah and the Iranians, saying we have to fight for the occupied Golan,” Barabandi, now with the Syrian opposition, said. “It empowers Iran within Syria.”

“It will affect the whole [US Syria envoy Jim] Jeffrey effort for Syria,” Barabandi added. “Syrians will say, how can they trust the Americans or deal with the Americans.”

“From a legitimacy perspective, if you give certain parts of Syria to the Israelis, it makes everyone unbalanced,” Barabandi said, noting the US pushback on Turkish requests for a big buffer zone inside Syria. “Why is the US telling Turkey no? It makes Jeffrey’s position and that of the US Syria team very tricky.”

“The first big downside is that Israel is managing a very difficult sort of game in the Golan area, and in Syria,” Goldenberg, now with the Center for New American Security, told Al-Monitor. “It is balancing this very delicate game with striking the Iranians [in Syria], and dealing with the Russians.”

“The bottom line is this makes things harder for Israel in Syria by focusing on an issue that is not an issue. And politically, poking the Russians and Iranians and in ways that give them the high ground,” Goldenberg said.

“The other big thing is the precedent it sets when the US is still arguing with the Russians over Crimea,” Goldenberg said. “It is legitimizing the acquisition of territory by annexation."

A US official said he was unaware if this would have an impact on the Shebaa Farms issue, which involves a disputed piece of land at the border between Syria, Lebanon and the Golan Heights. Pompeo will travel to Lebanon from Israel this week on the third leg of his Mideast trip.

Hussein Ibish agreed the decision sets a precedent that could have a more far-reaching and corrosive impact on the postwar international order the United States has tried to uphold.

“It is the ultimate triumph of politics over policy,” Ibish, with the Arab Gulf States Institute in Washington, told Al-Monitor. “The decision won’t achieve anything for any national interest, not Israeli, not American. … What it does only is achieve political results for Trump and for his buddy Bibi.”

“This is a death blow to the post-World War II international order; it completely repudiates the basis of the UN charter [that states can’t seize territory of other states], the whole bedrock principle of the postwar order,” Ibish said.

In that sense, he said, “it is one of the most significant diplomatic things the Trump administration has done.”

But former US Ambassador to Syria Robert Ford foresaw a more limited impact.

“I think it will make it more difficult for subsequent American administrations to play a role on Israel-Syrian peace, such as the Obama administration was trying to do in 2010,” Ford said. “But that was a long time ago. American relations with Damascus since 2011 are quite poor. The odds of the Americans being able to pick up a mediation role … are low. I don’t think it is a particularly big deal one way or other.”