With a new Israeli government unlikely to be formed until late October, as the US 2020 presidential campaign heats up, the Trump administration is increasingly unlikely to present the political component of its peace vision before a second term, analysts and diplomats said. 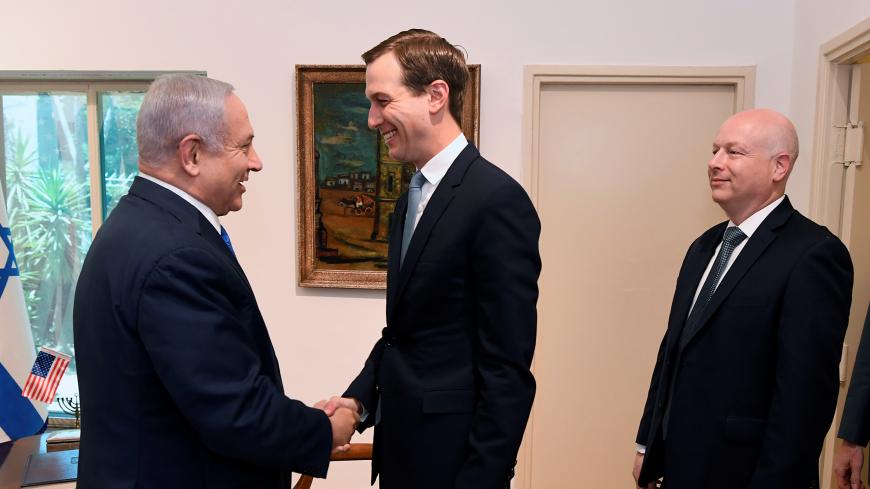 WASHINGTON — While Israeli Prime Minister Benjamin Netanyahu welcomed President Donald Trump’s son-in-law and senior adviser Jared Kushner to his residence with a hug today and shrugged off his failure to secure a governing coalition as a mere “little event,” Trump expressed regret at the rare political setback for his Israeli ally.

“It's too bad what happened in Israel,” Trump told reporters as he departed the White House this morning to travel to the Air Force Academy in Colorado. “It looked like a total win for Netanyahu, who's a great guy. … And now they're back … in the election stage.”

With new Israeli elections now tentatively scheduled for Sept. 17, a new Israeli government is not expected to be formed before late October at the earliest. The extended Israeli political tumult and campaigning into the fall— just as the US 2020 presidential election campaign heats up — greatly reduce the prospects that the Trump administration will present the political component of the Kushner peace plan until after the 2020 US elections, if at all, diplomats and analysts said.

“Now it is the deal of the next century,” mocked veteran Palestinian peace negotiator Saeb Erekat, who has engaged in frequent, angry Twitter exchanges with Trump negotiations envoy Jason Greenblatt, referring to Trump’s expressed aspiration to achieve the “deal of the century.”

Currently, the Trump administration intends to proceed with a previously announced Bahrain workshop on June 25-26 focused on the economic plank of the Kushner peace plan, the White House said. “The Bahrain workshop will go on as scheduled,” a White House official, speaking not for attribution, told Al-Monitor.

Both the Trump administration and Netanyahu may decide that going ahead with the “Peace to Prosperity” meeting in Bahrain may suit their interests, said veteran US peace negotiator Dennis Ross, who assisted the Trump administration on efforts to advance Israeli-Arab relations including by moderating a panel with Netanyahu and Arab foreign ministers at a conference in Warsaw in February.

Ross, currently in Israel, told Al-Monitor by email that the Bahrain workshop “could actually be helpful if it lays out projects for infrastructure for Gaza and the West Bank as part of a stabilization effort. That is badly needed to avoid a blow-up not only in Gaza but also the West Bank, particularly given the financial crisis" in the Palestinian Authority.

He added, “The Bahrain workshop could address that crisis with the Arabs and Israelis and it could also make clear what could be provided and implemented on reconstruction in Gaza assuming there is a prolonged cease-fire there.”

Ross, with the Washington Institute for Near East Policy, also said, “All this could be presented as a stabilization effort designed to create better conditions for when the political part of the plan is unveiled. Since that plan is unlikely to be presented for at least several months, the administration could make a virtue of necessity.”

However, former US Ambassador to Israel Daniel Shapiro said that while the Trump administration may go ahead with the Bahrain workshop, it will be largely irrelevant.

“It will be kind of a Potemkin conference, where there will be phony pledges, against the background of a ghost plan that doesn’t exist … and may never exist,” Shapiro told Al-Monitor by phone from Israel today. “It will be a meeting. It will have the same impact as the Gaza gathering at the White House last year, which is close to zero.”

Shapiro added, “I am sure there is goodwill and there is a desire to make progress, but they should not delude themselves that they can make significant progress on economic programs separate from the necessary political decisions. The region is not structured that way. The actors don’t see their interests advance that way. People will be polite. They will have their Gulf friends say polite, nice words, about how they’d like to support the Palestinian economy. But nothing will materialize from it until the political program can be resurrected.”

Shapiro also said, “If they have to put the plan on ice for the next six months because of Israeli elections, you are putting the whole thing on ice.”

The surprise Israeli elections re-do could be doing the Trump administration a favor by giving it an excuse for delaying the rollout of its political plan while going forward with its economics vision, former State Department peace adviser David Makovsky said.

“In the short term, this may be good news for the Trump administration,” Makovsky, now with the Washington Institute, told Al-Monitor. “They now have a public rationale why they are not going forward with the policy part of the plan [that was not ready yet] anyway.”

He said, “The issue is, can they shift gears to the short term. There are a lot of short-term things they could do that would make a difference on the ground — economic stabilization efforts. But that is not something [the Trump team] have been focused on until now.”

“The broader question to me is, so is the political part just deferred, or fading,” Makovsky said.

Trump is likely to double down on his open efforts to boost Netanyahu’s reelection prospects, even though a unity coalition that might have been formed by another Likud leader with the centrist Blue and White coalition if Netanyahu had stepped down would likely be more supportive of an eventual Trump/Kushner peace plan, said Makovsky.

“I think you have to assume that what Trump did with [recognizing Israeli sovereignty over the] Golan on the eve of the last round [of Israeli elections April 9], that he will find something to help Netanyahu,” Makovsky said. “He genuinely likes Netanyahu, and Netanyahu adores him. If you like the book, you will love the movie. He’s got to keep going.”

Indeed, as Netanyahu engaged in the last hours of trying unsuccessfully to persuade Yisrael Beitenu leader Avigdor Liberman to join his coalition Wednesday, the White House announced in a hastily released press release yesterday that national security adviser John Bolton would meet his Israeli and Russian counterparts in Jerusalem to discussion regional security issues sometime next month. No date for the unusual meeting was specified.

After Netanyahu failed to secure a governing coalition, he lashed out at Liberman, alluding to the tripartite conference as his initiative, suggesting that the timing of the White House announcement was meant to try to help the prime minister's efforts to secure a coalition.

"I proposed to Trump and Putin to form a US-Russia-Israel trilateral committee that will meet in Jerusalem to discuss the security situation in the Middle East and both of them agreed,” Netanyahu said. “This is unprecedented."

Shapiro said the episode suggests Trump’s interventions to boost Netanyahu may have diminishing impact on Israeli voters at this point.

“I think Trump’s interventions [to boost Netanyahu], while blatant, have limited impact,” Shapiro said. “I think it is a great idea to have US and Russian national security officials meet with the Israelis; they have important issues to work through in the region. But as a political benefit, it is much too little, much too late, to make a difference in coalition negotiations.”