The Israeli prime minister, who has long hoped to work with a Republican US president, arrives to a White House in crisis, but early enough, he hopes, to influence policies. 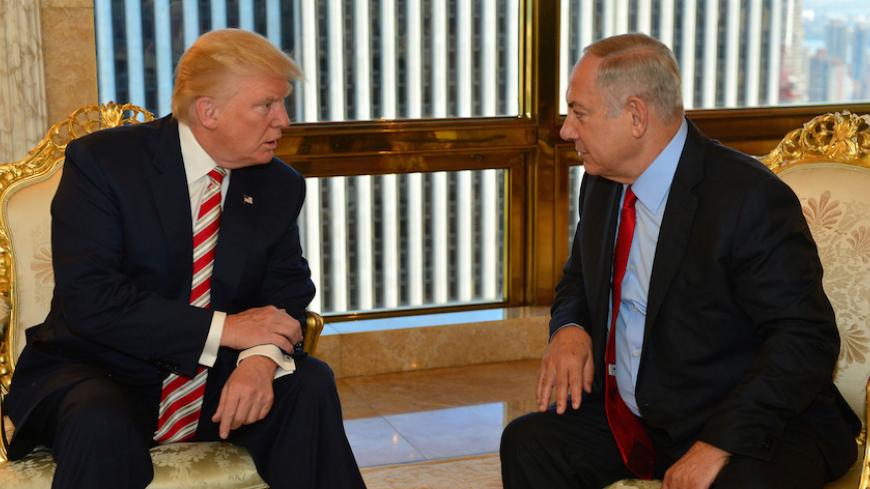 WASHINGTON — Israeli Prime Minister Benjamin Netanyahu, who has long hoped to work with a Republican US president, finds himself arriving to a Trump White House in open crisis, with the resignation of Trump’s national security adviser, Michael Flynn, the night of Feb. 13.

Netanyahu’s acting national security adviser, Yaakov Nagel, had met with Flynn earlier that day to prepare the agenda for the Feb. 15 meeting between Trump and Netanyahu, Israeli Channel 2’s Udi Segal told Al-Monitor. After they wrapped up their talks, they hugged and said they would see each other the next day. Two hours later, Flynn was out, Segal said. The Israeli delegation was stunned.

The White House, for its part, said Iran would be a key part of the conversation on Feb. 15, and reiterated that Trump wanted to advance Middle East peace, but would not seek to dictate the terms.

"We're looking at the two sides to come together to make peace together and we'll be there to help them," a senior administration official, speaking not for attribution, told the White House press pool Feb. 13.

"We're not going to dictate what the terms of peace will be," the official continued, "President Trump has very much indicated that he wants to achieve peace."

“Precious planning hours spent with Flynn [are] now out the window,” Shapiro wrote. There are “major unanswered questions on Russia … and still important business to be done on Iran, [the] Palestinians, Syria and security coop[eration]. But who in the [White House] can focus on it with the fires burning?”

Despite the turmoil in the West Wing, Netanyahu sees clear advantages in getting to influence the Trump administration early and before it has formulated several of its policies, said David Makovsky, a former State Department Middle East peace adviser now with the Washington Institute for Near East Policy.

“For Netanyahu it is important that he is coming early, before policies are kind of set in concrete,” Makovsky said on a call with journalists organized by the Washington Institute on Feb. 14. “Things are very much in flux here in Washington.”

For Netanyahu, “This will be a chance to influence thinking here before there are policy reviews, so it’s the best time for him,” Makovsky said. “It’s also a time when media expectations are bound to be low, because no one is expecting them to come out with any announcement at this early phase of this administration. So you have the advantages from Netanyahu’s perspective on trying to influence thinking in Washington, and no pressure on the Washington side for any deliverables. So it's kind of a sweet spot.”

In terms of what thinking Netanyahu will try to influence, at the top of the list will be Iran, said Makovsky. But rather than urging that the Iran nuclear deal be scrapped outright, “It’s clear the US is in the enforcement school,” Makovsky said. “Israeli national security officials … are also much more focused on enforcement.”

“For Netanyahu … 80 to 90% of their concerns about the nuclear deal are more about what comes after the sunset provisions fade out” after 10 to 15 years, Makovsky said. Netanyahu is likely to press Trump on how the United States and Israel can prepare to work together on these things.

The second cluster of issues Netanyahu will want to discuss with Trump concerns Russia “and how do you drive a wedge between Russia and Iran in Syria,” Makovsky said. “Israel has internalized this idea that Trump is a dealmaker and wants to do a deal with Russia … to fight [the Islamic State]. … Israel wants to know what that deal is and how it affects them.”

“Clearly, from [the Israeli] point of view, what they want out of a [US-Russian] deal is to drive a wedge between Moscow and Tehran,” Makovsky said. “Is there a way to keep Iran and Hezbollah away” from Syria’s border with Israel, he added. “So this is something [where] Israel is trying to put its points across early. … They want to know what the deal is and how it affects Israel.”

Netanyahu may also raise the “strategic convergence” between Israel and the more pragmatic Sunni states, driven by a shared sense of threats such as IS and Iran, Makovsky said. “How do you somehow use this under-the-table convergence to have some more overt, over-the-table cooperation. I think that is going to be a key question,” he said. “And Netanyahu will try to link this very much to the Palestinian issue … and say, well, maybe if we do what he calls the outside-in, versus the inside-out approach, of getting regional players to be supportive, this would give Palestinians political cover to make concessions that they could not make in a bilateral context.”

“One of the things that was very much present in the meeting with Sisi — he had very warm words about Israel and about the Israeli policy and [said] the Israelis are the only ones that understood us,” Feierstein told Al-Monitor.