US diplomats shaken by Trump decision to exit Syria

US President Donald Trump’s abrupt decision to withdraw from Syria humiliates US envoys who have said the United States would maintain a presence indefinitely to prevent the return of the Islamic State and to counter Iran’s influence. 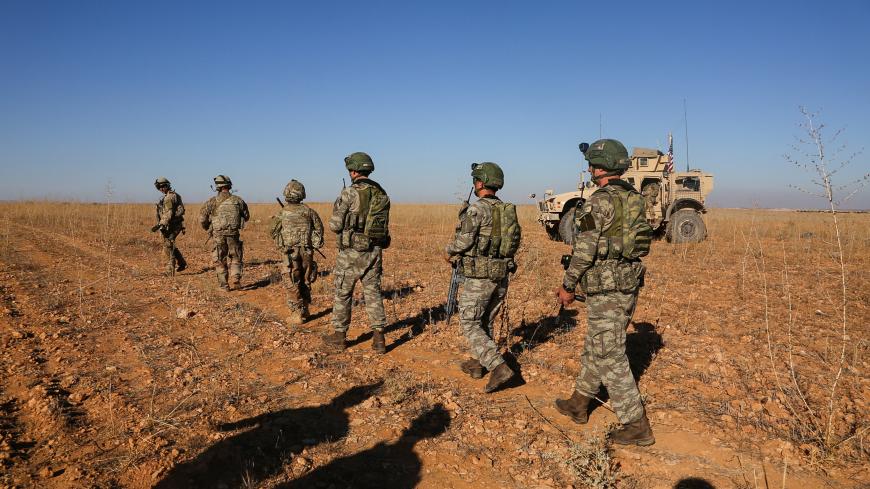 WASHINGTON — After US Syria envoys said for months that the United States would stay in Syria indefinitely to prevent the return of the so-called Islamic State (IS, also known as ISIS) and counter Iran’s influence, the State Department went virtually dark today after President Donald Trump said the US mission in Syria was done with the defeat of IS.

“We have defeated ISIS in Syria, my only reason for being there during the Trump Presidency,” Trump tweeted.

“The president has been very clear in his declarations over the last two years, that the US is not going into Syria to resolve the Syria civil war,” a senior administration official, speaking not for attribution, told journalists on a White House call this afternoon. “What we were going in to do is destroy the territorial caliphate of the Islamic State in Syria.”

“We are under no illusions that ISIS writ large or the scourge of Sunni radical terrorism has in some way gone away,” the official said.

“It was the president’s decision to make and he made it,” the official added, responding to a question about objections from Hill Republicans to the abrupt decision to withdraw. “The president believes very sincerely and has for a number of years that we do not have a military role in ending the civil war in Syria. He has been very clear about that.”

The State Department canceled a scheduled press briefing this afternoon. In response to queries for Syria guidance, it sent around a statement from White House press secretary Sarah Sanders.

“Five years ago, ISIS was a very powerful and dangerous force in the Middle East, and now the United States has defeated the territorial caliphate,” Sanders said in a written statement. “We have started returning United States troops home as we transition to the next phase of this campaign.”

But US officials, speaking not for attribution, and Syria experts who consult with the US administration said that this time they believe Trump’s decision is real, and will not be reversed by a bureaucracy that has urged him to keep US forces in Syria longer.

“This time it’s real and truly catastrophic,” a US official, speaking not for attribution, told Al-Monitor. “The president is just done” and said "leave."

Trump’s decision to withdraw US forces from Syria came in the wake of a phone call between him and Turkish President Recep Tayyip Erdogan on Friday in which Erdogan said Turkish forces could finish off IS remnants and other terrorist groups, Syria experts said.

Secretary of Defense James Mattis, Secretary of State Mike Pompeo and national security adviser John Bolton met Monday, when Trump was said to formally decide on a US withdrawal from Syria. Multiple US officials argued against an abrupt US withdrawal, but were said to have given up trying to get Trump to change his mind by Tuesday night. US officials began to notify allies of the decision Tuesday.

“The push back from DOD, State and NSC stopped [Tuesday] night,” said one regional expert who consults with the US administration, referring to the Department of Defense, the State Department and the National Security Council.

Israeli Prime Minister Benjamin Netanyahu, speaking at a conference this morning, said he had spoken with Trump on Monday and with Pompeo on Tuesday. “Netanyahu said Trump and Pompeo reassured him the US will still have other way[s] to influence the situation in Syria even without forces on the ground,” Israel Channel 10 diplomatic correspondent Barak Ravid wrote on Twitter.

"This is a US decision and we will study its timetable, its implementation and its repercussions for us,” Netanyahu said in a statement. “In any case we will make sure Israel's security is preserved and we will defend ourselves from this arena."

European officials, whose countries have troops serving as part of the US-led anti-IS coalition in Syria, suggested they were blindsided by the abrupt decision, even if notified. “No, do you? Does anyone?” one European official, speaking with evident frustration, responded when asked if he had any guidance to offer on the US decision.

While Trump has repeatedly made clear his desire to bring US troops home from Syria, he has been persuaded in the past by advisers to give the mission more time. It’s not clear that such a reversal will be forthcoming now, however.

“We know Trump’s instincts from the get-go were to get these guys out of Syria,” Tamara Wittes, a former State Department Middle East official now with the Brookings Institution, told Al-Monitor. “And yet, he has clearly been persuaded at several points 'not yet, ISIS is not quite defeated, but we can use [the troop presence] as leverage against Iran.' He becomes persuaded, and then at a certain point, … he decides enough is enough. He just changes his mind.”

Some current and former US officials faulted what they saw as overreach by administration Iran hawks, in particular US Syria envoy Jim Jeffrey and his lieutenant, Joel Rayburn, the deputy assistant secretary of state for the Levant, who have argued publicly that US forces would not leave Syria until all Iranian forces had left.

“The people who work for [Trump] — Bolton, Rayburn, now Jeffrey — make it worse by adding impossible objectives on Syria [involving Iran] that suggest an indefinite stay,” said the US official who called Trump's decision catastrophic. The official said these arguments have “no connection to realistic objectives for our military” and go “way beyond” the goal of defeating IS and preventing its re-emergence.

“Amb. Jim Jeffrey … has long been advancing a Syria policy divorced from the president’s own views,” Wittes wrote on Twitter. “I don’t fault Jeffrey at all for trying to create some coherence and leverage to achieve desirable outcomes. But it was futile without Trump fully on board.”

“The other big US policy loser here, of course, is Pompeo/Bolton/Hook’s Iran policy of 'maximum pressure,'” Wittes added, referring to US envoy on Iran Brian Hook.

The US military presence in Syria, “while it … has one mission, which is the defeat of ISIS, indirectly supports, through secondary effects, other goals,” Jeffrey told journalists at the State Department on Nov. 14. “It, in its work with our partners, indirectly helps affect Iran’s malign activities, and by our presence and by our commitment to security in Syria and in the region, we demonstrate an interest in achieving a political solution.”

Whether or not one supports the decision for a withdrawal of US troops from Syria, the abruptness of the decision is likely to be highly problematic, some analysts said.

Staff with nongovernmental organizations (NGOs) that have been working on stabilization projects in territory liberated from IS were totally blindsided by the decision, said Nicholas Heras, a Levant military expert with the Center for New American Security.

“Everyone was totally surprised,” Heras told Al-Monitor. “It seems there has not been a lot of planning done.”

“Should the US leave Syria in a matter of weeks, as is now rumored, the Assad regime will rapidly step in to buy the loyalty of our Arab allies in the northeast, breaking them away from the Kurdish PYD, who will in all likelihood be left vulnerable to an imminent Turkish military intervention east of the Euphrates river,” Charles Lister, a Syria expert with the Middle East Institute, said. “Trump may well have given this de facto green light to Turkish President Erdogan when they spoke on the phone on Friday.” The PYD is the Syrian Democratic Union Party.

“The Iran hawk wing of the US government’s foreign policy establishment ought to feel betrayed by this decision too,” Lister added. “Demanding Iranian forces leave Syria as part of a negotiated settlement was a boldly unrealistic demand in the first place, but to stick to that position now would look absurd.”

"It was clear from the outset that President Trump was uncomfortable with a long-term US presence in Syria,” said Rob Malley, who served as NSC Middle East adviser for President Barack Obama and now is CEO of the International Crisis Group. “The challenge in carrying out this old-new policy, assuming this time it sticks, is to do so in a manner that does not precipitate a military free-for-all in the northeast for which the Kurds will pay the price."