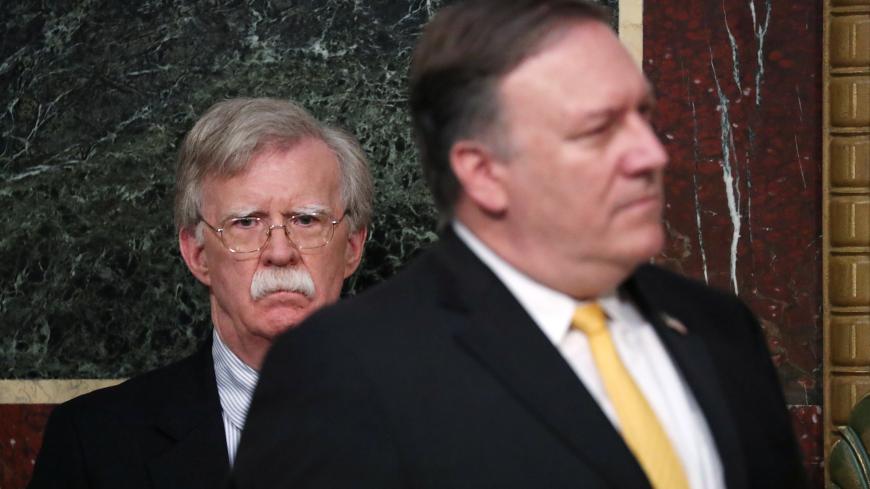 US national security adviser John Bolton and Secretary of State Mike Pompeo attend the annual meeting of the Interagency Task Force to Monitor and Combat Trafficking in Persons at the White House in Washington, Oct. 11, 2018. - REUTERS/Jonathan Ernst

WASHINGTON — Even after Secretary of Defense Jim Mattis resigned over the decision, two of President Donald Trump’s top advisers have offered different messages about his intentions for a Syria withdrawal.

Secretary of State Mike Pompeo has asserted, in both internal briefings and public interviews, that Trump’s instructions are clear and the troops are coming out, while saying the administration’s overall goals for the region have not changed. Meanwhile, national security adviser John Bolton, currently traveling in Israel and Turkey with a press pool in tow, has said any US withdrawal from Syria will be conditions-based, and won’t occur until the so-called Islamic State in Syria (IS or ISIS) is fully defeated and unless Turkey guarantees protection for Syrian Kurdish fighters that Ankara considers terrorists.

“There are objectives that we want to accomplish that condition the withdrawal,” Bolton told journalists traveling with him in Israel on Sunday. “The timing of the withdrawal occurs as a result of the fulfillment of the conditions and the establishment of the circumstances that we want to see. And once that’s done, then you talk about a timetable.”

Pompeo, in a Jan. 3 briefing to State Department personnel who work on Syria, “made clear we are leaving. Period,” a former US official, speaking not for attribution, told Al-Monitor. “He did not mention Iran. Or [Syrian President Bashar al-]Assad. He said we are leaving. That was it. Then he left.”

That stark message was reflected in a public interview Pompeo gave the same day.

“The president is not ambiguous with respect to Syria. Our troops are coming out,” Pompeo told Newsmax in an interview Jan. 3.

“The president also made very clear that we needed to continue the counter-ISIS campaign. …The counter-Iran campaign continues,” Pompeo continued. “We’ll continue to achieve those outcomes. We will simply do it at a time when the American forces have departed Syria.”

Trump, in a tweet today, denied there was any contradiction in administration messages about his Syria withdrawal timeline.

“We will be leaving at a proper pace while at the same time continuing to fight ISIS and doing all else that is prudent and necessary!” Trump tweeted.

But in a sign of uncertainty within the US government over whether conditions for a US withdrawal from Syria had changed, a State Department official directed a query from Al-Monitor today about the Syria withdrawal to the National Security Council. An NSC official, in turn, responded to questions by pointing to Trump’s tweet. “I’d refer you to the President’s tweet from earlier today,” the official said, pasting in Trump’s tweet.

Regional experts who consult with members of the US government said there were signs that Bolton and Pompeo were not on the same page.

“My understanding is Bolton is maximally interpreting his brief — and is attempting to present Trump with a false choice,” Aaron Stein, a Turkey expert and director of the Middle East program at the Foreign Policy Research Institute, told Al-Monitor today. “Leave and it’s chaos vs. stay in a different way and things will be fine.”

“I think Bolton will lose because, once again, his actions are at odds with the directives of his boss,” Stein continued. “Trump wanted US forces out within 30 days, but has accepted the military’s recommendation to leave over the next four months. This suggests US forces will be gone in 2019.”

“The danger, I think, is that in the absence of a hard plan, you get competing fiefdoms,” Stein added. “Bolton and [US Syria envoy Jim] Jeffrey are probably broadly aligned on the need to stage manage the exit, but Jeffrey would never have signaled to Ankara in the way Bolton did. I’m sure Jim is going to have an awful time in Ankara because of things someone else said.”

Bolton’s comments over the weekend on an entirely conditions-based withdrawal from Syria seem out of step with Trump’s instructions, former State Department official Amanda Sloat said.

"I was surprised to see Bolton's comments in the press, which seemingly return to the old strategy — defeat ISIS, counter Iran and diplomatically end the civil war,” Sloat, now with the Brookings Institution, told Al-Monitor. “Trump's tweet this morning suggests he is doubling down on his desire to withdraw and doesn’t want to look managed by his staff.

“These disjointed messages reflect the lack of a real policy process inside the government,” Sloat continued. “Instead, we have decision-making by presidential tweet or pronouncement followed by advisers scrambling to implement Trump's guidance in a more rational way. If nothing else, it makes it hard for local actors to trust what Trump's envoys are telling them when they know it could be undermined by the president."

Veteran former US Middle East diplomat Aaron David Miller said he doubted that Bolton was freelancing so much as trying to do damage control for what he saw as a hastily announced Trump decision to withdraw from Syria made during a Trump phone call with Turkish President Recep Tayyip Erdogan on Dec. 14.

“First of all, this is an effort by John Bolton to make up for what was clearly … a huge missed opportunity, … it is damage control,” Miller, now with the Wilson Center, told Al-Monitor. “It is an effort, however late … to create a measure of leverage on Turkey and perhaps on the Kurds as well to suggest that yes, the president wants to withdraw, but don’t think we are running away.”

Trump, speaking to journalists before departing the White House for Camp David on Sunday, denied there was any walk-back of his December announcement.

“We are pulling back in Syria. We're going to be removing our troops,” he said on the South Lawn. “I never said we're doing it that quickly. But we're decimating ISIS.”

“But with that being said, we're pulling out of Syria, but we're doing it and we won’t be finally pulled out until ISIS is gone,” he said.

Trump also praised both Pompeo and Bolton, and gave no indication he thought Bolton was straying from his instructions.