Pompeo heads to Mideast to stress 'US not going anywhere'

Despite President Donald Trump’s decision to withdraw troops from Syria, Secretary of State Mike Pompeo will stress US commitment to the region and an anti-Iran theme on trip to Jordan, Egypt and Gulf states. 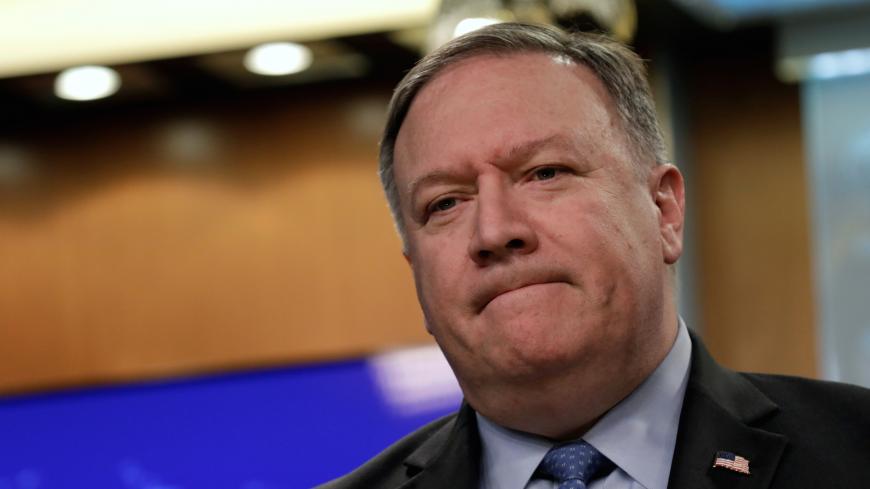 WASHINGTON — Despite President Donald Trump’s decision to pull US forces from Syria, the United States is not leaving the region, and Iran is the top regional menace, Secretary of State Mike Pompeo will stress when he travels to Jordan, Egypt and all six of the Gulf Cooperation Council states next week, State Department officials said today.

“The United States is not leaving the Middle East,” a senior State Department official, speaking not for attribution, told journalists on a State Department conference call today. “ Despite reports to the contrary and false narratives surrounding the Syria decision, we are not going anywhere.”

“Iran is the dangerous actor in the region,” the official continued, adding that the United States will continue to work to galvanize international partners to pressure it.

Pompeo will emphasize those points in a speech in Cairo, the second stop on a trip from Jan. 8 to 15 that will take him first to Amman, Jordan, then Egypt, Bahrain, the United Arab Emirates, Saudi Arabia, Qatar, Oman and Kuwait. The State Department would not confirm a previous White House announcement that Pompeo may also visit Iraq, presumably for security concerns.

In Amman, the trip will reinforce the US commitment to Jordan’s stability and security, especially as it winds down its troop presence in Syria, a second senior State Department official said.

The Trump administration’s efforts to make Egypt the venue for a speech focused on railing against Iran is awkward given Egyptian President Abdel Fattah al-Sisi’s own dismal human and civil rights record, torture in prisons and media oppression. Indeed, CBS’ "60 Minutes" said this week it would air on Jan. 6 an interview with Sisi that the Egyptian ambassador to the United States had requested not be broadcast.

Pompeo will then visit every member of the Gulf Cooperation Council (GCC), still divided by Saudi Arabia and the UAE’s rift with Qatar.

The continued GCC rift “is unhelpful“ and “benefits Iran,“ a fourth senior State Department official said, adding that Washington is still seeking to help close those divisions and build confidence.

He also said the United States was not totally satisfied to date with the Saudi response to the killing of journalist Jamal Khashoggi. “The Saudi narrative or legal process has yet to hit the threshold of credibility and accountability,“ he said.

While US forces will be leaving Syria, the US officials acknowledged, they were at pains to emphasize that doing so will have no effect on achieving the Trump administration’s goals of preventing any resurgence of the so-called Islamic State (IS or ISIS), and the “maximum pressure“ sanctions campaign on Iran. They expressed frustration with media reports on Trump’s Syria withdrawal decision, describing them as overblown.

“Our military posture in Syria may be changing, but our overall goals remain the same,” the second senior State Department official said.

The drawdown of US forces from Syria “will be done in [a] deliberate, heavily coordinated way with allies and partners" to "maintain pressure on ISIS throughout" and prevent "any vacuum for terrorists," he said.

“The president is not ambiguous with respect to Syria. Our troops are coming out,” Pompeo said in an interview with Newsmax Thursday. “The president also made very clear that we needed to continue the counter-ISIS campaign. … The counter-Iran campaign continues. We’ll do all of those things. We’ll continue to achieve those outcomes. We will simply do it at a time when the American forces have departed Syria.”

“I can’t give you a timeline,” Pompeo added.

Meanwhile, national security adviser John Bolton departed today for Israel and Turkey for consultations on how to coordinate a US troop drawdown from Syria in a manner that protects Syrian Kurdish forces that have led the US counter-IS campaign on the ground, as well as that prevents Iran from expanding its military footprint in Syria. He will be joined in Turkey by US Syria envoy Jim Jeffrey and the chairman of the joint chiefs of staff, Gen. Joseph Dunford, he said.

Jeffrey, in addition to serving as the US special representative for Syria engagement, will take on the role of the special envoy for the global coalition to defeat IS, previously held by Brett McGurk, the State Department said today.

“With this additional responsibility, Ambassador Jeffrey will lead and coordinate US Department of State relations with the Global Coalition to defeat ISIS and Department efforts to implement President Trump’s announcement of a responsible US troop withdrawal from Syria that is coordinated with our global Allies and partners,” the State Department said in a statement.