The Donald Trump administration has named former US Ambassador to Iraq and Turkey James Jeffrey to coordinate all aspects of US Syria policy. 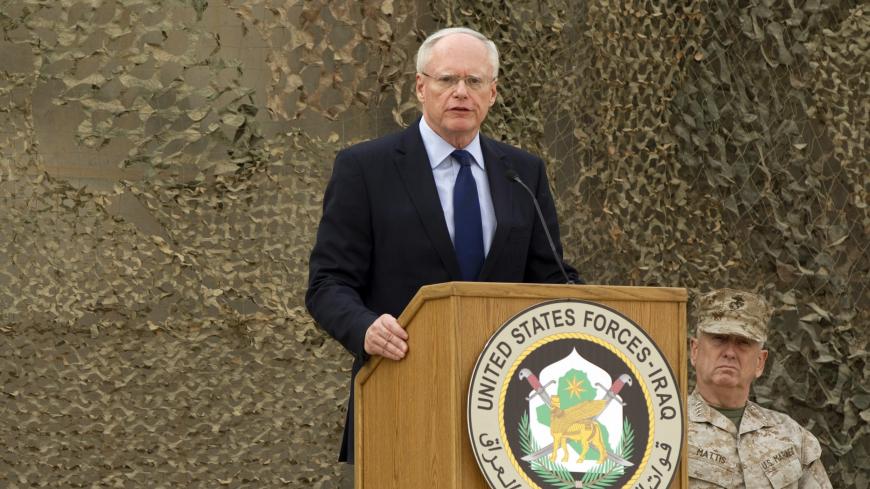 Then-US ambassador to Iraq James Jeffrey (L) speaks during a ceremony for the U.S. military to retire its ceremonial flags, signifying the end of military presence in Iraq, at the Baghdad Diplomatic Support Center in Baghdad Dec. 15, 2011. - REUTERS/Lucas Jackson

WASHINGTON — Nineteen months into the Donald Trump administration, Secretary of State Mike Pompeo has named a high-level diplomatic team to work on Syria. In the final stages of the military campaign to combat the Islamic State’s (IS) physical presence in Syria, Trump has expressed continued misgivings about funding any post-war stabilization.

“The United States has ended the ridiculous 230 Million Dollar yearly development payment to Syria,” Trump tweeted Aug. 18. “Saudi Arabia and other rich countries in the Middle East will start making payments instead of the U.S. I want to develop the U.S., our military and countries that help us!”

On Aug. 17, Pompeo swore in former US Ambassador to Iraq and Turkey James Jeffrey as his special representative for Syria engagement. The State Department also named retired US military officer Joel Rayburn, who until recently served as the National Security Council senior director for Iran, Iraq, Syria and Lebanon, as the deputy assistant secretary of state for Near Eastern Affairs and Syria special envoy.

In their new roles, Jeffrey will coordinate all aspects of US Syria policy and support for a political solution, outside of the counter-IS mission led by Brett McGurk. Rayburn will serve as Jeffrey’s deputy, focusing on Jordan and countering Hezbollah, State Department officials said.

“Jeffrey will serve as the secretary’s adviser for and the department’s primary contact on all aspects of the Syria conflict, apart from the Syria components of the [IS] campaign,” State Department spokeswoman Heather Nauert said on a State Department press call on Aug. 17. “Given all the countries and the issues involved, from terrorism to refugees, these matters obviously cut across geographic bureaus, and therefore this requires a high level of coordination.”

“Rayburn is focusing on issues related to ending the Syrian conflict, emphasizing our strong opposition to Hezbollah and the importance of a strong Lebanese government, and the coordination of our strong bilateral ties with Jordan,” Nauert said.

Despite the fact that Trump was touting cutting some $230 million in US funds allocated for Syria post-war reconstruction, US officials said the Trump administration was committed to staying in Syria as long as it took to defeat IS and prevent its return.

“There should be no doubt as to the position of the president with respect to the broader issue of the US enduring presence in Syria,” acting Assistant Secretary of State for Near Eastern Affairs David Satterfield said on the State Department press call on Aug. 17. “We’re there for the defeat, the enduring defeat of [IS]. And that’s a message which the president has conveyed to President Putin, which all of us in the US government have conveyed to all of our interlocutors.

“What we have done, and the reason for this announcement and this discussion, is we have mobilized the critical international support that the president very much wanted to see and which the international community has responded to quite positively,” Satterfield continued.

Satterfield said the United States would be firm in its insistence that no US or Western funds be allocated for reconstruction in parts of Syria under President Bashar al-Assad’s control until the United Nations determines that there has been progress in talks for a political process in Geneva.

“There is not going to be, by international agreement, reconstruction assistance to Syria unless the UN — not Moscow, not Washington, not any other capital, the UN — certifies, validates that a credible and irreversible political process is underway,” Satterfield said. “That’s the door to getting what we believe the regime, the Russians very much want, which is international money flowing into the wreckage that is presently Syria.”

Jeffrey, a 35-year veteran diplomat who enjoys good ties with the Turks, brings significant experience dealing with US bureaucracy and with many of the governments in the region and Europe.

“For the first time, the Trump administration is approaching Syria the way it should be approached,” Randa Slim, who leads a US-Russian Track II Dialogue on Syria for the Middle East Institute, told Al-Monitor. “They have appointed a high-level, experienced diplomat to look at Syria and to have a comprehensive approach.”

Jeffrey’s good relations with and diplomatic experience in Turkey may be especially helpful for trying to insulate the US-Turkey efforts on Syria from other aspects of the troubled relationship, said Syria expert Charles Lister.

“What is most fascinating to me is Jim [Jeffrey]’s appointment comes of course right now where the US relationship with Turkey is at the lowest level it has been in a long time,” Lister, with the Middle East Institute, told Al-Monitor. “Jim is known to have good relations with Turkey. His position appears to be pivoting himself to perhaps strengthening dialogue with the Turks and insulating the Turkish Syria policy from the rest of our problems with Ankara, which is clearly a priority.”

“I think another aspect of his role will probably be to re-establish a more effective US relationship with the broad spectrum of the Syrian opposition, in order to play some role with the political process,” Lister said.

Lister noted that when Rayburn made a recent trip to Turkey in his new role, some of his scheduled meetings with various Syrian opposition figures there got canceled. However, another Washington Syria analyst, speaking not for attribution Wednesday, said it is his understanding that Rayburn’s meetings with the Syrian opposition ultimately got moved from Istanbul to Ankara, but did take place.

The new appointments may also advance prospects for reviving dormant UN-brokered Syria political talks in Geneva. With Russia pushing to unblock international reconstruction assistance for Syria, “Trump might see an opportunity … [to] say, now it is time to talk politics and put Geneva back on the table,” Lister said.

But with Assad signaling he may be preparing to retake one of the last remaining rebel strongholds in Idlib, northwest Syria, Jeffrey faces significant challenges, said Levant military analyst Nicholas Heras. While northwest Syria has some 4 million people, some of whom might be forced to flee any military offensive toward Turkey, it also is a base for al-Qaeda linked militants, Heras said.

“There is a sword of Damocles hanging over Jeffrey’s effort,” Heras, with the Center for a New American Security, told Al-Monitor. “Right now, the Assad regime and Russia are [preparing] a military operation on at least part of greater Idlib. … This situation will be the first test of Ambassador Jeffrey as Syria envoy, as … an interlocutor between the US government and [Turkish President Recep Tayyip] Erdogan government in Turkey.

“The dirty secret no one wants to talk about is that the job requires Turkey, or Turkey and the Syrian opposition, to go after al-Qaeda in Idlib, and the best groups to fight Assad in Idlib are al-Qaeda and its fellow travelers,” Heras said.

Update: Aug. 22, 2018. This piece was updated to note conflicting accounts of whether the Syrian opposition met with Joel Rayburn in Turkey.